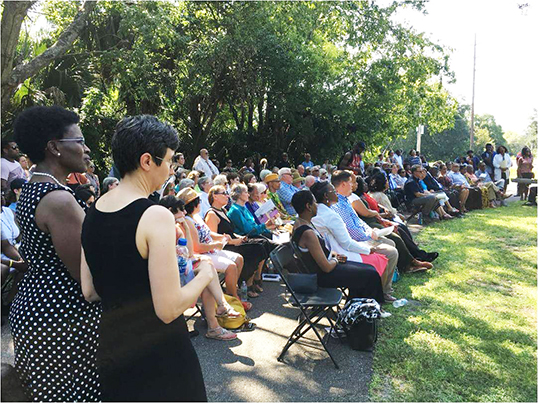 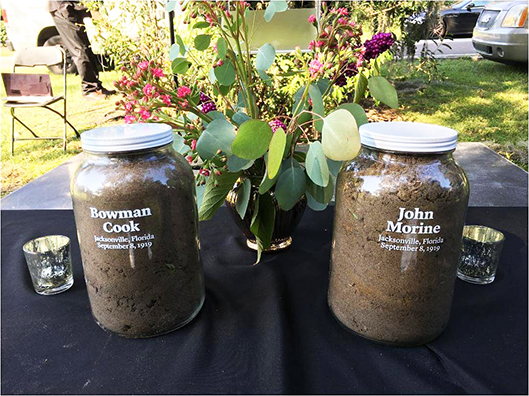 Members of the Jacksonville Community Remembrance Project and interested volunteers attended a Soil Collection Ceremony to commemorate the 100th anniversary of the lynching’s of Bowman Cook and John Morine on September 8, 1919. The ceremony was held inside the Evergreen Cemetery on Main St.  The men had been charged with murder after a white businessman, the brother of a justice of the peace, was killed in a fight in downtown’s La Villa area. The men were incarcerated when another black man was charged with molesting a 12-year-old white girl and about 50 armed white men decided to take the molester from jail and kill him.
Between the Civil War and World War II, thousands of African Americans were lynched in the United States, including at least seven known lynchings in Duval County.  EJI has documented more than 4,000 racial terror lynchings in 12 Southern states between the end of Reconstruction in 1877 and 1950. According to EJI, “Public acknowledgment of mass violence is essential not only for victims and survivors, but also for perpetrators and bystanders who suffer from trauma and damage related to their participation in systematic violence and dehumanization. Yet most lynchings, and their victims, have never been publicly recognized.”
The collecting of soil is intended to bring community members closer to the legacy of lynching and to contribute to the effort to build a lasting and more visible memory of our history of racial injustice. This ceremony included messages from local faith leaders, Bishop Rudolph McKissick Sr., Reverend Kyle Reese and Bishop Adam J. Richardson Jr.
Guests was able to witness the soil collection, reflect and connect with community members involved in the project. The Jars of collected soil will be kept in the community and a duplicate set of jars will be incorporated into exhibits in the Legacy Museum in Montgomery, Alabama. A crucial component of reducing barriers to opportunity is a better understanding of our community’s history.