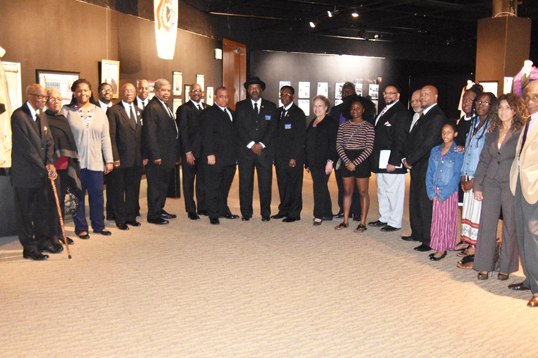 By Adonnica Toler
Founded in 1870, this Black Masonic Grand Lodge has been instrumental in providing black leaders since its inception. Grand Lodge members A.L. Lewis, (Florida’s first Black Millionaires), Alexander Darnes (Jacksonville’s first Black physician), Henry B. Delaney (America’s first elected Black Episcopal Bishop) and James Weldon Johnson, a lawyer and songwriter who wrote  “Lift Every Voice and Sing” which became known as the Black national anthem. Missionary Eartha White and Clara White, mother and daughter who served and advocated for social justice for the  poor, women and the elderly, and a host of others who were civic leaders, lawyers, church leaders, business leaders and educators have come through the doors of the historic Black Masonic Grand Lodge and changed the face of history.  This exhibit now on display at the Ritz Theatre and Museum, is the result of countless hours of research in the Grand Lodge archives and other historic data by the Grand Lodge Historian and noted author and historian Gerald Urso.
Curated by Adonnica L. Toler, Museum Administrator, this exhibit will travel across the state of Florida and eventually the United States. The Ritz Museum is inviting the community to come and experience this rich and  relatively obscure historic treasure about one of the most tumultuous periods in American history: from Reconstruction to Jim Crow. Exhibitors will learn about the black men and women who came from influential African American institution in Jacksonville and became some of the greatest Black leaders in our country.
“As the 18th Most Worshipful Grand Master, it is my pleasure to invite you to the Ritz Theatre and Museum to experience this vast history that highlights the impressive contributions of those who were prominent members of the Most Worshipful Union Grand Lodge and Order of the Eastern Star.  Upon entering the exhibit, you will be mesmerized and enthusiastically uplifted by the lives, legacies and loving historical accomplishments my by these significant members of our African American community,”  said Honorable Walter Gulley, Jr.