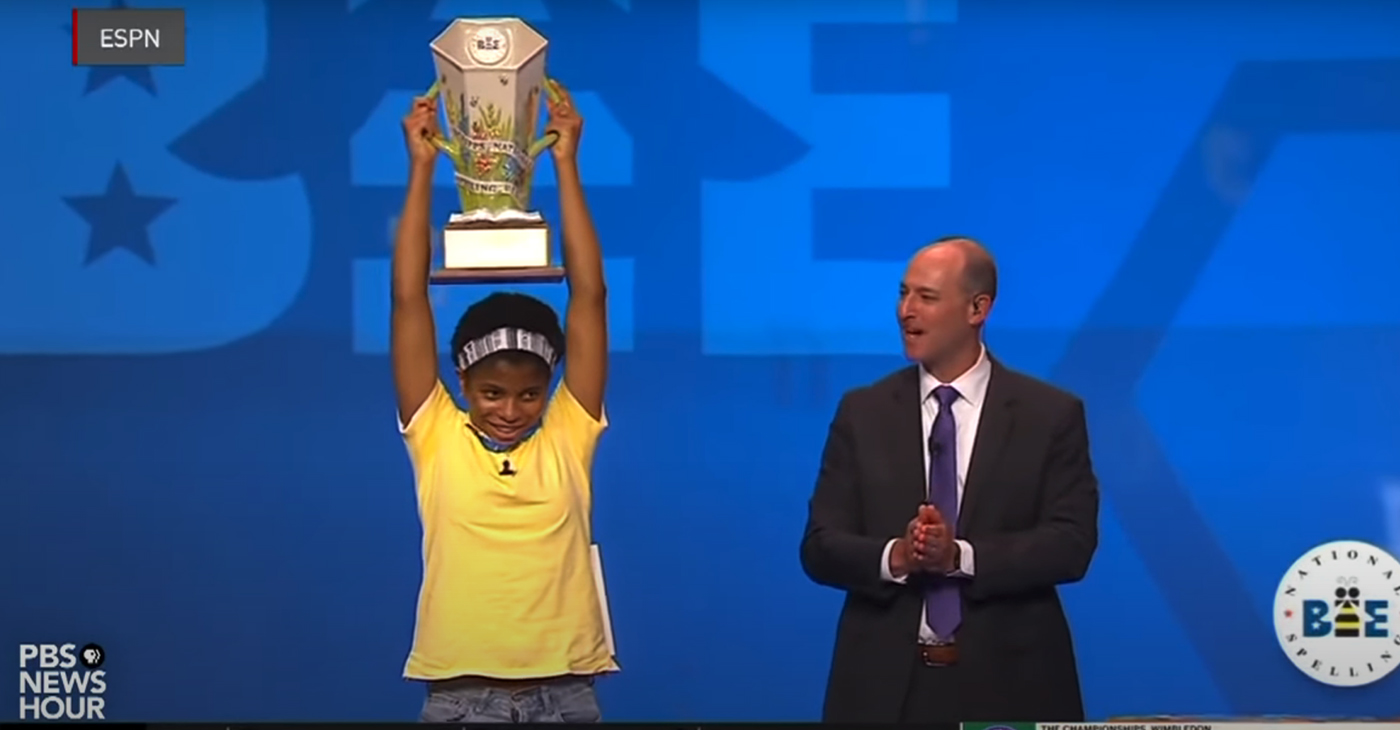 Zaila Avant-garde made history Thursday as the first African American student to win the Scripps National Spelling Bee. The word she spelled correctly to win was “Murraya,” which is a genus of tropical Asiatic and Australian trees. Her victory during the final round also means she is the first Black champion since Jody-Anne Maxwell in 1998. Lisa Desjardins reports on her life and accomplishments. (Photo: Screen Capture from PBS News Hour Video / YouTube)

Zaila Avant-garde twirled around in a spin, her smile radiating from the clear braces covering her teeth as confetti fell from the ceilings.

The 14-year-old from Harvey, La., had reason to twirl and spin, and most importantly, she had more than enough reasons to smile.

After spelling the word “Murraya,” a genus of tropical Asiatic and Australian trees, Zaila became the first African American to win the Scripps National Spelling Bee.

The contest has existed for nearly a century.

“Now I get to get a nice trophy, which is the best part of any win,” Zaila exclaimed in an ESPN interview right after her history-making victory.

“Not only has she competed in spelling bees for two years, she already holds three Guinness World Records for dribbling, bouncing, and juggling basketballs. All before the ninth grade,” New York Times writer Maria Cramer noted.

In an interview with “Good Morning America,” Zaila remarked that she hopes that more African American students would participate and fare well in the Scripps Spelling Bee. “It is a gate-opener to being interested in education,” Zaila proclaimed.

Celebrities and others praised Zaila for her victory.

“There’s a Black girl from New Orleans named ZAILA AVANT GARDE currently competing in the Scripps National Spelling Bee today, and no one talks to me about anything else,” movie producer Franklin Leonard tweeted just before Zaila’s victory.

The website www.latestcelebarticles.com celebrated the victory by adding Zaila to the A-list.

The site’s authors detailed Zaila’s journey, noting that she was the regional spelling champion in New Orleans in 2019.

She is the IJA Juggling Silver Medalist and Kaplan Hexco Bee Champion, according to her Instagram bio.

Zaila achieved her first world record in 2019 for the most bounce juggles with three basketballs in one minute at 231.

Zaila classified spelling as a “side pastime” despite having practiced for seven hours each day.

“She is a basketball prodigy who aspires to play in the WNBA one day and owns three Guinness World Records for simultaneously dribbling several balls,” the website noted.

The Spelling Bee championship came down to Zaila and Chaitra Thummala, a 12-year-old from San Francisco.

Chiatra misfired on the word “neroli oil” and opened the way for Zaila to claim the title.
An official told her to spell “Murraya” and explained that it meant a genus of tropical Asiatic and Australian trees having pinnate leaves with imbricated petals.

“Does this word contain like the English word ‘Murray,’ which would be the name of a comedian?” Zaila asked.

She then asked for the language of origin before nailing it.

“I got it,” Zaila exclaimed.