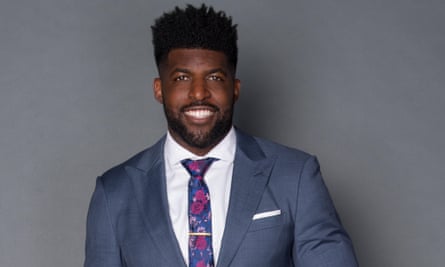 What’s in a name? Power, says Emmanuel Acho. Before he was a standout football player turned TV commentator, he was the Nigerian kid with the biblical name that had all the kids fumbling for something else to call him. At his predominately white private suburban high school, he was “Manny.” To a mostly black gridiron cohort at the University of Texas, where he’d distinguish himself at linebacker on a college football powerhouse, he became “Acho” to differentiate him from his older brother, who had the privilege of being called by his first name, Sam – and who, like him, would go on to have a career in the NFL.

In time, Acho found inside those locker room walls the kind of open and meaningful discussions about race and culture that most on the outside would rather not have. “The locker room is what our society needs to look like,” says Acho. “You have people of different races, different religions. But because you have a common goal of beating the opponent, you don’t care about everyone’s differences. What we haven’t yet realized [as a society] is our opponent is oppression. The opponent is hatred, systemic injustice.”

The more he bounced between film study sessions with his mostly black American position group to afternoons on the farm with his mostly white offensive line teammates, the more he found himself explaining one race to the other and bridging the gaps in between. Since transitioning from the NFL to co-hosting the weekday debate show Speak for Yourself on Fox Sports 1, the 30-year-old Acho has cemented his reputation as a cultural translator who is by turns keen, kind and patient. To hear him tell it, white friends and viewers are constantly hitting him up with questions on everything from how to prepare their biracial children for a relatively harsher life than their parents, to: “Why do I have to bleep myself when I’m singing in the car to a black-authored song?” It was enough to fill a book. So he did.

That book, Uncomfortable Conversations with a Black Man, debuts in the UK this week after a bestselling run in the United States. And it builds on his viral YouTube series of the same name, which is less about what’s being talked about than who’s doing the talking: the skier Lindsey Vonn, the actor Matthew McConaughey, a police department in California. The book, on the other hand, not only adds the missing context of 400 years’ worth of enslavement, subjugation and disenfranchisement as context, but sums it all up with a breezy succinctness that is careful not to lay any blame at the feet of its intended audience. Where Ta-Nehisi Coates’s Between the World and Me stokes white guilt by relating the hollow pain of his all too familiar black experience, Uncomfortable reads more like an FAQ page writ long. Struggling to wrap your head around the idea of reverse racism? Turn to page 83.

I don’t say that to sound glib. I say that to point out just how intuitively Acho – who, in 2013, famously shared a Philadelphia Eagles locker room with a black quarterback who went to prison for dog fighting, and a white receiver who was caught on tape dropping the N-word – understands how little his intended audience is interested in being scolded or otherwise made to feel bad or, worse: responsible. And it’s further telling that he might never have taken the conversations public if the police killing of George Floyd hadn’t triggered a global reckoning on race. “I was sitting down with some dear white friends of mine, two couples, white people that I would consider brothers and sisters of mine,” he says. “And I was distraught. I said, ‘We have to figure out how to fix this problem’. I asked them, ‘What is it about black people that makes white people so scared?’ They asked me, ‘How can we get exposed to more black people?’ I said, ‘Well, you know, you could go to a black church.’ One of them responded, ‘We thought that was y’alls thing.’
“As soon as they said that, I got it. White people, even my dearest white brothers and sisters who I know love me to death, they don’t understand the jurisdiction, or lack thereof, of black culture and black things.”

Uncomfortable draws those jurisdiction lines and tiptoes them just as easily. It’s equal parts rulebook and playbook. Each chapter closes with racism counteroffensives that run the gamut from subscribing to NPR’s Code Switch podcast to advocating for Second Look legislation. Well-meaning white allies will find the book a handy reference, but that’s not to say non-American members of the black African diaspora can’t get something out of it, too. “During the uprisings after the murder of George Floyd, I vividly remember hearing the Black Lives Matter chant in the sweetest British accents,” says Acho, adding that a not-insignificant chunk of his questions come from UK followers. “I realized then that there are so many of those same issues across the pond. The difference is America has such a visceral reaction because of the history of the issues that isn’t as widely known in the UK. The same issues are being faced all over the world.”

What’s more, the world might not be reckoning with them at all if it hadn’t been for an uncomfortable conversation that started in a football locker room and ended with Colin Kaepernick taking a knee during the national anthem to bring awareness to these issues at the expense of his professional career. Just this past August, Acho interviewed Roger Goodell for his YouTube series. And while the NFL commissioner stopped short of apologizing to Kaepernick, Goodell did concede that he wished he had listened to him sooner. “It’s kinda like when I tell my friends about the death, poverty and malnourishment in Nigeria, and they’re like, ‘OK, I get it,’” says Acho, who travels to the country regularly on medical missions. “But then when I bring them over with me, now they really get it.”

“I feel like Goodell is getting it now,” Acho adds. “Now he knows the problem exists and can work to fix it.

Doubtless there will be parts of Uncomfortable that will more than live up to the title for some. Ideally, President Trump reconsiders his meaning for the phrase “locker room talk.” (I have a dream…) Either way, it certainly doesn’t hurt to have another white allyship guidebook in circulation, one that can be read in a sitting to boot. And a manual written by Emmanuel? Well, who could deny the authority in that?

For more on the original article visit: https://www.theguardian.com/sport/2020/dec/02/emmanuel-acho-uncomfortable-conversations-with-a-black-man-nfl