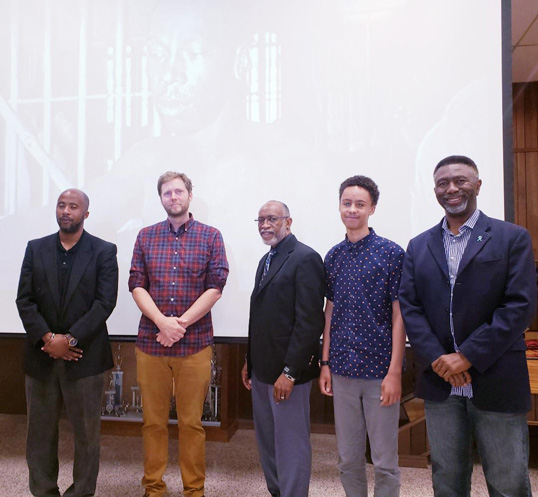 Time Simply Passes is a film about James Joseph Richardson, an African American orange picker in Florida who was wrongly convicted of murdering his seven children in 1967. He spent 21 years in prison, until he was released in 1989 when the conviction was overturned due to miraculous circumstances.  Since then, 84 year old Richardson has been surviving on donations from friends while attempting to receive compensation from the state.
Florida born producer Ty Flowers created the documentary which focuses on race, Florida, the evolution of small town justice, and the systematic corruption still prevalent in government.
The film makes an extensive use of archival footage, photographs and documents and to piece together many a story over 40 years in the making. It began decades ago when a then 31 year old Richardson, came under suspicion after he told DeSoto County Sheriff Frank Cline that he had talked to an insurance agent two days before the death of his children about getting $500 policies on each of the children, a $1,00 policy on his wife and a $2,000 policy for himself. He was eventually sentenced to death after a myriad of false evidence against him.
Fast forward to 1989 and it was revealed a neighbor, Betty Reese who at the time of the 1967 crime was on parole for fatally shooting her second husband (her first husband died after eating a meal she prepared for him, but she was not charged), had a motive for inflicting harm on the Richardson family. Reese’s husband had left her for a cousin of Richardson, Reno said.
Richardson was released from prison and on May 5, 1989 and the case was dismissed.
Richardson later filed a wrongful lawsuit against DeSoto County that was settled for $150,000 and in 2008, he filed a claim seeking compensation from the state of Florida, but was denied. In June 2014, Florida Governor Rick Scott signed a bill authorizing payment of more than $1 million to Richardson.
Recently Jacksonville was the scene for the screening of Time Simply Passes at the IBEW Hall in Springfield.  Hundreds attended the Jacksonville debut which documents Richardson last day of work as an orange picker and his final days in prison after 20 years of suffering in the penal system. Following the film, a panel discussion and Q&A was held with panelist and the audience to discuss the ills and disparities of the Justice system. “We wanted everyone to come out to view this film. Everyday there’s a news story on men that have been in prison for decades.  The injustices are many and the stories of release are few,” said felon advocate Tony Hill.
Richardson children died after eating a poisoned breakfast containing pesticide.  At the time of the murders Richardson, was living in Arcadia, Florida, with his wife Annie Mae Richardson and the children. At a trial in Fort Myers, Florida, an all-white jury found him guilty of murdering the children and sentenced him to death. The death penalty was overturned in 1972 and his sentence was reduced to life imprisonment.  He was then exonerated in 1989, after 21 years, when his case was revisited by appointed Miami-Dade County prosecutor Janet Reno.  He now lives in Wichita, Kansas.

Ty Flowers along with his father Charles Flowers co-produced the film helping to turn it into such a major focal point which led to James release.  For his work on the case Flowers was nominated for a Pulitzer, and won the RFK award for journalism in 1989.