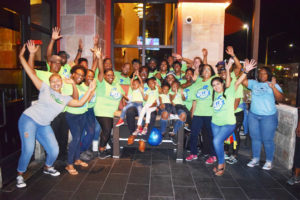 After running a highly competitive race for the School Board four years ago against an incumbent, Darryl Willie won a close race on Tuesday night.

Willie will represent School Board District 4, a seat currently held by Paula Wright who leaves office because of term limits.  Willie beat Cynthia Smith a local educator, by a margin of roughly 52% to 48%.  The two faced each other after a crowded primary election that included six candidates.

Touting his passion, experience and commitment to education, the second time candidate used support from the Chamber of Commerce and other political bodies to out fundraise Smith.

Willie has over 15 years of elementary and college level teaching experience. Supporters say that he has consistently been an advocate for helping students succeed in their educational journey and to actualize their potential.

The new School Board Member is promising to hold himself accountable for the success of every student and create clear and consistent communication structures that inform and engage students, parents and families.

Willie’s first agenda item is to create a five-year forecast with benchmarks to track growth and build a wrap around plan for struggling schools involving local businesses and community leaders.  Teachers will be excited to hear that Willie says another key agenda item is to work with the unions and State Legislature to increase teacher salaries through millage increase and bond referendums.

Recognized as a non-profit emerging leader, Willie was a member of Leadership Jacksonville class of 2016, and received the “Jacksonville Business Journal’s” Top 40 under 40 award.