Breaking news
For more than 17 years, the Potters House church men’s basketball ministry has been on the court shooting hoops at their church location on Normandy Blvd. Throughout the years, the courts have become a gathering place for hundreds of young adults and mentors to play one-on-one or team game competitions to relieve stress and create an atmosphere of brotherhood. “These courts provide our members and the community a safe place to play basketball and without a new surface, we did not want to have any injuries, “said church member and mentor Tyrone Ferguson. 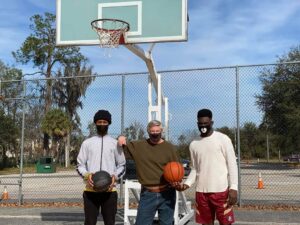 Over the last few years, the property’s three courts have fallen prey to dilapidation and in need of refurbishing.  To assist with the new court, church member Don Foy, enlisted Councilman Matt Carlucci to see if the city could help the church renew the courts. Help was soon on the and the new courts matting surfaces are named after the Los Angeles Lakers, the Miami Heat and Orlando Magic representing the two Florida National Basketball Association (NBA) teams. The courts are open to the public most nights for community use. Following the completion of the resurfacing, stakeholders took to the courts for an all day basketball fest. Ferguson and Carlucci guarded each other and was all smiles as they played against the 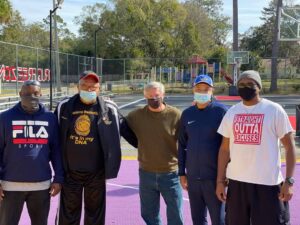 teens who threw the winning shot!