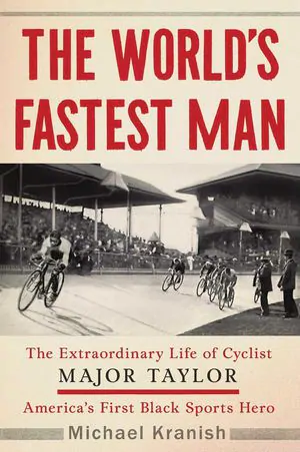 In the frigid December of 1896, more than 12,000 people jammed into the old Madison Square Garden on the East Side of Manhattan for the most hyped sports event of the year. It wasn’t a boxing match or a basketball game but a grueling, six-day indoor bicycle race. The huge crowd gathered not just to see men in woolen shorts and beanies bike around the clock, for more than 1,700 miles, on a slick parquet oval built inside the Gilded Age arena. They filled every seat and stood in the rafters to confirm reports in the tabloid press that one of cyclists was black. Sure enough, a dark-skinned, 5-foot-7 18-year-old from Indianapolis won a preliminary heat and then held on to finish in eighth place, withstanding several painful crashes and at times slumping in exhaustion over a pillow attached to his handlebars. The spectacle put Marshall Taylor, known by his nickname “Major,” on the national map, and he was on his way to becoming one of the greatest sprinters in what in that era was America’s most popular sport.

For anyone interested in cycling, technology or social history, Michael Kranish’s “The World’s Fastest Man” offers a fascinating ride. Kranish, a Washington Post reporter, shows how in the decades before the invention of the automobile and the airplane, the bicycle served not just as an instrument of pleasure and convenience but as a vehicle for sweeping economic and social change. In the 1890s, America boasted 250 bicycle factories and 30,000 bike shops, with sales of 4 million two-wheelers. Suffragist Susan B. Anthony declared that cycling “has done more to emancipate women than anything in the world.” Teddy Roosevelt, then New York City’s police commissioner, created a “scorcher squad” of bike-mounted cops, enhancing the reformer image that followed him to the White House. One in three new engineering patents involved cycling technology, and among the inventors working to extend its potential were Henry Ford, whose gas-powered Quadricycle prefigured the Model T, and the Wright brothers, the bike merchants from Dayton, Ohio, who would design the first planes capable of sustained flight.

As a human drama, Kranish’s narrative is more elusive. On his way to setting more than a dozen speed records, for distances from a quarter-mile to two miles, Taylor faced off against a cast of memorable rivals. There was Eddie “Cannon” Bald, a conceited self-promoter and casual racist; Arthur Zimmerman, a kindly innovator of racing and training techniques; and Floyd McFarland, an imposing 6-foot-4 giant from California. When Taylor made a tour of Europe, there was a dashing and haughty French nemesis, Edmond Jacquelin, on whom Taylor exacted sweet revenge in a series of seesaw races in Belle Epoque Paris. There were also white heroes : the Southards, a prominent Indiana family who employed Major’s father as a coachman and welcomed the black boy into their home as a playmate for their son; and Louis “Birdie” Munger, a onetime cycling champ who gave the teenage Taylor work as a houseboy and a bike factory hand and then oversaw his introduction to professional racing.

Yet throughout his meteoric rise and ultimate sad decline, Major Taylor himself remained an enigmatic and distant figure. Kranish chronicles the many racial indignities he suffered, from repeated attempts to ban blacks from U.S. racing to segregationist hotel snubs and vile cartoons depicting him as an ape. But Taylor rarely betrayed how these humiliations affected him, beyond a dogged determination to carry on with the show. In one of the book’s most vivid scenes, he returns to Indianapolis to race for the first time in front of his father, Gilbert Taylor, a black Civil War veteran so proud of his service in the Union Army that he still dressed up in uniform. After his son’s victory, Gilbert does not congratulate him and only wants to know why Major didn’t “beat those white boys further at the finish line.” Apart from that poignant exchange, though, there are few clues as to how a desire to impress an intimidating, disapproving father might have driven Taylor’s tireless athletic quest.

Near the height of his fame, in 1902, Taylor married a light-skinned beauty named Daisy Morris. Daisy gave birth to a daughter named Sydney, born in Australia while Taylor was racing there, and they settled into a life of comfort in a grand house in Worcester, Mass. But by the time of Taylor’s death in 1932, the marriage had fallen apart, Major had gone bankrupt from a failed bike tire venture, and he was living in a Chicago YMCA on meager sales of a self-published autobiography. Seven decades later, Kranish tracked down Sydney, then 96 and residing in a Pittsburgh nursing home, and she was still struggling to understand the estranged father whom she last saw at a school graduation in 1925. “Sydney had been bitter at what she interpreted as her father’s rigidity and aloofness,” Kranish writes about how she felt upon learning of the impoverished end that left Taylor buried in an unmarked grave. “Only later, she said, did she truly understand the strains he had faced — the physical one of racing for decades, and the mental one of battling racism. The combination, she believed, had slowly killed him.”

It was perhaps fitting that Taylor’s journey ended in Chicago, that mecca of the Great Migration of Southern blacks to the urban North. His story represents an early omen of the fate which befell that generation — one that began in hopeful striving and sacrifice and ended in a bitter reckoning with the forces of racism and industrial decline. Yet before Taylor’s name disappeared from the headlines, he indirectly helped launch the next black sports superstar. As a boy, Texan Jack Johnson dreamed of becoming a cyclist like Taylor, until a bad fall caused him to settle on the “less dangerous profession” of boxing, as he later wrote. In so doing, Johnson became the first of the black athletes to dominate once virtually all-white individual sports in the 20th century.

Kranish has done historians and fans a service by reminding us that such immortals as Joe Louis, Jesse Owens, Serena Williams and Tiger Woods all followed in Major Taylor’s wake. In the lingo of bike racing, his ultimate legacy was as a pacesetter.