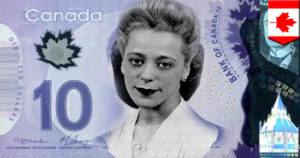 Canada — More than 70 years ago, Viola Desmond stood up for civil rights in Canada when she refused to leave a whites-only section of a theater. Last week, she was honored as the first Black person and a non-royal woman to become the face of a dollar bill in Canada.
Civil rights pioneer Viola Desmond was the one chosen out of the 26,000 submissions that came in following Bank of Canada’s announcement that they will be featuring a Canadian woman on the country’s bill for the first time.

Desmond’s story began in 1946, almost a decade before Rosa Parks refused to give up her seat on a segregated bus. Desmond, a businesswoman from Halifax selling her own line of beauty products, was on the way to Nova Scotia when her car broke down. Finding ways to kill time while stuck, she decided to watch a movie at a theater.

The local theater is a segregated area where the black people were relegated to the balcony while the floor seating was reserved for whites only. Desmond, being shortsighted, tried to buy a floor seat but was denied. So she bought a balcony seat, in which tax is one-cent cheaper, and still sat on the floor area.

She refused to leave until the police dragged and arrested her. She was thrown in jail for 12 hours and was fined for tax evasion over a single penny.

For so many years, her act of defiance and her efforts for Canada’s civil rights movement was overlooked by many. Desmond died in 1965 but she was only issued a posthumous apology and pardon by Nova Scotia in 2010, over six decades after she was arrested.
On March 9, 2018, Desmond’s 90-year-old sister Wanda Robson represented her as the new $10 bill featuring her image was unveiled. “It’s beyond what I ever thought. It’s beautiful,” Robson said at the event in Halifax.

Aside from being the first Black person to be featured on a regularly circulating Canadian bill, she is also the first non-royal, Canadian-born woman to do so. The $10 bill, which is also the first in the country to have a vertical orientation, is expected to be in circulation at the end of the year.

“I say thank you, thank you, thank you,” Robson continued. “Our family will go down in history–in history, imagine that.”
Russell Grosse, executive director of the Black Cultural Centre for Nova Scotia, said that it is a powerful act of acceptance. “The launch of the bill sends people of African descent the message that Canada is finally accepting us,” he said. “We belong.”