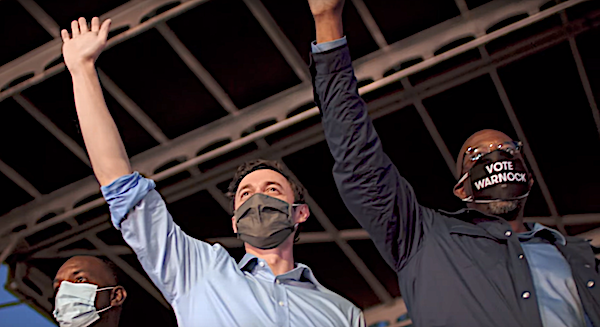 It is why President-elect Joe Biden and Vice President-elect Kamala Harris are headed to the Peach State to campaign for the Democratic candidates in their final push to win control of the Senate.

On Sunday, Harris plans to travel to Savannah to help boost the campaigns of Jon Ossoff and Rev. Raphael Warnock, the two Democratic hopefuls in the Jan. 5 Senate runoffs.

Ossoff and Warnock both are expected at a rally with Harris on Sunday.

Biden will head to Atlanta Monday, the same day that outgoing President Donald Trump plans to visit the city to stump for Republican Sens. Kelly Loeffler and David Perdue.

More than two million votes have already been cast ahead of the runoffs. If Ossoff and Warnock emerge victorious against Perdue and Loeffler, respectively, Democrats will gain control of the Senate and end the majority leadership of Kentucky Republican Mitch McConnell.

Republicans need to win just one of the two seats up for grabs to maintain control of the chamber.

Democrats have been pushing their constituency to catch up in fundraising during the remaining campaign days. They are buoyed by the fact that Biden won Georgia in the 2020 election, becoming the first Democratic presidential candidate to prevail in the state since 1992.

“Send me these two men,” Biden said of Ossoff and Warnock. “And we will control the Senate and change the lives of people in Georgia.”

For more on the original article: https://www.washingtoninformer.com/biden-to-campaign-in-georgia-for-warnock-ossoff-send-me-these-two-men/