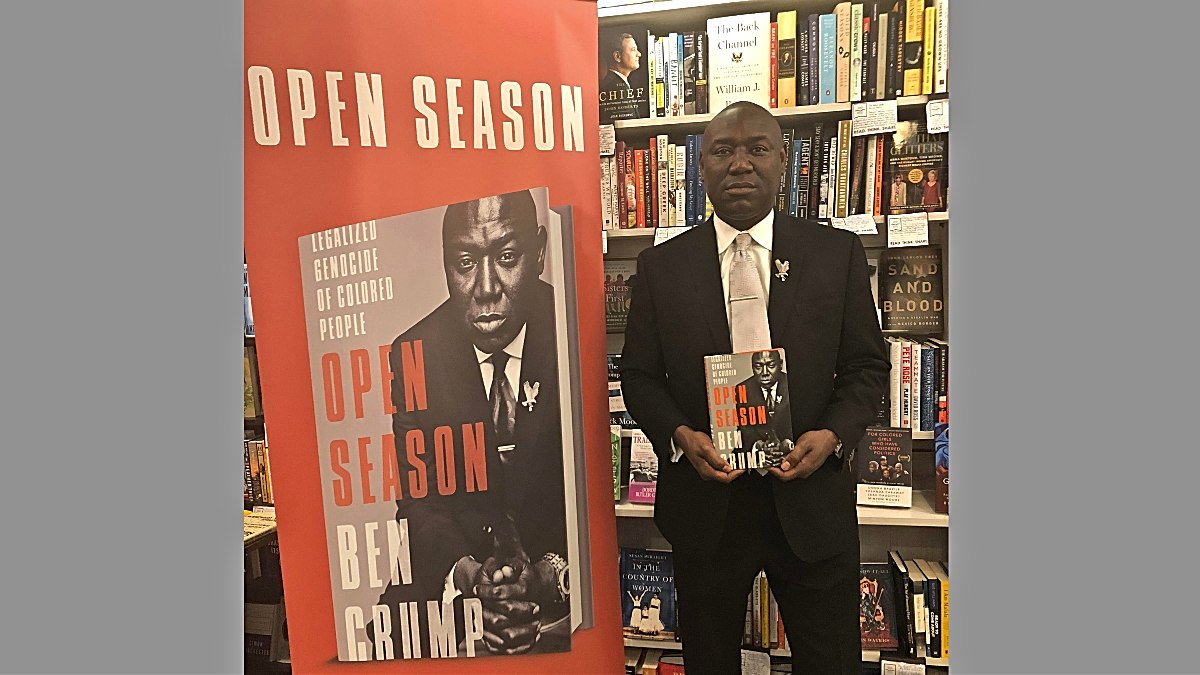 By Stacy M. Brown, NNPA Newswire Senior Correspondent
@StacyBrownMedia
NNPA NEWSWIRE — “It’s so asinine that the actions of the killer of [Treyvon Martin] their teenage son will continue to devastate them over and over again. Every year he comes up with something like the selling of the gun. It’s just horrific what this individual does. We rather focus on something more important, like in Flint, and this guy is only a distraction,” Crump noted.

“Open Season: Legalized Genocide of Colored People,” the 272-page book that’s already the top seller on Amazon.com in the category of Civil Rights Law, tackles how environmental racism pertains to the water crisis in Flint, Michigan, and Newark, New Jersey.

In the book, Crump explores how marginalized communities largely are overlooked by the institutions charged with protecting them.

Crump also summarizes the state of civil and environmental rights in the U.S.

As he prepared a return to Flint, Crump vowed to avoid distractions, including a recent $100 million lawsuit filed by George Zimmerman against the attorney and the parents of Trayvon Martin.

“The parents of Trayvon Martin and I don’t want to give any attention to this frivolous and unfounded lawsuit at all. We believe attention is what he’s seeking,” Crump stated.

“It’s so asinine that the actions of the killer of their teenage son will continue to devastate them over and over again. Every year he comes up with something like the selling of the gun. It’s just horrific what this individual does. We rather focus on something more important, like in Flint, and this guy is only a distraction,” Crump noted.

Crump’s return to Flint, where he planned to hold rallies over two days to keep attention on the continued water crisis, comes nearly four years after he and hip-hop mogul Russell Simmons went house-to-house delivering water to families throughout the city.

“We found out that not only was there a water crisis, but Flint was a food desert,” Crump stated. “So, we have to focus on this because it’s important. We have children who have problems with brain development because they were poisoned by the government wantonly.”

While Crump’s new book digs deeper into the Flint crisis, it also explores racism across the country.

In one section of “Open Season,” Crump talks about one of the incidents that inspired him to continue his work as a civil rights attorney.

“When we were in Ferguson, Missouri, in the aftermath of the killing of Michael Brown, who was shot and killed in broad daylight, there were these young Black Lives Matter activists who refused to let them sweep Michael Brown’s life under the rug,” Crump stated.

And you have these young people without fear. And this one brother specifically walked right up to the National Guard, who has their rifle trained on him. The man’s face was practically touching the tip of the rifle, but he just had enough at that moment.

“He said, with the rifle in his face, ‘go ahead and shoot me with all these cameras here, because you’re going to shoot us anyway when they go away, so shoot and kill me now so the people can see how you kill us.’

“I thought that was riveting because I said he’s right. It is important that people see how they’re killing us. But not just with bullets in the police shooting cases, but more poignant, how they kill us every day in every city, in every state, in every courtroom in America legally with these trumped-up felony convictions.”

With the book, Crump stated that he seeks to hold a mirror to the face of all Americans and force them to acknowledge the hypocrisy.

“You have to at least acknowledge the racism and discrimination in the institutions of governance. If you don’t ever admit it, we can never solve the problem,” he stated.

It took about three years for Crump to write “Open Season,” and he called it one of the most challenging tasks he’s undertaken.

“You sit there and remember all those things that have happened to black and brown people in this country, and it just breaks your heart,” Crump stated.

“Over and over again, no matter what the situation is, for people of color, we get the most injustice,” Crump stated.

“You can give me any situation, and they will find a way to make sure that marginalized people of color don’t get equal justice. “That’s what we have to fight against. That’s what we’re fighting against in Flint, Newark, Baltimore, Washington, and other communities,” he said.

“If this water crisis in Flint would have happened in a white community, it would be a national catastrophe. Lightning would strike and thunder would boom. I mean people would go to jail. “But, because it’s a majority-minority community, it’s almost as if Americans don’t know it happened. They say, ‘it doesn’t affect me, just those black and brown people, so it doesn’t matter.’”

“Open Season: Legalized Genocide of Colored People” is available at Amazon.com and other outlets.