By Dr. Kevin Williams, the Chief Medical Officer for Rare Disease at Pfizer – The “Ask Dr. Kevin” series is brought to you by Pfizer Rare Disease in collaboration with the National Newspaper Publishers Association (NNPA) to increase awareness and understanding of ATTR-CM, or transthyretin amyloid cardiomyopathy, and the risk to African Americans.

As you may already know, heart disease is a leading cause of death for all Americans, but certain minority groups face a greater risk than others. In fact, according to one study, African Americans were 45 percent more likely to die as a result of heart failure-related hospitalization compared to Caucasian populations in the United States. With the disproportionate rates of heart failure, heart attacks, and other serious heart conditions in the African American community, it’s important to fully explore the underlying cause of these conditions with the help of a cardiologist.

As the “Ask Dr. Kevin” series enters its fourth year, I want to turn my focus to a rare, but very serious form of heart disease known as ATTR-CM. ATTR-CM is a life-threatening, underdiagnosed disease associated with heart failure, but many people have never heard of it or don’t know what it is. In this article, I’m going to explain more about ATTR-CM, and answer some of the most commonly asked questions in hopes it will help raise awareness of the condition and the misunderstood symptoms that often delay diagnosis.

Who is Affected By ATTR-CM?

There are two sub-types of ATTR-CM, wild-type and hereditary. Wild-type ATTR-CM is thought to be the most common form of ATTR-CM, is mostly associated with men over the age of 60 and is not caused by a mutation in a person’s genes. Most wild-type patients are white.

Hereditary ATTR-CM is inherited from a relative and is due to genetics, affecting both men and women. In the United States, the most common genetic mutation associated with hereditary ATTR-CM is found almost exclusively in people of African or Afro-Caribbean descent. Symptom onset can occur in people as early as their 50s or 60s; however, people who have the mutation may never develop symptoms of the disease.

What Are the Symptoms of ATTR-CM? 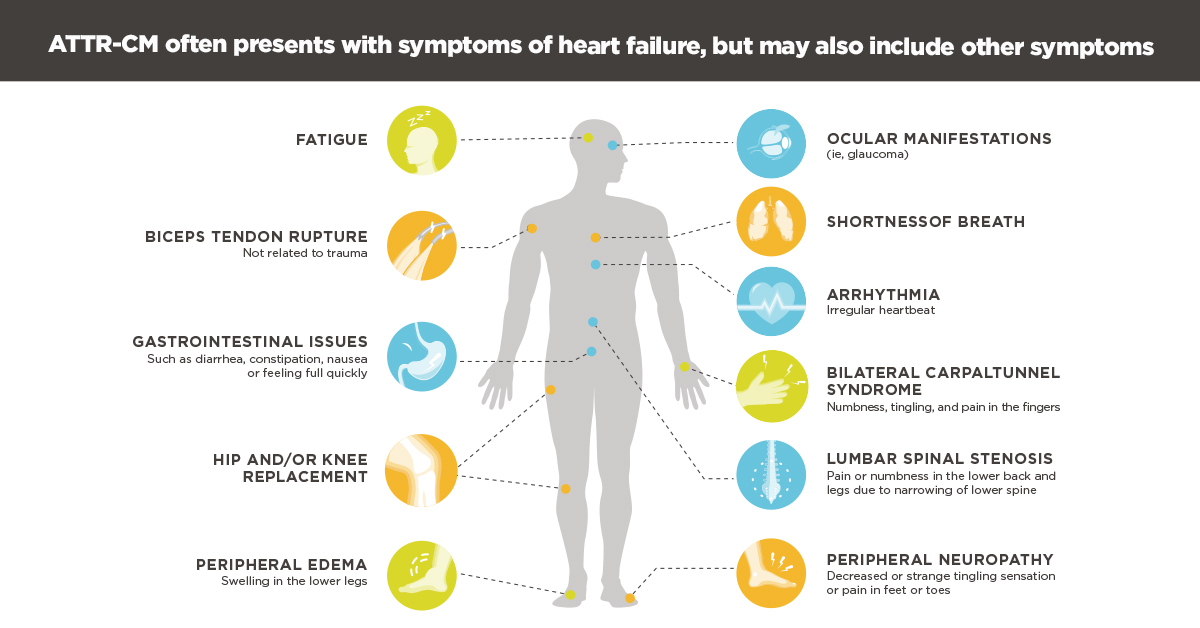 Since many patients and even some doctors are unfamiliar with ATTR-CM, the condition is highly underdiagnosed. Many people with ATTR-CM present with symptoms similar to those of more common causes of heart failure ─ such as fatigue, shortness of breath and swelling in the lower legs ─ or have symptoms that are not commonly perceived to be linked to a heart condition, like carpal tunnel syndrome (numbness, tingling, or pain in the fingers), bicep tendon rupture, gastrointestinal issues (constipation, diarrhea and nausea) and lumbar spinal stenosis (a narrowing of the open spaces in the lower spine). All of these factors can lead to delays in diagnosis or misdiagnosis.

If you’d like to learn more about hereditary ATTR-CM, including signs and symptoms, visit YourHeartsMessage.com.

*Dr. Kevin Williams is the Chief Medical Officer for Rare Disease at Pfizer. He pursued medicine after being inspired by his father’s work as a general practitioner in his hometown of Baton Rouge, Louisiana. Dr. Kevin is passionate about raising awareness and increasing understanding of ATTR-CM in the African American community. You can follow Pfizer on Facebook and Twitter.