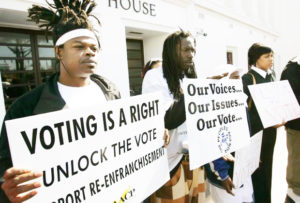 Several civil rights organizations filed a lawsuit against the state of Florida after Gov. Ron DeSantis signed a bill that would require felons to pay court-ordered financial obligations if they want their voting rights restored.

Florida’s new law, SB7066, violates the prohibition against poll taxes enshrined in the 24th Amendment, claims a lawsuit filed by the American Civil Liberties Union, the ACLU of Florida, the Brennan Center for Justice and NAACP Legal Defense and Educational Fund.

The suit, filed on behalf of 10 Floridians, also claims the law was  to some degree motivated by a racially discriminatory purpose in violation of the 14th Amendment, which granted citizenship to people born or naturalized in the United States, and the 15th Amendment that prohibits the government from denying a citizen the right to vote based on race or color or previous servitude.

“This disenfranchisement will be borne disproportionately by low-income individuals and racial minorities, due to longstanding and well-documented racial gaps in poverty and employment,” the lawsuit states.

An estimated 1.4 million Floridians with felony records had their voting rights restored in January after 64.5 percent of state residents voted last year to approve an amendment to Florida’s constitution. The ballot initiative restored voting rights to residents with felony convictions who have completed their sentences, with the exception of those convicted of murder or a sexual offense.

The state’s Republican-controlled legislature introduced a bill to curb felon voting rights in March. The bill passed both chambers.
And while court fees vary per individual, even the smallest amounts can prove difficult for the formerly incarcerated. A Harvard University researcher found that the median annual income was only about $6,500 for those newly out of prison.

“This law will disproportionately impact black Floridians with a felony conviction, who face the intersecting barriers of accessing jobs in a state with long-standing wealth and employment disparities,” said deputy director of litigation at the NAACP Legal Defense and Educational Fund Leah Alden. “Because the Florida Legislature ignored these well-understood realities, SB 7066 must be stopped.”