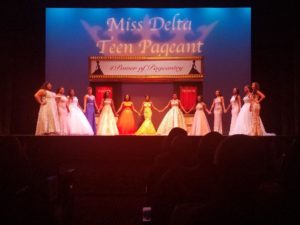 The #PowerofPageantry was on display as 13 young ladies vied for the title of the 41st Miss Delta Teen on Saturday, march 30, 2019. The biennial event, held at the Florida Theater is the signature fundraiser for the Jacksonville Alumnae Chapter of Delta Sigma Theta Sorority Incorporated.

Contestants performed to a crowd of over 1,200 supporters. The night was a culmination of six months of development of the young ladies, as co-chairs Ingrid Bethel and Michele Bell-Badger along with other members of the sorority worked vigorously on communication skills, self-reflection, workshops, master classes and many, many rehearsals to present a night of “powerful” young women.

The Jacksonville Alumnae Chapter, charted on February 9, 1946 as the Alpha Iota Sigma Chapter. The chapter is a diverse group professional women who work to support a number of local public service programs, events and projects. Delta Sigma Theta Sorority, Incorporated was founded on January 13, 1913 by twenty-two visionary and dynamic women at Howard University in Washington, D.C.