American President Joseph R. Biden has given early signs of a lenient approach towards allowing high-skilled individuals to work in the country.

But Indian information technology services companies say they will keep pursuing their localization efforts in the U.S. — their most important market.

The vacillating stance of successive U.S. administrations over granting temporary work permits — given in the form of H1B visa — is the primary factor behind the call. The non-immigrant visa allows global corporations based out of the U.S. to employ foreign workers in specialty occupations that require theoretical or technical expertise.

Global corporations, including Google, Microsoft, Facebook, Amazon, Accenture, and others, widely use this option to hire thousands of high-skilled engineers each year from India, China, and Vietnam.

Indian IT firms require a good number of human resources to execute projects in onsite locations like the U.S. The U.S administration’s caps on the number of H1B visa holders impede their ability to relocate employees. 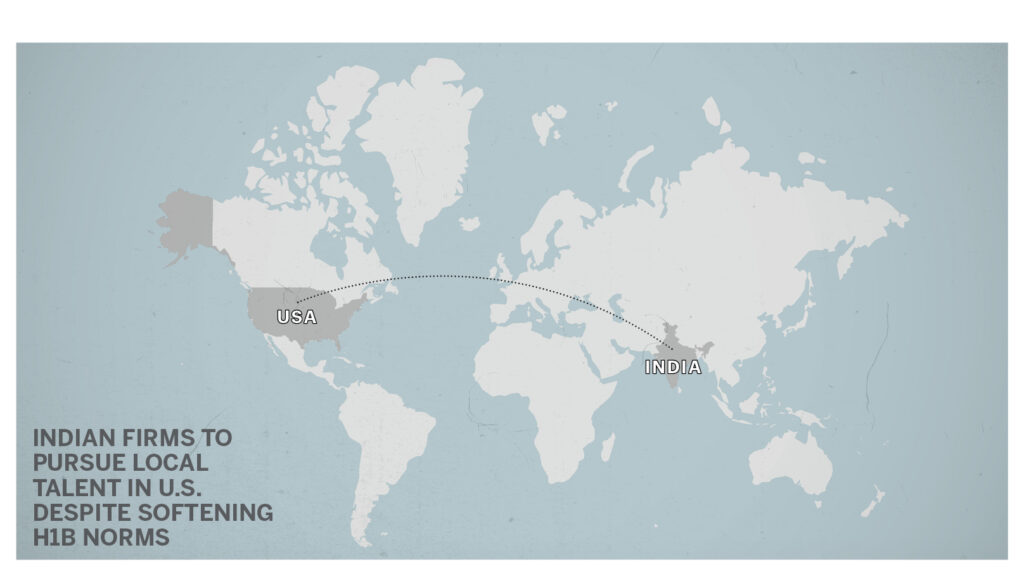 At present, 85,000 visas are issued annually by the United States Citizenship and Immigration Services (USCIS). Indian IT companies have been major beneficiaries of this visa scheme over the years.

Under former U.S. president Donald Trump, the U.S. introduced many restrictive measures, including a hike in processing fees, delayed processing, and a ban on entry to the country till March 2021 amid the COVID-19 pandemic.

The data from USCIS states that the share of Indian companies among the top 10 visa recipients dropped from 51 percent to 24 percent during the 2016-19 period. Also, the approval rates significantly dropped during the Trump era.

The Biden administration has started making some tweaks to Trump-era rules.

“Some of the onerous changes that the Trump administration made to the H1B program have either been rolled back or deferred,” Poorvi Chothani, founder and managing partner at Law Quest, an immigration law firm with offices in the U.S. and India, told Zenger News.

“That is definitely a relief but not a solution to the larger [workforce] problem.”

“So far, we haven’t seen any official proclamation, amendment, or anything of that sort to substantiate [the lenient approach],” Aditya Narayan Mishra, founder and chief executive of staffing firm CIEL HR Services, told Zenger News.

“But it [the Biden administration] is going a little softer [in its approach]. So, IT companies are hopeful they will be able to leverage the H1B visa more.”

“Especially, the mid-tier and small IT firms will get great relief if flexible H1B norms are adopted as hiring locals is a costly affair,” Mishra said.

Sensing the uncertainty in regulations, Indian IT firms are steadily building up an employee pyramid to reduce dependency on such temporary work permits.

Due to an aggressive localization drive, Infosys has become 63 percent visa independent for the U.S. market.

To ramp up the headcount, the IT firm plans to hire 12,000 more locals in the U.S. by 2022 — taking the workforce in America to 25,000. The firm has its headquarters in southern Indian state Karnataka’s capital Bengaluru.

“We are fully de-risked from the visa because of our localization strategy,” Pravin Rao, chief operating officer, Infosys, told analysts in January. “We are less dependent on any visa rule changes or any regime.”

Infosys has also launched a ‘reskill and restart’ platform, which will play a crucial role in hiring local talent. To include those without bachelor’s degrees, the company plans to hire 500 locals in the U.S. with Google Career Certificates.

World’s third-largest IT services company Tata Consultancy Services also has aggressive hiring plans in the U.S. as part of its localization drive. The firm, part of the Indian group that owns Jaguar Land Rover, is headquartered in India’s western city Mumbai.

“Tata Consultancy Services has been among the top two U.S. recruiters of IT services talent, hiring more than 21,500 employees in the past five years alone,” the software firm had said last year. “The company expects to recruit an additional 10,000 individuals in the U.S. by 2022.”

Another Indian IT services major, Wipro, headquartered in Bengaluru, has 69.5 percent of its workforce in the U.S. locally staffed, according to its 2019-20 annual report. The hiring numbers in the Americas doubled to 7,865 for Wipro in 2019-20 compared to four years back.

Similarly, HCL Technologies had 67.1 percent of its total workforce comprising locals in the U.S. The firm said it increased to 69.8 percent by March. The company is headquartered in Noida, a city in India’s northern state of Uttar Pradesh.

With the lack of adequate STEM (science, technology, engineering, mathematics) talent in this critical market from which most Indian firms draw about 60 percent of their revenues, many are also actively engaging with schools and colleges to bridge the gap.

Tata Consultancy Services, for instance, has trained more than 30,000 K-12 students since 2009 and engaged with another 1.1 million students on computational thinking as part of this initiative.

Many Indian technology firms have set up centers in neighboring countries of the U.S. falling on the same time zone, known as nearshoring in industry parlance.

Therefore, countries like Canada and Mexico have seen keen interest from Indian IT services providers in the past years.

While IT firms devise strategies to de-risk their business model from the vagaries of policy changes, the COVID-19 pandemic is seen as a silver lining.

“Definitely, offshoring [taking out work out of client country] and nearshoring will rise in the post-COVID world,” said Pareekh Jain, a technology outsourcing advisor and founder of Pareekh Consulting.

“This is because of the increased acceptance of customers to outsource work to remote locations.”

“So, the requirement of moving people to onshore [client location] is likely to come down. But this is again will be client-specific [than a generic one],” Jain said.

Some emerging technologies may also lend a hand to reduce the need for sending engineers to the U.S. for projects. Cloud computing and automation are those branches of technology that reduce human resource allocation significantly.

“Requirements of H1B visa permits may come down in the post-COVID world,” said Mishra. “This is because enterprises are becoming comfortable with new ways of working.”

The post Indian IT Firms To Hire More In US Despite Softening Stance On H1B Visa Norms appeared first on Zenger News.