DARBHANGA, India — On the hot and humid night of May 8, 2020, 15-year-old Jyoti Kumari bought a used bicycle, helped her injured father to its carrier, and began her toughest journey yet from Gurugram, on the outskirts of India’s capital Delhi, to their village in the eastern Indian state of Bihar — 1,200 kilometers (745 miles).

“My father was injured in a road accident and was bedridden,” Jyoti told Zenger News. “The money we got from our village was spent on medicine and food. We had no money left to pay room rent and the owner was threatening us. I knew if we continued staying there, we would die hungry,” she said.

Covid-19 was first identified in December 2019 in Wuhan, China. In India, the first case was detected in the southern state of Kerala. As it started spreading, India decided to impose a 14-hour voluntary public curfew on March 22, 2020. A few days later, a total lockdown for three weeks limited the movement of 1.3 billion Indians.

This hit the working-class population hard, as factories and other sites, which gave them meager salaries, shuttered. Since there was no hint of a second or third phase of such lockdown, poor migrants were counting days for the restrictions to be lifted. But after the government announced the second lockdown, they became restless and started walking, cycling hundreds of kilometers to reach their villages.

This was the biggest migrant workers’ exodus the world had seen.

“As per the data compiled by Ministry of Labour and Employment, more than 10.6 million migrant workers, including those who traveled on foot during the lockdown, returned to their home-states,” the Road and Transport Ministry said on Sept. 22, 2020. 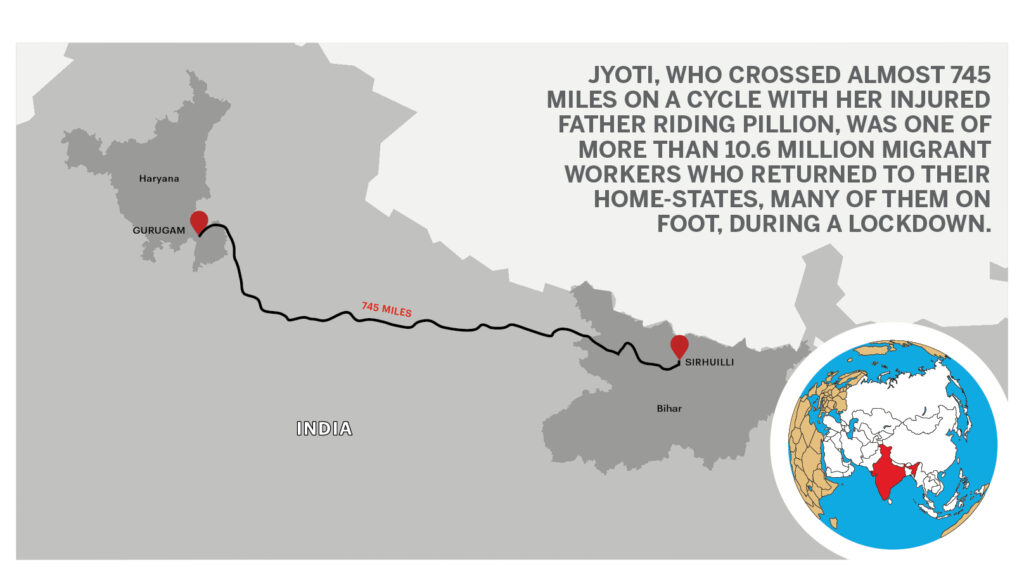 Jyoti, a resident of Sirhulli village in Bihar’s Darbhanga, was one among the 10.6 million.

On the eve of India’s Republic Day on Jan. 26, she was conferred with Pradhan Mantri Rashtriya Bal Puraskar — the highest civilian honor bestowed by the Indian government upon exceptional achievers under the age of 18.

But she didn’t fly to Delhi for the award.

As soon as the story of her journey hit headlines, she was flooded with awards, promises, and recognitions. Sports Minister Kiren Rijuju asked the Cycling Federation of India to invite her for a trial if she had the potential to be a professional cyclist. Ivanka Trump, daughter of former US president Donald Trump, praised her endurance. Visits from politicians, social organizations, and journalists became usual in a village not used to such VIP movements.

Some criticized the government.

“Her poverty and desperation are being glorified as if Jyoti cycled 1,200 kilometers for the thrill of it. The government failed her, that’s hardly something to trumpet as an achievement,” former Chief Minister of Jammu & Kashmir Omar Abdullah wrote, retweeting Ivanka’s tweet.

Paswans are one of the 20 poorest and socially isolated communities of India called mahadalits. Their population in India is around 49,45,165. Like many Dalits, Jyoti’s father Mohan Paswan does not have cultivable land except a small plot where he lives with his wife, two sons, and two daughters. Another daughter, Jyoti’s elder sister, is married and doesn’t live with them.

“Due to financial difficulties, I could not continue to pay for Jyoti’s school, and she had to quit studying in 2019,” 45-year-old Mohan told Zenger News.

“I did not like seeing Jyoti doing household chores. But she changed her destiny. After the pain she took to bring me home, the district administration enrolled her in a local government school free of charge. They helped her with books, uniform, and a bicycle that she loves to ride,” he said.

“With her examination approaching, she was busy with her studies, and I did not have the heart to ask her to stop studying to go collect the award,” he said.

Initially, Jyoti says, she loved the attention. “But after I got back to school, the frequent visitors became a problem. I was having difficulty concentrating on my studies as I was out of touch already.”

It was hard to miss two beautiful Mithila paintings — rural art from north Bihar — in the room the family was huddled together. “This is full of gifts,” Mohan said, pointing to a 6×4 feet box in the room. The family has since expanded from one to three rooms, but finishing touches are yet to be done.

Despite promises of jobs, Mohan says he has found none. “The social welfare department of Bihar had assured me a job. If I don’t get it, I will buy auto or e-rickshaw to earn a living but won’t go back to Gurugram,” he said.

On Jan. 26, 2020, he was returning after the day’s work when a car hit him. “I found myself in a hospital sometime after the accident. My left leg was badly injured. I was advised not to engage in any work for at least 6-7 months,” he said.

Crippled, he had to call his family. Jyoti and her mother Phulo Devi, who works in anganwadi center (a type of rural child care center) in the village, reached Gurugram on Jan. 31, 2020, with a loan of INR 50,000 ($686.6) to pay for the journey and the treatment.

Ten days later, Phulo had to return to work. Jyoti stayed back. They were running out of money as treatment went on for months and there was no way of earning.

In May, when the government started special trains for migrant workers, Mohan managed to get registered, but his hopes were dashed when he saw his turn would come after 600,000 others who wanted to return home.

Mohan says some of his neighbors who were from his home state had decided to leave on bicycles and asked them to join. “I had refused as I was not fit to ride a bicycle. But Jyoti had made up her mind. She made me buy a second-hand bicycle at INR 500 ($6.8),” Mohan told Zenger News.

When they finally left, they had just INR 500 ($6.8) on them. “We would spend nights near petrol pumps where many migrant workers used to assemble. Staying there was safer than in deserted stretches. A couple of times, we hitched a ride with truck drivers who could help,” said Jyoti, remembering they would eagerly wait for food from good Samaritans and businesses as spending on eateries wasn’t an option.

Phulo was ecstatic to see them after their arduous nine-day journey, but she knew villagers were reluctant to let them stay home for fear of contracting Covid-19. “I still got to spend 14 days in a quarantine center at a local school, but Jyoti spent 14 days on our tiny roof as the center had no arrangements for women,” Mohan said.

But those days are long over. She was showered with half a dozen bicycles since she said she aspired to become a national-level cyclist, but she now calls it just a “hobby”.

“I want to study as much as I can. I would be happy to participate in championship trials, but not at the cost of my studies,” she said.

Onkar Singh, secretary-general of the Cycling Federation of India, told Zenger News: “We are continuously in touch with them. We had called Jyoti for trial but due to Covid-19 restrictions, we could not do much. We will try to call her after her exams.”

Talking about her first flying experience, she said: “I was called for a music reality TV show in Mumbai, so I took my father along. I had only seen airplanes on TV screens, so I was excited.”

Now, she is a frequent flyer to Bollywood, the Mecca of the Hindi film industry in Mumbai, where two film directors have picked up a fight to tell her story.

Journalist-turned-film director Vinod Kapri signed a contract on May 27, 2020, but the project got held in a legal battle as another director-producer Shine Krishna signed a contract with Mohan after a month and transferred INR 2 lakh ($2,747) to his account.

“I told him (Krishna) about my contract with Kapri, but he said I can still sign a contract with him. I called him to cancel the contract as he had misguided me. He asked me to send him the documents in a legal manner and I did that but still he didn’t settle the issue. I was forced to lodge a first information report on Aug. 12, 2020, at the local police station against Krishna.”

Sarwar Alam, in-charge of Kamtaul police station told Zenger News, “We had served him (Krishna) notice, but he didn’t appear. The matter is in local court.”

Kapri is not willing to go ahead with the project till the legal issues are sorted he told Zenger News. But Krishna will. “Our film is not a biopic on Jyoti. We will be making a film with four stories. Jyoti is one,” Krishna told Zenger News. “We want an amicable solution that will benefit all of us. Once the court delivers its order, I will go to Bihar to sort out the issue.”

Jyoti’s fame has not only helped her parents, it has come as a boon for her younger sister (10) and two brothers (eight and six) who are now taking tuitions. “Earlier there was no money for luxury like tuitions,” Mohan said. Now that Jyoti’s exams are over, she is planning to enroll in computer classes.

The gate of their house now bears the name ‘Jyoti Kumari’ in golden, big bold font instead of the usual practice in India where the head of the family’s name, usually a male guardian, is written.

“Whatever we have today is because she had the courage that day to ride over 745 miles with me riding pillion. Without her, our family would never have made it,” Mohan said with pride.

The post The Girl On The Bicycle appeared first on Zenger News.