By MARC CAPUTO and GARY FINEOUT – Democrats say they feel pressure from Joe Biden’s campaign to refrain from door-to-door canvassing, which is hindering their efforts.

MIAMI — Republicans have closed the traditional voter registration gap with Democrats to an historically small margin in Florida, triggering a wave of Democratic apprehension in the nation’s biggest swing state. 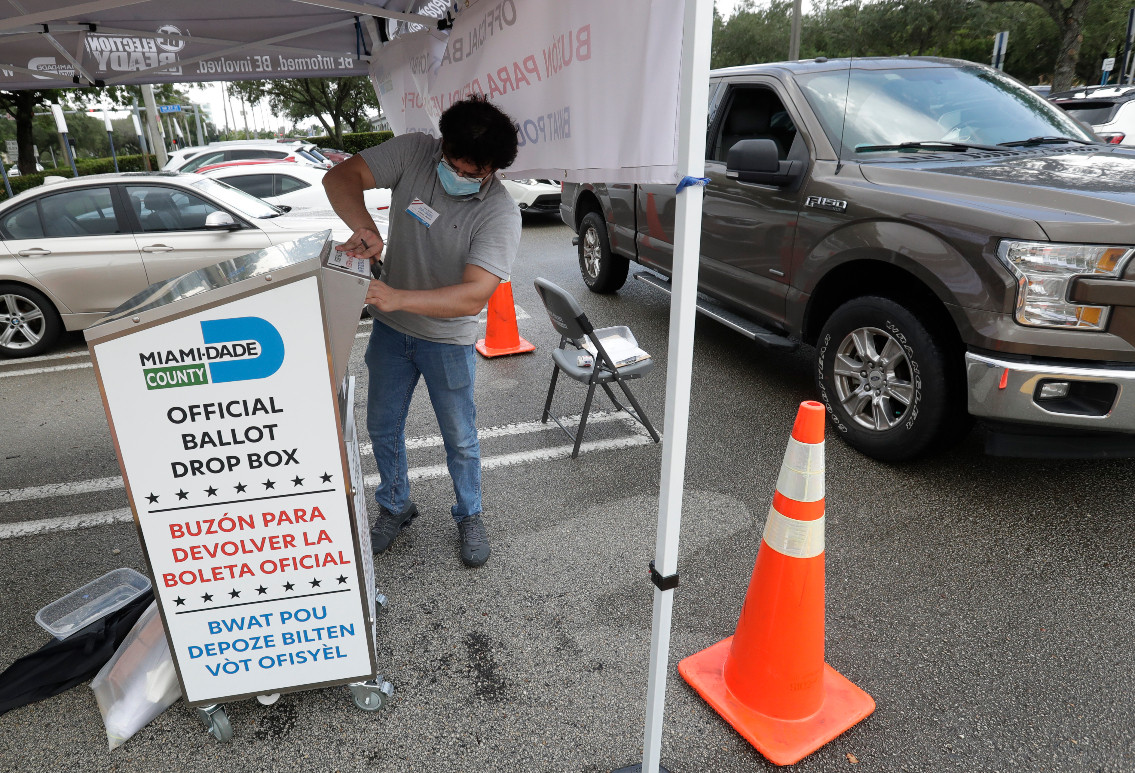 Top Florida Democrats and longtime activists have increasingly groused in private that they feel pressure from Joe Biden’s campaign to refrain from door-to-door canvassing or holding voter registration drives due to the potential spread of the coronavirus and fears of muddying his messaging on the pandemic.

In the absence of such efforts, a concerted drive by President Donald Trump’s Florida campaign to register voters has helped cut the state’s long-standing Democratic advantage to fewer than 185,000 voters, a gap of just 1.3 percentage points, according to data from the Florida Division of Elections released this week.

“It’s late in the game now,” said state Sen. Jason Pizzo, a Miami Democrat. “There’s been no pushback from us, meaning that for every 100 doors that Republicans have proverbially knocked on, it’s not like they pissed people off to the point where they’ve run to the Democratic Party because they’re pissed at the GOP. It’s shown to be effective.”

“We’ve turned our focus to voter registration in a more meaningful way than before. Everyone said you can’t do it — get the gap between Republicans and Democrats to such a small number. Well, you can do it,” Susie Wiles, the Florida campaign director for Trump, told POLITICO.

“We did it through the mail, but the main way we had success was at the doors,” she said. “And because the Democrats aren’t meeting people at their doors like our campaign is doing, we are having great success.”

In 2016, Democrats had a 327,000 voter-registration edge over Republicans, when Trump won the state by a little more than a point. Now the GOP has reduced that Democratic advantage by 44 percent. Recent polls show Florida is essentially tied between Biden and Trump.

Voter registration is a key metric in top-of-the-ticket Florida elections, which are often decided by about a point or less. The practice used to be dominated by Democrats and liberals and was a key ingredient in Barack Obama’s 2008 and 2012 wins in the state, according to his campaign advisers.

But Hillary Clinton’s campaign and Florida Democrats never sought to emulate the scope and scale of those efforts. The party lost top-of-the-ticket races for three consecutive elections, including in 2018 when Democrats, betting on a blue wave in the state, ignored warning signs it might not crest due to relatively anemic voter registration efforts.

The GOP’s registration momentum picked up with the onset of the pandemic and was fueled by the Trump’s campaign’s need to reshape the electorate in his must-win state — an imperative after a massive Democratic surge in requesting and casting mail-in ballots.

The Biden campaign denies it sent any directive concerning voter-registration drives. But at the same time, Biden has voiced support for the large racial-justice demonstrations that erupted around the country where thousands took to the streets — encouragement seemingly at odds with his campaign’s message to shelter in place and adopt other social distancing measures. The party and liberal groups did not try to register new voters at many of the events.

“Democrats sort of said two different things: no one should go out and do political activity, but it was OK to go out and demonstrate,” said a top Florida Democrat who had been involved in state voter registration drives. “A lot of this was safety and common sense, but the fact is that campaign didn’t want us to get crosswise with Biden’s message, which, don’t misunderstand me, is the right one but we may have gone a little too far.”

Democrats point out that voter registration drives like the ones conducted in the past that sign up their base voters — who tend to be young and Hispanic or Black — were impossible because they’re most successful when there are big events or crowded venues, none of which exist in the Covid-19 era. Many believe the political toll of the president’s uneven coronavirus response will prove too much for Trump to overcome.

But veteran Florida Democratic organizers like Kira Willig point out that Democrats have lost on Election Day after leading in the polls in 2016 and 2018.

“With Biden, my understanding is that with [campaign manager] Jen O’Malley Dillon, there’s a feeling that the ground game is not important. And I think that’s a miscalculation where I hope I’m wrong. Registration is part of the ground game,” said Willig, who leads the progressive group Our Revolution in Miami and volunteered for Obama, Clinton’s 2016 campaign and Andrew Gillum’s 2018 bid for governor.

Biden’s campaign declined to comment on the record, but said O’Malley Dillon did not issue a ban on voter registration efforts. The campaign at one point solicited proposals from third-party groups in some states to do canvassing on its behalf, but so far it hasn’t felt the need to move forward with the idea, according two sources familiar with the request for proposal. The Biden campaign declined comment about the proposed canvassing work.

Gillum’s downfall earlier this year also dealt a blow to Democratic registration efforts. After his loss in 2018, he announced plans to register and reenergize as many as 1 million voters through his Forward Florida political committee. But the initiative was slow to get up and running, and he then left public life after he was found earlier this year in a hotel room with an escort who overdosed.

A spokesperson for the group, Ryan Hurst, said they’re still signing up voters.

“Since Covid, we have focused on vote-by-mail enrollment and digital efforts, while Republicans continue to knock on doors, often without masks, not caring for the health and safety of our community,” Hurst said. “We have to take into consideration our outreach to traditionally underrepresented communities with how Covid has disproportionately impacted communities of color and Latino communities who are struggling right now.”

Democrats were also hoping to register hundreds of thousands of former felons, but Republicans in the legislature erected major roadblocks to prevent them from getting their voting rights back. This week, billionaire Michael Bloomberg pledged millions to help a group pay off the fines and fees owed by the felons so they could get registered to vote.

Republicans deny the charge that their campaigning practices have endangered others, although Trump has increasingly held rallies with no social distancing and no masks.

Ryan Tyson, a Republican pollster and strategist, said that an electorate with more Republicans could have an effect on polls, some of which model a far-higher Democratic voter base than exists and therefore run the risk of making Trump appear to be farther behind Biden. In an analysis, Tyson’s data analytics team found that 119,000 more Democratic voters have switched their registration to Republican or independent than Republicans Party switchers since 2016.

“When we manage to get 57,000 new registrants in a month, It’s historic. And a lot of that is just organic,” he said. “Something’s in the water and with 41 days out of the election, we find ourselves beating the Democrats at their own game.”

Independents play a crucial role in Florida elections and account for about 3.8 million of the registered voters compared with 5.2 million Democrats and slightly more than 5 million Republicans.

At the start of 2020, Florida Democrats were out-registering Republicans , which was partly a function of the state’s contested presidential primary March 17. Covid-19 hit that month and Democratic campaigns across the country began sheltering in place. And Republicans soon began picking up the pace as Democrats fell behind. For the entire year, Florida Democrats have registered only 880 more voters than Republicans.

Democrats argue they’ll be able to build on registration successes in the run-up to 2020 and already have a robust advantage in mail-in ballots.

“The reality is Democrats have amassed an overwhelming vote by mail advantage and turned out in historic numbers for the primary election in August,” said Carlie Waibel, Biden’s Florida communications director. “That momentum, coupled with our voter registration advantage this cycle, prove Democrats here are fired up and ready to make Trump a one-term president.”

For more on the original article visit: https://www.politico.com/news/2020/09/24/florida-republicans-voter-registration-surge-420936