U.S. President Joseph R. Biden, Jr. will deliver a speech at the Virtual Legislative Summit of the United States Hispanic Chamber of Commerce (USHCC), to be held this week, the organization reported on its website.

Biden will be the keynote speaker for the virtual event on Tuesday, March 30, according to the USHCC schedule. The president will deliver his speech at the conference’s opening, at 11 a.m. EST.

The organization tweeted it “is proud to announce that President @JoeBiden will be joining us at our 2021 @USHCC Virtual Legislative Summit.

Vice President Kamala Harris will also be a keynote speaker at the summit on Wednesday, March 31 at 11 a.m. EST, in the plenary called “Building Back America Through Hispanic Businesses.” 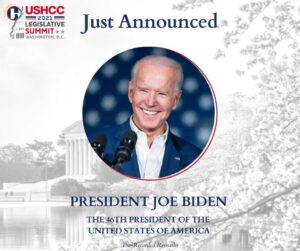 The annual event will also feature the participation of Janet Yellen, Secretary of the Department of the Treasury; Alejandro Mayorkas, Secretary of the Department of Homeland Security; Isabella Casillas Guzmán, Administrator of the Small Business Administration agency; Rep. Nydia Velázquez, Chairman of the House of Representatives Small Business Committee; and Sen. Alex Padilla (D-Cal.), among others.

“When the #Hispanic business community succeeds, the American #economy succeeds. It’s as simple as that. Let’s work together to create prosperity not only for Hispanic entrepreneurs but for the entire country. Join the #USHCC Legislative Summit on March 30-31,” the organization said on Twitter.

(Translated and edited by Gabriela Olmos. Edited by Fern Siegel)

The post President Biden To Be Keynote Speaker In U.S. Hispanic Chamber Of Commerce’s Summit  appeared first on Zenger News.