But residents of the southern metropolis of Bengaluru can see paintings by the actor in an exhibition — The Masters and The Modern, An Amalgamation of Old and New World Classics — at gallery g till March 10.

Hosted by the Sandeep & Gitanjali Maini Foundation, Khan’s art shares the walls of the gallery with works of some of India’s legendary artists such as Raja Ravi Varma, Abanindranath Tagore, Nandalal Bose, Ramkinkar Baij, and Benode Behari Mukherjee.

“Awkward embarrassed and yet delighted, honored, privileged and over the moon to display my work amongst such great artist n legends like Raja Ravi Varma, Abanindranath Tagore, and V.S. Gaitonde,” Salman Khan said in an Instagram post. 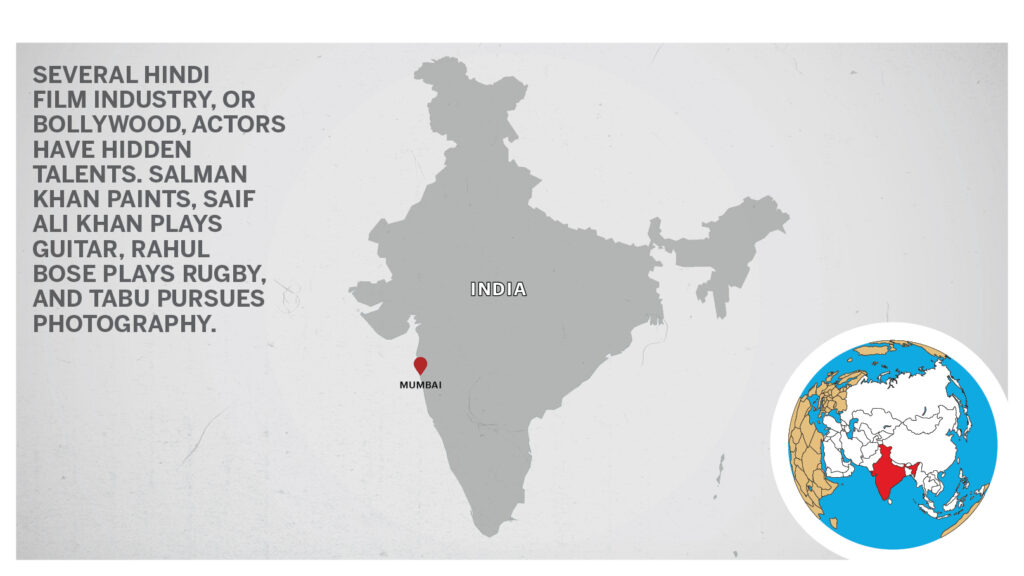 “Salman Khan’s art is the purest form of his expression,” said Archana Shenoy, the curator of the exhibition. The painting being exhibited is that of Mother Teresa and is titled “Immortal – Selfless in a Selfish World”.

Salman Khan, whose last five releases have earned INR 950 crore ($130 million), had enrolled at the Sir J J School of Art in Bombay (now Mumbai) as a young man. But after his film, “Maine Pyar Kiya” (1989) became a super hit, the world of art lost a talented recruit to the world of cinema.

The actor, however, continued to pursue his passion, taking assistance from Nilesh Vede, an artist from Sir J J School of Art.

“Over the years, we have learned from each other,” Vede told Zenger News. “His passion towards painting is just like his image — larger than life.”

In 2009, Salman Khan showcased his work for the first time, in Dubai. His collection fetched AED 350,000 ($95,000) and the entire amount was donated to his charitable organization, “Being Human”.

Salman Khan has focussed on promoting secularism through his art, painting religious figures such as the Buddha, Jesus Christ, and Hindu god Shiva.

“This was done completely by using paint from directly on the canvass,” he said. “Salman has not used a brush.”

Over the years, Salman Khan has learned to use charcoal, watercolors, oil, and acrylic.

“There are times when he uses more than one technique,” Vede added.

Salman Khan’s father and acclaimed film writer Salim Khan told Zenger News that his son had been good at painting for many years.

“But he got busy with his films,” he said. “In the last few years, he has decided to devote his time to painting.”

Salman Khan is not the only major Bollywood actor with a hidden talent. Several of his co-actors have also learned to dabble in music, photography, or poetry while balancing a busy acting career.

Saif Ali Khan, Salman’s co-actor in “Hum Saath-Saath Hain” (1999) and a leading man in his own right, is a lead guitarist of some talent. He has also toured with India’s premier rock band Parikrama and performed as the lead guitarist at many concerts.

During the lockdown, the actor decided to hone his skills.

“I had a lot of free time and that’s why I decided to practice,” the actor, who is a fan of Deep Purple and AC/DC, told Zenger News. “I want to be a better guitar player. I should have practiced much more over the years but never got the time.”

In 2012, the “Quantico” actor released her first single “In My City”, where she collaborated with famous rap artiste and Black Eyed Peas singer William James Adams, better known by his stage name will.i.am. She joined hands with Pitbull for another single, “Exotic.”

But how do the matinée stars get time to pursue their passion?

Till the early 2000s, Bollywood was notorious for actors working two-three shifts per day and signing on more than one project at a time. Over the past decade, however, many of them are choosing to do one film a year — or even once in two or three years.

“Aamir Khan (actor, director, and producer) changed the trend with his Oscar-nominated film ‘Lagaan’ (2001),” said trade analyst Amod Mehra. “It was shot for over three years. Aamir Khan does one film every two years.”

“One of the primary reasons for the trend to pick up was actors started taking a lot of time preparing for their characters,” said Mehra. “This also gave them the privilege to pursue their hobbies.”

“I am an actor by heart and a sportsman by soul,” said actor Rahul Bose, who has led the Indian rugby team in an international competition.

Bose was part of the first Indian national rugby team to play in an international event, the Asian Rugby Football Union Championship in 2008. He retired a year later but has been playing the sport at local tournaments.

Over the years, he has met with several injuries while playing rugby but that does not bother the actor.

“It’s ironical that for acting my face value is really important and for the other is all about breaking the face,” he said.

Not many are aware that Indian actor Tabu, who has worked in Hollywood films like “The Namesake” (2006) and “Life Of Pi” (2012) pursues her passion for photography in her free time.

The actor was last seen in “A Suitable Boy” (2021), the BBC series based on Vikram Seth’s eponymous novel.

But unlike Salman Khan, with whom she acted in “Jeet” (1996), Tabu doesn’t want to showcase her photographs — at least for now.

“Never say never. If I feel like, I might convert the photographs into a coffee-table book,” she said.