Nepal and China have together measured the Himalayan mountain peak of Mount Everest on their border and declared that its new height is 8,848.86 meters. The earlier height was 8,848 meters.

In an event held jointly in Nepal’s capital Kathmandu and China’s capital Beijing on December 8, the new height was announced. Mount Everest is known as Sagarmatha in Nepal and Qomolangma in China.

“It was during the state visit of the President of China to Nepal in October 2019 that both the Governments of Nepal and China had agreed on the joint announcement of the height of Mount Sagarmatha,” said a press release of Nepal’s Ministry of Foreign Affairs.

“Nepal’s technical abilities have been highlighted after the measurement of Mt. Everest,” said Nepal’s Minister of Foreign Affairs Pradip Kumar Gyawali. “There will be no more confusion about the height.”

“Many technologies have been developed since the 1950s to measure the height of mountains,” Damodar Dhakal, director of Nepal’s department of survey, told Zenger News. New Zealand’s Edmund Hillary and Nepal’s Tenzing Norgay were the first people to scale the peak in 1953.

“Various countries have measured the height of Mt Everest using their own methods,” he added.

In 2005, China measured it using the Gelfand-Naimark-Segal method, finding it to be 8,844.43 meters — but Nepal did not accept it. Nepal had planned to measure the height in 2000, but the government had not allocated a budget then.

After the major earthquake in 2015, the country began to consider measuring Everest again. When Chinese President Xi Jinping visited Nepal in October 2019, both countries decided to announce the new height together.

“But Nepal had already begun the work,” said Dhakal. “By the time of President Xi visit, 90 percent of the work was completed. China began its measurements only last year.”

Nepal’s Department of Survey had organized a seminar in 2017, which was attended by experts from India, Bangladesh, China, the US and other countries.

“The field survey began around the same time, after taking into account the various suggestions of experts,” Buddhi Narayan Shrestha, former director-general of the Department of Survey, told Zenger News.

The Nepalese government spent about 130 million Nepalese rupees ($1.1 million) on the project. Some equipment was provided free of cost by international organizations such as National Geographic.

“The new height will not affect climbing of the peak by mountaineers,” said Dhakal. He added that there was no evident reason as to how the height of the peak had increased.

“The data processing was done jointly with China,” said Tek Narayan Pandey, secretary at the Ministry of Land Management, Cooperatives and Poverty Alleviation, at the ceremony to announce the height. “It has promoted the friendship between Nepal and China.”

Others, however, felt that it would have been better to include more global participants in the project.

“Nepal should have involved as many countries as possible, including India and the US, in height-announcement ceremony,” said Shrestha.

In recent years Nepal has emerged as a key site for geopolitical competition between China and India, which have clashed several times across their Himalayan borders.

The Nepal Communist Party government of Prime Minister K. P. Sharma Oli in Kathmandu is close to China. On May 20, it released a new political and administrative map including the disputed areas of Kalapani-Limpiyadhura, which was not previously included in Nepal. The Indian government has rejected the map and registered a strong protest. 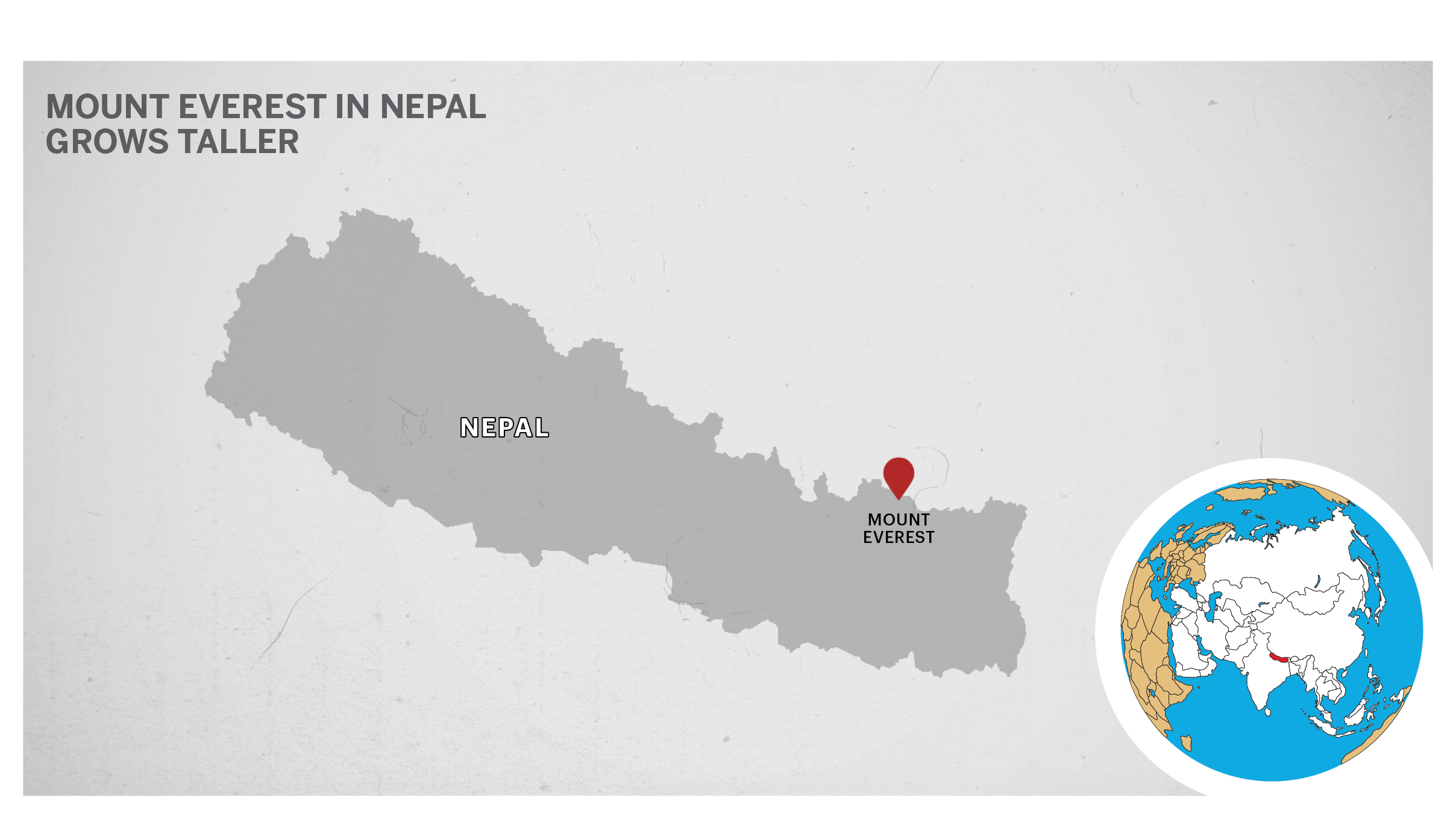 India has old diplomatic, cultural and economic ties with Nepal, with many men from the Gurkha community still serving in the Indian army, and it is reluctant to cede its sphere of influence easily.

Soon after Shringla’s departure, Chinese Minister of National Defense, Wei Fenghe, arrived in Kathmandu on Nov. 29 for a daylong visit.

“Not only the north and the south, but also the west is showing an interest in Nepalese politics,” said Dr. Madan Kumar Bhattarai, a former foreign secretary of Nepal. “Their eyes are on the Himalayan region, where they seem to be interested in water.”

It is not only these visits that have made Kathmandu a happening place. Internal politics of the Communist party has kept Oli’s government, which was elected to power in 2017, on its toes. There have been two Cabinet reshuffles already.

And, in the midst of all these, thousands of Nepalese took to the streets on Dec. 5, seeking reinstatement of the monarchy. Nepal’s last king, Gyanendra Shah, had abdicated in 2008 after the Constituent Assembly abolished a 240-year-old monarchy at the end of a decade-long civil war between the king’s government and Maoist insurgents.