VRINDAVAN, India — Basant Utsav, or the festival of spring, is celebrated with great pomp and show by Indians, especially the people belonging to what the locals refer to as the “land of Braj” or the land of Hindu deity Krishna.

This sacred landscape finds its center at Mathura, the juncture of the three northern states of modern-day Uttar Pradesh, Rajasthan, and Haryana.

Brijwasis, or the residents of the land of Braj, asked us to experience what they believe to be a one-of-a-kind insight into the ways of their land — the Lathmar Holi, which literally translates to a festival of sticks and colors. 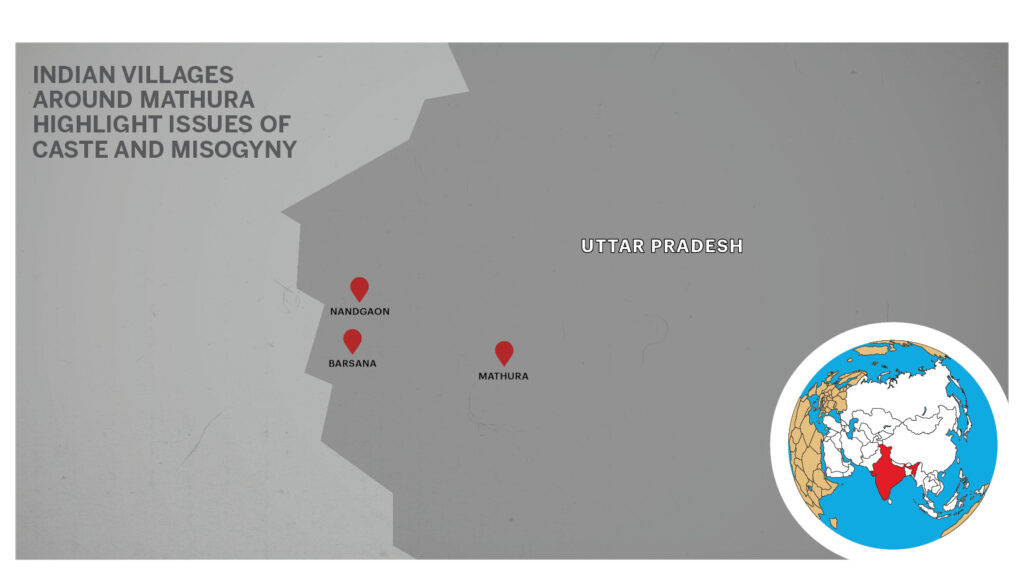 Taking their word for it and eager to learn about this display of what seemed to be essential to their identity, we reached the twin villages of Barsana and Nandgaon, an hour’s ride away from Vrindavan, a pilgrimage hub in Uttar Pradesh.

Hoards of devotees were found climbing out of Tata Sumos, which shuttled back and forth ferrying passengers to the Shri Radha Rani Temple of Barsana — believed to be the only temple dedicated solely to Hindu deity Radha in the subcontinent.

Some even climbed out of tour buses, few bare feet while chanting “Radhe, Radhe,” accompanied by adrenaline-pumping slogans like “Nandgaon ka chora hai, Barsana ki chori hai (From Nandgaon is the boy, from Barsana is the girl).”

On digging deeper, we find out about the story behind these chants.

Lord Krishna used to travel all the way from Nandgaon (believed to be his birthplace) with his fellow cowherd brethren (belonging to the Yadava clan if you sit down to trace origins) to Barsana to play Holi with his beloved Radha, who was of Gosain origin, and her friends.

To prevent this teasing and flirting, or in other words, to prevent this “taking away the honor of the girls,” the married folk of the Gosain families of Barsana stood outside their homes with laths (wooden sticks) heavier than themselves, shooing away the boys of Nandgaon.

This is still practiced in the villages.

The ghoonghat (veil)-covered faces of the Barsana women is quite an intimidating sight, but that doesn’t deter the boys of Nandgaon from enacting age-old folk songs that Lord Krishna would apparently recite urging the women to lift their veils so that he could rub color on their cheeks.

What begins as an endearing display of femineity soon turns into the women trying to beat the escaping participating youth — most oblivious to the history of the ritual. The old, who still remember this festival’s history, kept shouting the beginnings of verses reminding the young intermittently, leading the way in bits.

One among them was 70-year-old Alka Goswami, who is revered by the fellow elderly of the village. She tells us how there were only three remaining Gosain families in Barsana who took part in this festival.

“The lath is handed down to only daughters-in-law and not daughters,” she tells Zenger News while looking at her daughter-in-law, who is getting ready for the festival and clad in red and gold from top to bottom.

“My days of the lath are over. Now it is up to the young to carry it forward,” Alka says.

“We have to urge our sons to take care of the duties of the temple and remind them that they are Gosains and meant to work as priests.”

While this experience reeked of patrilineal practices intrinsic to the northern regions of India, we also witness a splash of endogamy.

Rana Goswami, a 42-year-old shopkeeper who feeds hot parathas (fried flatbread) and chilled cups of lassi (curd-based drink) with dollops of malai (clotted cream) to devotees every year, introduces us to his family in his place of residence by an open dhaba (roadside restaurant).

Rana tells us how the boy and girls of Nandgaon and Barsana are forbidden to ever get married.

“An intermingling like this on the occasion of Lathmar Holi is only possible once in a year,” he informs. “It is because Radha and Krishna are believed to be the same being.”

“The womenfolk of Barsana will now go to Nandgaon with their laths and play another round of Lathmar Holi.”

We grasp the feelings of “how dare you?” in the sentiments of Rana when defending the motivations of the women with laths. What is masked in playfulness opens out to us as a case of revenge or taking back the honor of the village — which, in India, is almost always a female-linked commodity.

Honor killings have been mostly reported in northern regions of India, mainly due to girls trying to move outside their caste or religion. “Uttar Pradesh has earned the dubious distinction of reporting the highest number of honor killings and love-affair-related murder cases,” this report states.

The journey of dark-skinned Lord Krishna from a cowherd Yadava clan member to being a God was quite a progression. And hence, makes him a beloved character in the land of Braj, which is otherwise unkind to ones on the unfortunate end of the fence (caste system).

Crimes against members of marginalized communities increased in 2019, according to the latest data by India’s National Crime Record Bureau.

“Despite its constitutional abolition in 1950, the practice of ‘untouchability’ — the imposition of social disabilities on persons by reason of birth into a particular caste — remains very much a part of rural India,” a Human Rights Watch report states.

This is further highlighted when those we met introduced themselves by placing great emphasis on their surnames.

Rana even informed us of members of the only few privileged Gosain families getting sole access to the sanctum-sanctorum of the Shri Radha Rani Temple.

Yash Goswami, a 19-year-old boy, or should we say priest of the Gosain family of Nandgaon, is the “youngest and the most spoilt of the five brothers,” Rana says with pride.

Though the festival may look like one of fun and frolic as well as a show of feminist power from the set of pictures thrown up in Google searches, we found angles of entrenched caste and misogyny when we zoomed in.

Yash, who is completing his final year in Bachelor of Commerce from Sri Rati Ram Mahavidyalaya in Mathura, doesn’t want to be a priest who is mandated to perform 18 duties/rituals every year.

“I hate the way they treat women during this festival,” Yash tells Zenger News. “My friend’s mother from Barsana injured herself last year.”

“It is said by the locals here in Nandgaon that the more you spend, the more Lord Krishna gives back,” Yash says. “So, I ask them (his family) for INR 500,000 ($6,800) per year to sustain my three friends and me back in Barsana.

“We’ve taken up a rented place there and order food from hotels. I am here in Nandgaon during this festival only because he (elder brother) asked me to be present, if only for these few days, as it was mandatory.”

“I know it’s not allowed for boys and girls of the two villages to intermingle, but I find Barsana better. It’s quieter.”

The post Lathmar Holi: Zooming In On The Angles Of Caste And Misogyny In India’s Twin Villages appeared first on Zenger News.