MUMBAI, India — Amid the resurgence of Covid-19 cases in some states of India, the stage was being set in New Delhi on Feb. 19 to announce the launch of a miracle drug that seeks to cure the disease.

Ramdev, the celebrity yoga guru who controls Patanjali Ayurved that sells the drug, came on the stage and announced the “first evidence-based medicine for Covid-19” named Coronil. He was flanked by the country’s Health Minister Harsh Vardhan and Transport Minister Nitin Gadkari.

A huge poster behind the stage indicated the drug is CoPP-World Health Organization’s Good Manufacturing Practices certified. It also had rhyming claims saying “corona ki dawai, Patanjali ne banai (corona medicine has been manufactured by Patanjali)”. Another claim translated to “Patanjali’s research is a boon to 158 countries in the world.”

In 10 years, the fast-moving consumer goods company that began in 2006 has recorded a turnover of close to $1 billion. It wanted to reach $3 billion by 2020. There is almost nothing the firm doesn’t sell, starting from medicines and grocery items to dhotis and ripped jeans, among other apparel and accessories.

The presence of two senior ministers at the launch of the drug — which has come under scrutiny after the WHO issued a clarification saying it had “not reviewed or certified the effectiveness of any traditional medicine for the treatment” — led to a raging controversy. 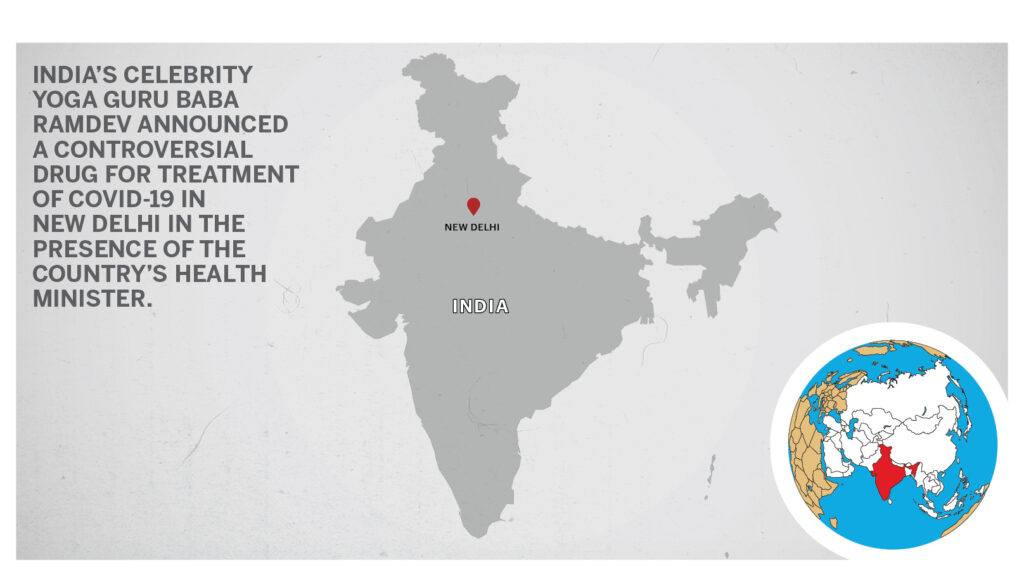 The Indian Medical Association issued a letter questioning the evidence behind the medicine.

“We are in the middle of a pandemic and caution is extremely important when we talk about its treatment,” said J.A. Jayalal, national president of the Indian Medical Association. “The presence of two cabinet ministers including the health minister at a private company’s product event is a big ethical issue.”

At the event, Ramdev advised people to take Coronil to build their immunity before getting the vaccine, while still waiting to get the vaccine, while they have contracted the disease, or even after getting the disease. He presented the findings of a scientific study, of which Patanjali Ayurved’s managing director Acharya Balakrishna is one of the authors, and said several other research papers were in the pipeline.

“How can a drug be effective for ‘prevention, treatment, and rehabilitation from a disease? And, if Coronil is effective, why is the government spending so much on vaccination?” Jayalal said.

The government has remained silent on the issue. Health Minister Vardhan has also refrained from commenting.

The drug had come under criticism in June 2020, too, after the firm started marketing it as a cure for Covid-19. Some states banned its sales and the Ministry of AYUSH (traditional medicine) asked the firm to stop making such claims. The very next month, the firm said it had got permission from the ministry to market the drug as an “immunity booster”.

Experts in the field have raised questions about the study on which Ramdev has based his claims. The study, published in a little-known journal Phytomedicine, concludes that the Ayurveda-based treatment can help in “faster recovery” and also reduce the risk of “viral dissemination”.

“Reduced inflammation markers suggested less severity of Covid-19 infection in the treatment group. Moreover, there was no adverse effect observed to be associated with this treatment,” the research paper based on a sample size of 100 patients stated.

“Patients who were a part of the study were asymptomatic,” said Jayalal. “What are you curing when there are no symptoms?”

The study pointed to another pre-clinical research done on the “humanized zebrafish model” that showed that a herbal concoction combined into a single formulation called Coronil “moderated the SARS-CoV-2 spike (S) protein induced Covid-19 symptoms.” “Zebrafish has been a reliable model system for studying human viral pathologies,” that research states.

Dharamveer Tatwavedi, an oncology clinician and DPhil student at the University of Oxford, told Zenger News the study is riddled with inadequacies.

“The authors need to be asked for clarifications regarding their methodology and if the answers are unsatisfactory, the study needs to be retracted. This cannot and should not be used as the basis of the approval of this drug,” Tatwavedi said.

“Pilots are often used to streamline study protocol, rather than to show true benefit/efficacy of treatment. Side-effects can also often be missed with such a small sample size,” he said.

Highlighting other flaws in the study, he said just four people in the cohort of 100 were above 55 years and the number of women was only 18, limiting the generalizability of the study.

The Indian Medical Association is conducting inquiries into the permissions given to the drug and the protocols that were followed.

But not everyone is convinced about the debate. V Tembhurnikar, an Ayurveda practitioner and president of the National Integrated Medical Association, said Patanjali has opened the doors for Ayurveda in many foreign countries.

“Ayurveda has many immunity-boosting wonder drugs that have been used from ancient times,” said Tembhurnikar. “I have not seen the research on Coronil. But if a health minister was at the event, he must have done his study.”

Zenger News reached out to Ramdev’s spokesperson S.K. Tijarawala as well as Patanjali managing director but did not get a response.

Balakrishna, who holds about 98.5 percent stake in Patanjali Ayurved, did tweet after concerns over the certification were raised.

“We want to clarify to avoid confusion that our WHO GMP compliant COPP certificate to Coronil is issued by Drugs Controller General of India, the Government of India. It is clear that WHO does not approve or disapprove any drugs. WHO works for building a better, healthier future for people all over the world,” he said in the tweet.

But within a few days, people started putting out tweets against the firm and called for the arrest of Ramdev.

Controversies are not new for the Patanjali brand. When it began in 2006, the National Aids Control Organization had to put out a statement denouncing any claim of curing AIDS by practicing yoga. Ramdev had hit back saying he never claimed AIDS can be cured through yoga.

In 2015, Patanjali launched an instant noodles brand without approval from the Food Safety and Standards Authority of India. In 2018, Ramdev created another flutter with the launch of ripped jeans.

When the government lifted restrictions on online sales after a phase of total lockdown to stop the spread of Covid-19, Patanjali quickly launched its own e-commerce platform.

“The process of Patanjali has been to act fast, act quickly and build mileage to get attention,” said Harish Bijoor, a brand and business strategy specialist based in Bengaluru.

“This process has made the company diversify rapidly.” Bijoor believes that the negative controversies are not healthy for the brand in the long run.