PUNE, India — As the world dabbles between a fresh surge of Covid-19 cases and rapid immunization, pharmaceutical companies are now testing non-invasive forms of the vaccine.

The idea is straightforward — easy administration of the vaccine, temperature stability, more extensive distribution, and no stinging pain of intravenous injections.

The candidate has shown efficacy in pigs after a single dose.

“An oral Covid-19 vaccine would eliminate several barriers to rapid, wide-scale distribution, potentially enabling people to take the vaccine themselves at home,” Nadav Kidron, chief executive officer of Oramed, said in a statement.

India, which began one of the world’s biggest vaccination drives in January, faces an uphill task to immunize its entire population of 1.3 billion. The biggest issue is the massive cold-chain requirements to pull off the task and the other issue is making sure the vaccines reach the right place. Oral and intranasal vaccines will solve these issues. 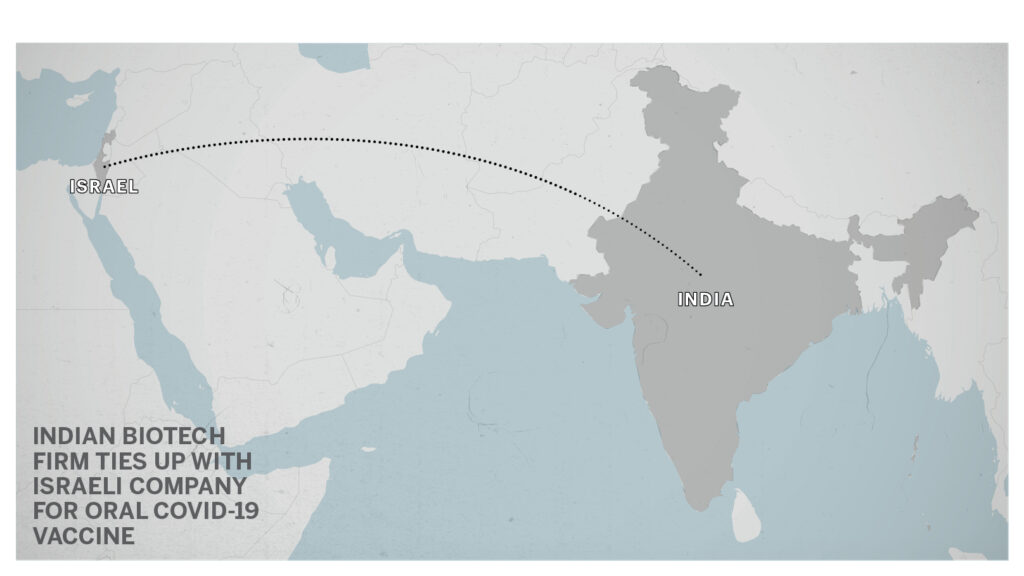 “While the ease of administration is critical today to accelerate inoculation rates, an oral vaccine could become more valuable in case a Covid-19 vaccine is recommended annually like the standard flu shot,” the statement notes.

Bharat Biotech, another Indian vaccine maker that created the Covaxin, is also working on an intranasal vaccine with the University of Wisconsin. The non-invasive vaccine is undergoing clinical trials.

Though the development of an oral vaccine is a welcome step in the global immunization process, its efficacy is yet to be tested for a potent virus like the Covid-19.

A single dose from Oravax Medical Inc — the joint venture by Premas and Oramed — has been effective in a pilot study on pigs.

The study suggested that the oral Covid-19 vaccine promoted both systemic immunity through Immunoglobulin G, the most common antibody in blood and bodily fluids that protects against viral infections, and Immunoglobulin A, which defends the respiratory and gastrointestinal tracts against infection.

“As the world moved from development to approvals of the vaccines to combat the pandemic, logistics, medical supplies, and cold-chain maintenance, Premas and Oramed initiated discussions to bring about a game-changer combination platform,” said Prabuddha Kundu, co-founder and managing director of Premas Biotech.

Kundu said the study would be released at the beginning of the second quarter of 2021.

“The oral vaccination works more effectively in mucosal surfaces (saliva, tears, nasal, gastric, cervical, and bronchial mucus),” Yashpal Singh Malik, secretary-general of the Indian Virological Society, told Zenger News. “But it is not completely true because, in the case of Polio, there is oral vaccination. It gives systematic protection.”

According to India’s National Health Portal, since 1988, there is a 99.9 percent reduction in polio cases. Now, the African region is also free of poliovirus. Only two countries (Afghanistan and Pakistan) continue to report polio cases.

The concept of edible vaccine came into being through the use of bananas.

Since many animals in the wild have Rabies, Malik said that scientists thought of putting a similar oral dose in a bait for the animals. “But due to some concern, the study did not work out. Now, five shots are injected for the disease,” Malik said.

The challenge with making an oral vaccine is that the gastric juices rapidly degrade any protective layers enclosing the antigen, making them useless.

But Oravax says the firm has solved that problem through technology. The firm said it would elaborate on the technology “once efficacy on humans is proven”.

“Oral vaccination is about a pill, which makes the delivery fairly easy,” said Kundu to Zenger News. “The primary concept is ease, temperature stability, and a different modality. Not all vaccines can be successful via oral delivery, and hence may need syringe vaccination.”

Pfizer — the company behind America’s first coronavirus vaccine — is also working on its oral treatment against Covid-19.

“Tackling the Covid-19 pandemic requires both preventions via vaccine and targeted treatment for those who contract the virus,” said Mikael Dolsten, chief scientific officer and president, Worldwide Research, Development and Medical, in a statement.

“Given the way that SARS-CoV-2 is mutating and the continued global impact of Covid-19, it will be critical to have access to therapeutic options now and beyond the pandemic.”

Pfizer has designed an oral vaccine (PF-07321332) as a potential therapy that could be prescribed at the first sign of infection, without requiring patients to be hospitalized or in critical care.

The Phase-1 trial is a randomized, double-blind, sponsor-open, placebo-controlled, single- and multiple-dose escalation study in healthy adults evaluating the safety, tolerability, and pharmacokinetics (the movement of drug into, through, and out of the body) of the new candidate.

Kundu says there is a proven concept of oral vaccinations of how it works. The primary idea of switching from injections to oral doses was due to the pain a child suffers during and after the vaccination.