Kolkata — India loses $10.1 billion to corporate tax abuse annually, one of the highest amounts among Asian countries, according to a new report.

China loses about $3 billion annually, or 818 percent of the share of tax lost globally to corporate tax abuse. India’s global share is not calculated in the report.

The State of Tax Justice 2020: Tax Justice in the Time of Covid-19 reports that the world is losing over $427 billion in tax a year to international tax abuse.

“Of the $427 billion, nearly $245 billion is lost to multinational corporations shifting profit into tax havens in order to underreport how much profit they actually made in the countries where they do business and consequently pay less tax than they should. The remaining $182 billion is lost to wealthy individuals hiding undeclared assets and incomes offshore, beyond the reach of the law,” the report states.

The report draws its analysis of corporate tax abuse from the aggregated country by country reporting data published by the OECD (Organization for Economic Cooperation and Development) for 2016 and 2017.

“The State of Tax Justice reports that OECD countries are responsible for 59 percent of the $182 billion the world loses to private offshore tax evasion every year — just over $106 billion a year.”  India is not a member of the OECD, but it has a working relationship with the organization. 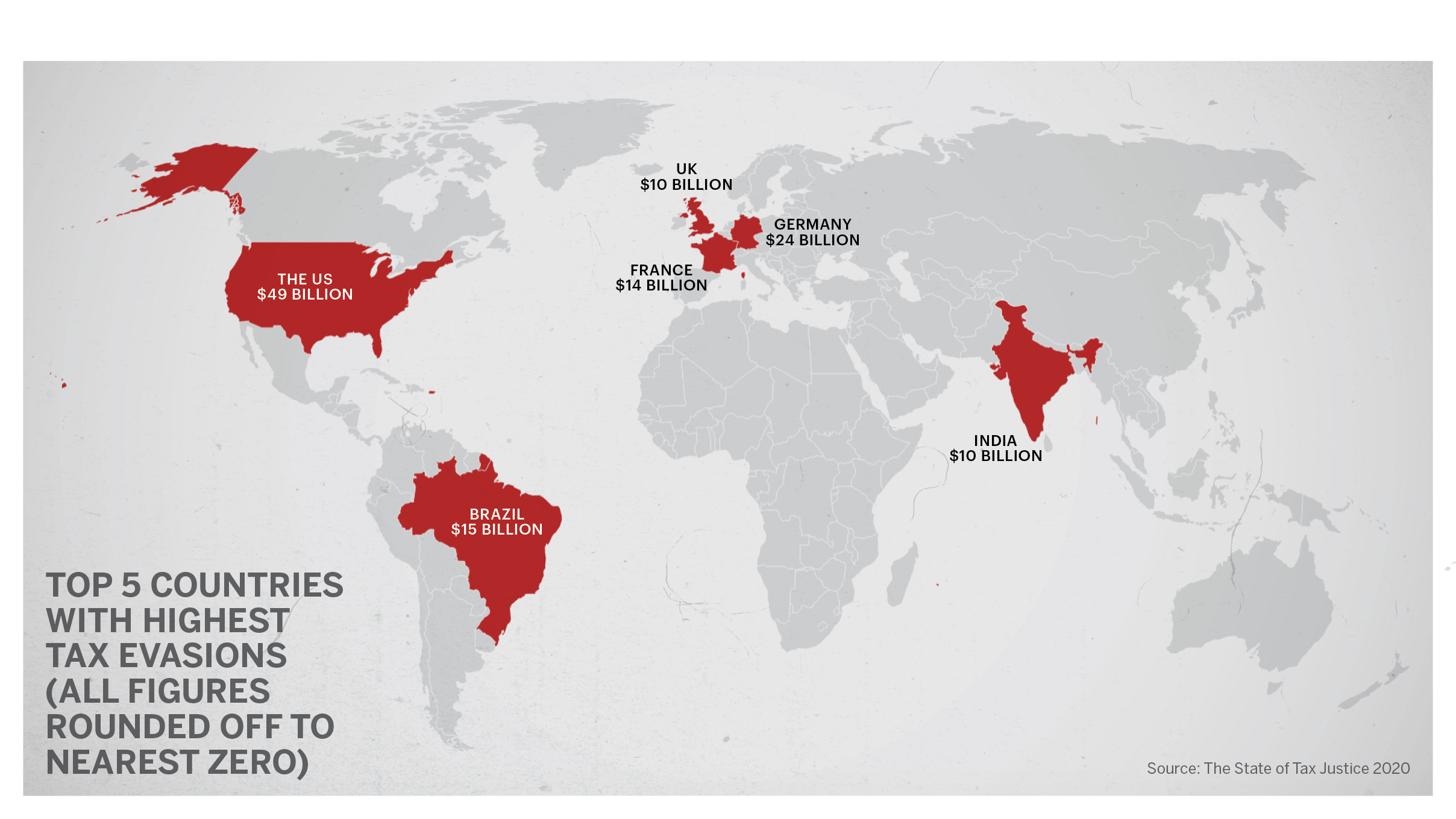 Much of the corporate tax evasion in India is due to foreign remittances to Mauritius, Singapore and the Netherlands.

India, along with some 80 other countries, has signed on to the Double Taxation Avoidance Agreement to prevent an entity from being taxed twice in cross-border deals.  Under the agreement, firms registered in Mauritius or Singapore that have invested in India are not required to pay taxes on dividends earned or capital gains in India.

While companies in India get tax breaks under the treaty, companies registered in Mauritius and Singapore pay far less tax.

Since 2017, however, companies registered in nations with which India has signed DTAA, were required to pay 50 percent of the domestic tax rate until2019. Thereafter they are required to pay the same tax rate as Indian companies.  The average corporate tax rate in India is around 30 percent, among the highest in the world, according to KPMG.

In recent years, India has made many changes to its tax laws, making tax evasion more difficult.

In 2019, the government reduced corporate tax on manufacturing companies from 30 percent to 20 percent, and to 15 percent for new companies. For foreign companies, tax rates continue to be greater than 40 percent.

“The approach of the government has been to maximize tax collections by going after the multinational corporations,” said Vishal Malhotra, tax leader for telecomms practice at EY India. “Now we also have general anti-avoidance rules and an equalization levy in place. The government is even more stringent in targeting people who are supplying goods in India without having a presence here.”

This year the government introduced a new tax levy of 2 percent on the sale of goods by foreign e-commerce operators that do not have a presence in India.

“It is not easy to quantify the amount of tax evasion,” said Narayan Jain, chairperson of the representation committee of the Direct Tax Professionals Association.  “Now, the income tax laws in India are very strict. Under the present laws, no unaccounted cash transactions can be done. Earlier, tax evasion was rampant as tax rates were very high, as much as 97.75 percent in the decade of ’70s.”

“Our tax to GDP ratio of around 10 percent is one of the lowest in the world,” said Nand Gopal Khaitan, senior partner at law firm Khaitan & Co. “Our ranking in corruption is 77 out of 191 countries. In fact, in my view, India loses much more than $10.3 billion in [overall corporate and personal income] tax. According to me, the main culprit for it is complex and irrational tax law in India.”

Only a fraction of India’s 1.5-billion population pays income tax, and personal income tax is exempted up to an annual income of Rs 2.5 lakh (nearly $3,369).