Tamil Nadu — While a number of global investors are striking deals with distressed firms in India, major obstacles, including legal and regulatory issues, delays, and lack of information, have caused many of the purchases to fall through.

Several large international firms, including KKR, Apollo Global Management, Oaktree Capital Management, and Liberty House Group, have bid for distressed firms in India since the country introduced its Insolvency and Bankruptcy Code in 2016, but not many deals have succeeded.  The IBC itself has faced several roadblocks, prompting lawmakers to weigh a number of amendments aimed at faster resolution of cases.

“The stressed asset market in India is still approximately USD 150+ billion, indicating significant potential for investments, either through IBC [Insolvency and Bankruptcy Code] or mechanisms outside IBC,” states a 2019 report by Alvarez and Marsal, a New York-based firm that specializes in performance improvement.

“While there exists tremendous investment opportunity under the IBC regime, participation of stressed asset investors under IBC has been tepid so far.”

The report lists the major issues faced by stressed asset investors under IBC as: delays in approval of resolution plan “due to insufficient NCLT [National Company Law Tribunal] bandwidth” and delays due to litigation, among other things.

Among the unsuccessful bids was UK-based Liberty House’s resolution plan for ABG Shipyard. It was rejected twice by lenders to the debt-ridden company in 2018. Liberty House had offered to pay lenders INR 5,000 crore ($674 million) over 10 years. The company’s debt was INR 18,000 crore ($2.4 billion).  Though Liberty House was the sole bidder, the lenders initiated liquidation proceedings under the IBC. In April 2019, the NCLT ordered the company’s liquidation. 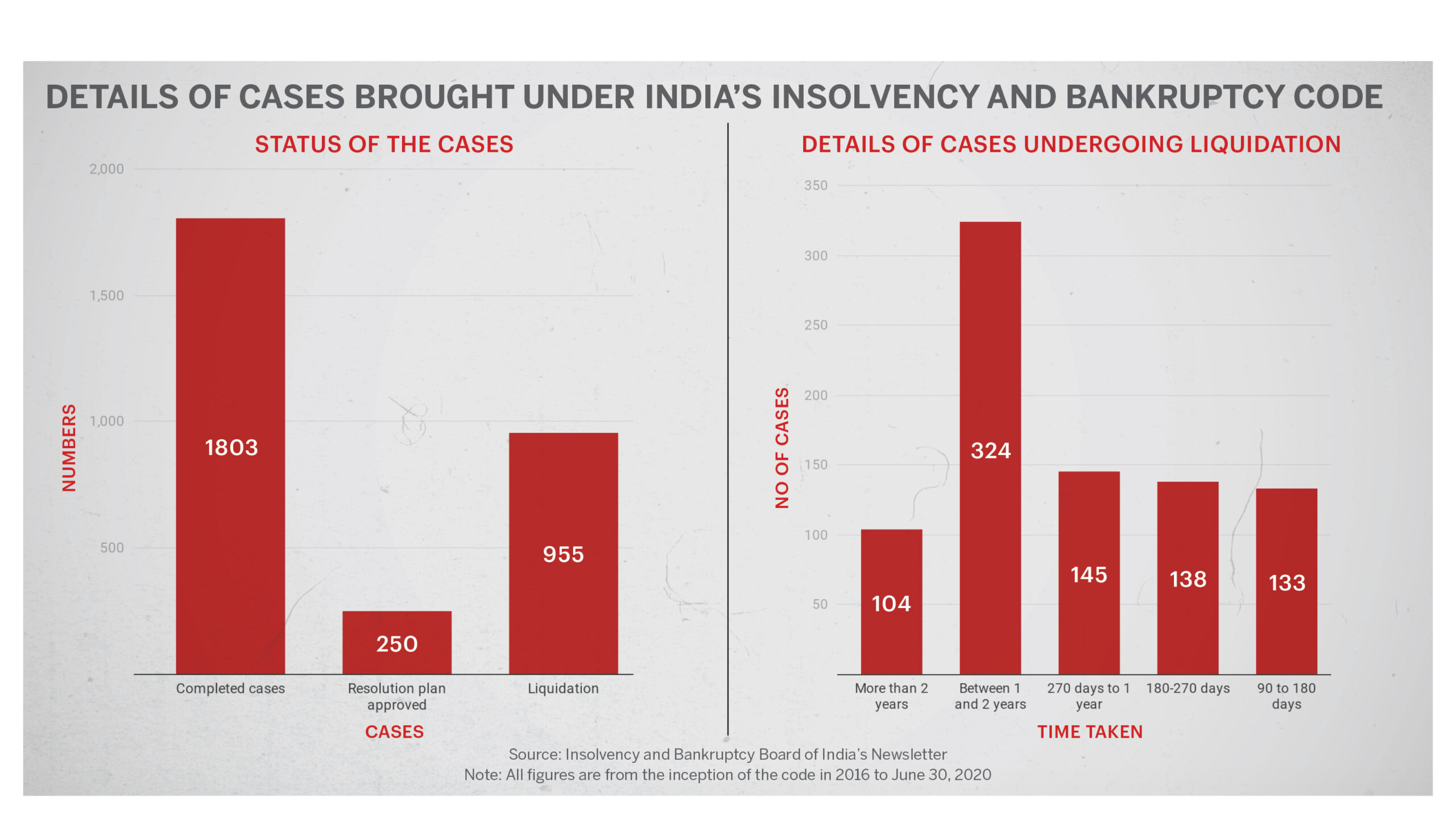 Under the IBC, companies must seek liquidation if they do not find a buyer within a moratorium period, which had been 270 days but in 2019 was extended to 330 days.

Resolution professionals say the amount of debt is a problem many cases.

“The debts of most of the companies admitted under the IBC have already ballooned disproportionately compared to its existing asset value,” said Sumit Binani, an insolvency professional. “So the bids are near the liquidation value of these companies, or even less. This makes it difficult for creditors to approve the plans.”

The liquidation value — the net value of the company’s assets that would be sold — is often less than half the amount owed to creditors.

“The expectations of the creditors and the bidders are different,” said Nilesh Sharma, another insolvency professional. “If the valuations are not suitable, they back out.”

He said that many bidders are often unaware of the details of the companies and are unable to re-evaluate their bids.

The report by Alvarez and Marsal states that: “Information asymmetry, litigation delays and legal uncertainty are major factors deterring investors from actively exploring IBC. Delayed CIRP [Corporate Insolvency Resolution Procedure] cases extending beyond 180 / 270 days has left their capital blocked. Since delays are mostly due to legal issues including frivolous litigations, judicial inconsistencies and the need for clarification on certain judicial provisions, investors face a high degree of uncertainty in their investment outcomes.”

India’s central bank, the Reserve Bank of India, in 2017 instructed banks to initiate the insolvency process for the 12 largest distressed companies in the country, which had a cumulative debt of INR 3.45 trillion ($46 billion). In two years, only five of these were resolved, at a considerable loss to creditors. These five firms owed banks INR 1.17 trillion ($15 billion). Of that, INR 52,519 crore ($708 million) was recovered.

About 1,800 companies have completed the insolvency process since 2016, with about half finding buyers.

Nine hundred and fifty-five companies went into liquidation as of June 2020, according to the Insolvency and Bankruptcy Board of India (IBBI), the regulator for insolvency proceedings. 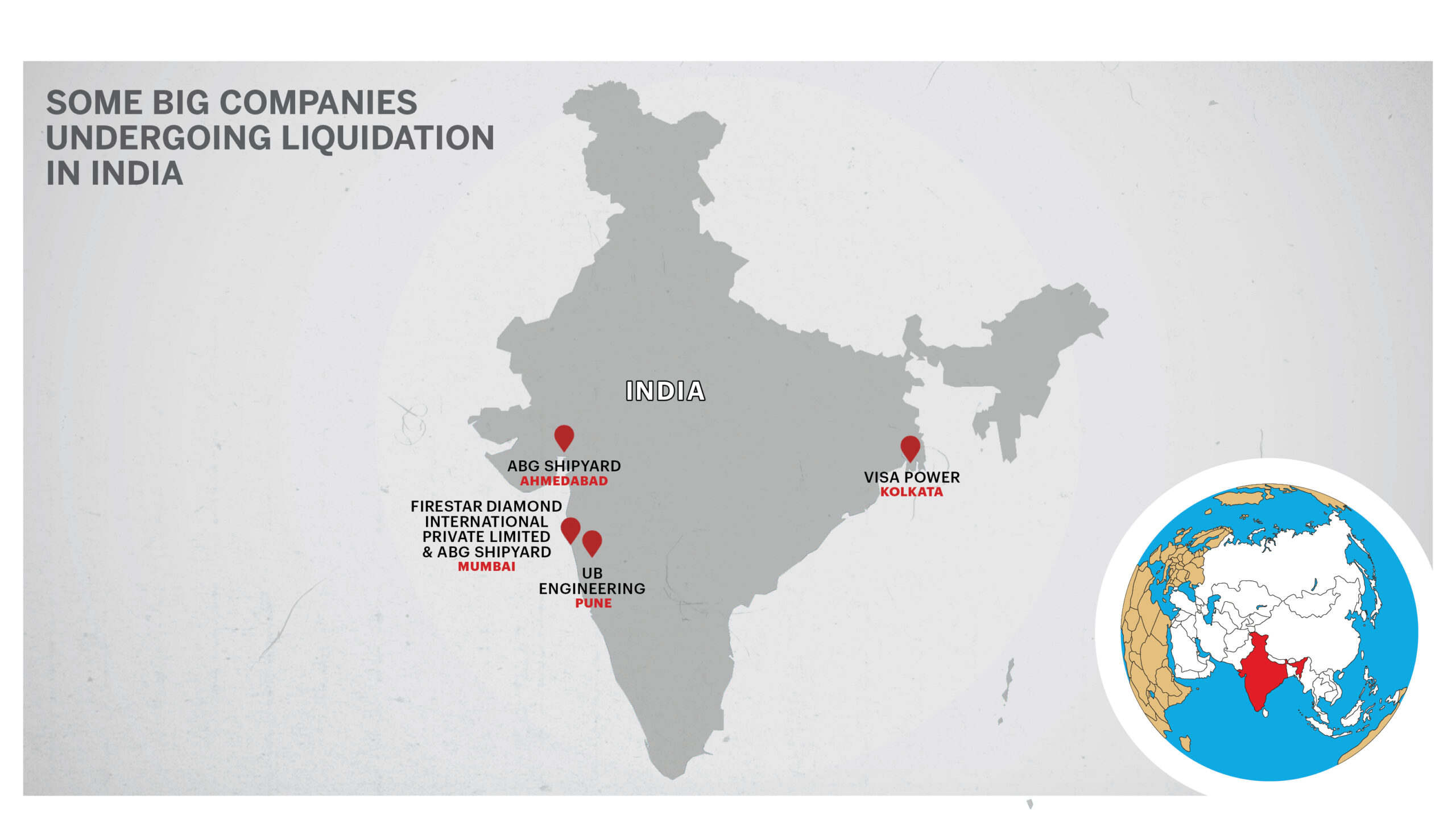 Of the 955 companies that have opted for liquidation, 88 have completed the process, 400 have been in court for a year, and 100 have been tied up in court for more than two years, according to IBBI.

“What the reason is for sending a company to liquidation, or why it cannot be revived should be known to all stakeholders,” said Pavan Vijay, an insolvency professional. “This will bring more transparency and accountability.”

“Bidders are not fully aware of the processes,” said Binani. “Nor is there a centralized auction system.” “A clear policy for liquidation is needed.”

Despite the issues involved, the stressed asset market in India remains a major opportunity for investors, the Alvarez and Marsal report states. “The entry of global capital in this space can strengthen the process based on best practices observed in more developed stressed asset markets.

“The majority of investors&mldr; believe that this opportunity is supply driven, and there is a unanimous view that these assets are expensive as compared to other matured markets,” the report states.

(Edited by Siddharthya Roy and Judith Isacoff. Map and graph by Urvashi Makwana.)