CHENNAI, India — American tech mogul Jeff Bezos, who owns Amazon, had one billionaire to fight in the Indian e-commerce space —  Mukesh Ambani, who owns Reliance Industries. Now, another — Gautam Adani, who owns the Adani Group — has put a leg into India’s highly competitive e-commerce market, which is expected to grow to $200 billion by 2026.

Walmart-owned, and one of India’s largest e-commerce firms, Flipkart has inked a deal with multinational conglomerate Adani Group to build one of its largest fulfillment centers in the financial capital Mumbai.

The fulfillment center, a distribution facility where inventory is stored, so online orders can be picked, packed, and processed, is expected to boost Flipkart’s supply chain capabilities in a tightly contested three-pronged e-commerce race.

Flipkart and Adani Group have not disclosed the financial terms of the agreement. Adani Logistics, a unit of Adani Ports & Special Economic Zone Ltd, will build a 534,000 square foot fulfillment center and lease it to Flipkart to meet the “growing demand for e-commerce in India’s western region”.

“This broad-ranging partnership across our logistics and data center businesses is a unique business model, and we see this as a great opportunity to serve Flipkart’s physical as well as digital infrastructure needs,” Karan Adani, chief executive officer of Adani Ports and Special Economic Zone, said in a joint statement on April 12. 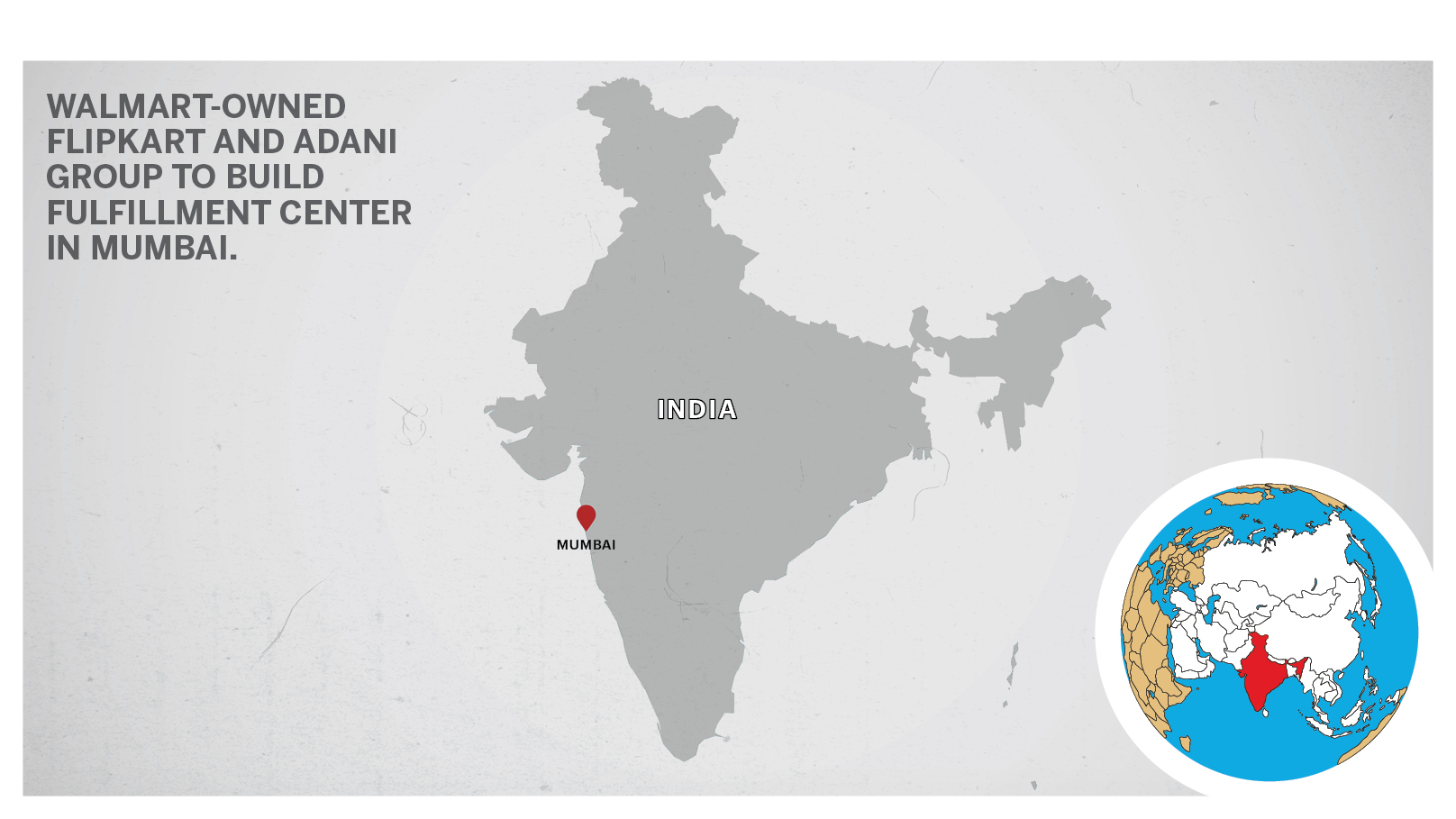 The facility, which can house 10 million inventory units and is roughly the size of nine football fields, is expected to be operational in the third quarter of 2022.

Based in India’s tech capital Bengaluru, Flipkart will also develop its third data center at AdaniConneX Pvt Ltd in the south Indian city of Chennai to store data locally. AdaniConneX is a recently formed joint venture between U.S. EdgeConneX and Adani Enterprises, the flagship company of Adani Group, to provide data center solutions.

“The big thing for all e-commerce companies and companies like Adani is having real estate in the right location and offer services and facilities on top of that,” Ashutosh Sharma, vice-president and research director at Forrester Research, India, told Zenger News.

“Having warehouses and distribution centers built closer to import hubs such as Mumbai, Vishakapatnam, and Chennai is a huge advantage. Adani already has a huge presence in these ports and the real estate in those coastal cities. It allows them to handle the shipment, and companies like Flipkart need this kind of capability,” Sharma said.

Flipkart has not disclosed the number of its fulfillment centers in India, but industry estimates vary between 50 and 60. Rival Amazon India said it has 60 such centers across 15 states as of July 2020.

As Amazon and Reliance Industries invest in scaling up their warehousing facilities, Flipkart is following suit and has been steadily investing in its logistics and supply chain capabilities for a while.

“An e-commerce business is not limited to simply developing a website and selling goods online, but it depends heavily on efficient supply chain management,” Karan Chechi, director at TechSci Research, told Zenger News.

“The expansion of the facility in one of the most demanded Indian cities is expected to help Flipkart gain a competitive edge over the other existing e-commerce players in the country.”

Amazon and Reliance Retail, part of Reliance Industries, have also pumped money into their e-commerce operations.

The latter bought Future Group’s Retail unit for $3.4 billion and is involved in a legal battle with Amazon India, who is opposing the deal. With the deal, Reliance also acquired Future Retail’s vast logistics and warehousing business.

The nationwide lockdown last year in India due to the pandemic saw e-commerce firms ramping up their warehouse facilities to meet a surge in demand as most of the country was confined to their homes.

“At present, the pan-India footprint of e-commerce warehousing is 4.6 million square meters (49 million square feet), and more than half of it is occupied by a single player, Amazon,” according to a report from real estate consultancy Knight Frank.

Flipkart is in second place with around 15 percent share, while the total occupancy of the top two e-commerce players is about 70-75 percent, the report notes.

The Indian warehousing market is expected to grow at a compound annual growth rate of 9.8 percent to reach $19.53 billion by 2025, as per a Research & Markets release.

Flipkart’s parent Walmart entered the Indian market in 2007 with its business-to-business (B2B) joint venture with Bharti Enterprises, another multinational conglomerate.

“If you look at it from Walmart’s perspective, they had partnerships from the beginning before they entered the market,” Devangshu Dutta, chief executive officer of retail and e-commerce consulting firm Third Eyesight, told Zenger News.

“If you look at the current environment, Adani or Reliance is a good partner to have. Flipkart’s deal is for logistics and data, and it’s not like 100 percent of their fortunes are tied to Adani. It probably provides some cushion against the market pressures that might happen,” Dutta said.

The post Flipkart Gets Billionaire’s Backing To Boost Itself For Fight With Amazon, Reliance appeared first on Zenger News.