The Hindi film industry, popularly known as Bollywood, has seen a lot of changes in its 70 years of existence. But one thing has remained consistent — their idea of ‘beauty’, recent research has claimed.

The Artificial Intelligence (AI)-based computer analysis, led by Indian-origin researchers at Carnegie Mellon University in the US, revealed that babies whose births were depicted in Bollywood films from the 1950s and 60s were more often boys; in today’s films, new-borns are about evenly split.

“Our argument is simple,” the researchers wrote in their paper. “Popular movie content reflects social norms and beliefs in some form or shape.”

They selected 100 popular Bollywood films from each of the past seven decades, along with 100 top-grossing Hollywood movies from the same period, and applied Natural Language Processing to the subtitles of 1.1 million dialogues from the 1,400 films chosen.

They then used statistical language models to analyze subtitles of those 1,400 films for gender and social biases, looking for such factors as what words are closely associated with each other.

The researchers took a look at the beauty conventions in movies by using a so-called cloze test. Essentially, it’s a fill-in-the-blank exercise: “A beautiful woman should have BLANK skin.” A language model normally would predict ‘soft’ as the answer, the researchers noted. But when the model was trained with the Bollywood subtitles, the consistent prediction became ‘fair’. 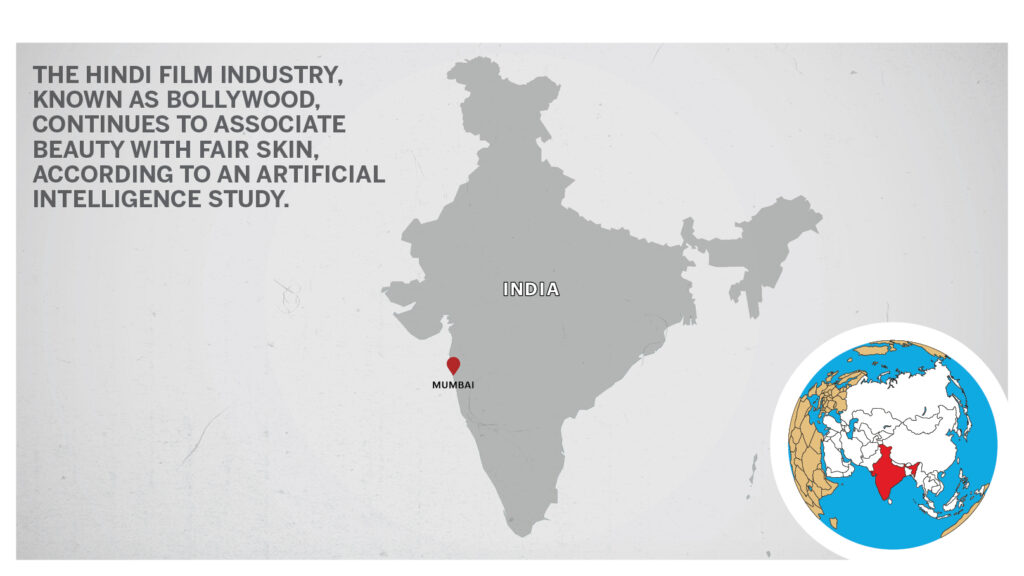 The same thing happened when Hollywood subtitles were used, though the bias was less pronounced, said the study.

For years, the Indian entertainment industry has been promoting skin-lightening products and “fairness creams” with the promise of helping the user get one shade closer to fame and success, much like the actors in the advertisements.

In 2020, the Black Lives Matter protests in the wake of George Floyd’s murder reignited a conversation on this preference for lighter skin in India’s Hindi film industry, and how it not only gives out roles to predominantly fair-skinned actors but also indulges in the brown face to portray dark-skinned characters.

Famous Bollywood names like Priyanka Chopra Jonas who endorsed fairness products have spoken about their regret for doing so.

“There is one Bollywood song from the late 1970s by Mohammed Rafi which goes, ‘kahin ek masoom nazuk si ladki bohut khoobsurat, magar saanwali si (there is a girl who is delicate and very beautiful, but she is dark). So, even if the girl is beautiful her skin color is pointed out as a drawback,” Radha Rajadhyaksha, a film critic and columnist, told Zenger News.

“In Bollywood, quite early on songs and movies focused on the beauty of a woman in a particular light and this was before the problem of colorism was pointed out. But I think it exists, even more, today because everyone looks the same,” Rajadhyaksa said.

“They all are extremely thin, fair, and tall, even in real life there is an obsession with a particular type of look, everybody is going to the gym no one is comfortable in their skin. It’s a vicious circle, art influences people, or they influence art, or both influence each other,” she said.

“Culturally, colorism is a deep-seated belief in India, and its toxic influence is seen and felt in everyday life,” said Kavitha Emmanuel, the founder of Women of Worth, a Chennai-based non-profit organization. “Its influence spans between the choices of life-partners, a comment made when a child is born, discriminatory sayings. It affects the mental health of its victims by having a strong negative impact on the self-esteem of individuals.”

After the Black Lives Matter protest, media companies, marriage agencies, matchmaking sites, and consumer goods companies in India are changing how they advertise products. Stereotypical words like fair-skinned, light-skinning, tall are taken down from the advertisements. But changing the words has had little impact on the idea of fairness behind these products.

Emmanuel points out that the fair-skinned standard of beauty affects the career, mental health, professional life, and marriage prospects of a person in India.

In India, the traditional practice of matchmaking has moved from matrimonial ads in newspapers to matrimonial websites. Recently, Hindustan Unilever Limited, an Indian consumer goods company has partnered with Shaadi.com, a matrimonial site, and The Times of India matrimonial ads segment to eliminate the use of words such as “fair” or “tall” from the clients’ advertisements.

As per the deal, a Dove brand promotion will encourage advertisers as well as those reading the matrimonial advertisements to look beyond the physical beauty and dive oneself into the inner beauty. Last year, Shaadi.com had launched a filter that allowed people to search for their partners based on skin tone. However, they withdrew the filter after a rigorous backlash.

Shaadi.com and Hindustan Unilever refused to comment when Zenger News asked about their recent collaboration.

India Fairness Cream & Bleach Market Overview, 2018-2023, shows that the women’s fairness cream category is anticipated to reach market revenues of more than INR 50 billion ($682 million) by the year 2023. By capitalizing on the insecurity experienced by Indian dark-skinned girls and boys, the companies managed to involve in a profit of over INR 35 billion ($450 million) annually.

Following controversies, Hindustan Unilever Limited dropped the word “fair” from ‘Fair & Lovely’ and renamed it as ‘Glow & Lovely’ on July 2, 2020. This initiative has been taken as a part of the evolution of its skincare portfolio “to a more inclusive vision of Positive beauty.”

“We are making our skincare portfolio more inclusive and want to lead the celebration of a more diverse portrayal of beauty. Fair & Lovely and the brand communication progressed from fairness to glow which is a more holistic and inclusive measure of healthy skin,” said Sanjiv Mehta, the chairman and managing director of Hindustan Unilever, in a statement.

The common ingredients of fairness cream are preservatives, fragrance, and heavy metals such as Arsenic, lead, and mercury. WHO Researched and found out that inorganic mercury present in skin lightening products and soaps can cause kidney damage, skin rashes, skin discoloration and scarring, reduction in skin’s resistance to bacterial, and fungal infection.

Protest against fascination for fair skin and how adversely it has been affecting the psyche of Indian society, has been gaining ground via social media. Women of Worth in the year 2009, launched a campaign named “Dark is Beautiful.” The campaign picked up steam with Nandita Das, an Indian actress, coming on board.

With the George Floyd incident, actors like Priyanka Chopra and Disha Patani raised their voices against the brutal discrimination of skin color.

“Things won’t change unless people living in this society change. We as creators of the film are criticized for not changing, but then again this is a business and what people or the audience want to view is women in a particular light. I think at a superficial level the change is present, the fact that we talk about the color-based bias in the country and the industry means there is awareness, but I don’t think at the ground level things have changed,” said Tannishtha Chatterjee, an Indian film actress and director.

Chatterjee points out that in terms of inclusive beauty standards, whenever a dusky girl is cast in a film or a heavy girl is taken for a role, it is only when the film is about the heavy or the dusky girl.

“We make a film about colorism, heavy women, gay rights. I find that regressive because that means you are pinpointing the issue. We have done that in the past, now in 2021 these things should be inclusive without underlining. The day we have a representation of dusky women or sexual preferences or heavy bodies in the industry without undermining it, that’s when we will change. Just make a film and make difference in your casting choices,” said Chatterjee.