NEW DELHI — Gaurav Raturi, an Indian film buff, went around the film festival circuit in the country for a few years till 2019 trying to find out if there were any takers for pay-per-view streaming platforms for independent cinema.

Most people who heard his idea, said: “Who will pay to watch our films online?”

Despite the naysayers, Raturi knew there was a market he could explore. And, in August 2020, he launched Cinemapreneur, a pay-per-view streaming platform for independent films. To begin with, he had only 25 films — most of which did not get screened in big cinemas or make it to bigger platforms such as Netflix or Amazon Prime.

But, despite the niche market, his platform took off. The pandemic, which had shut down cinemas and stopped projects from going on the floor, had also created a market for watching films online. Cinemapreneur seized this opportunity. 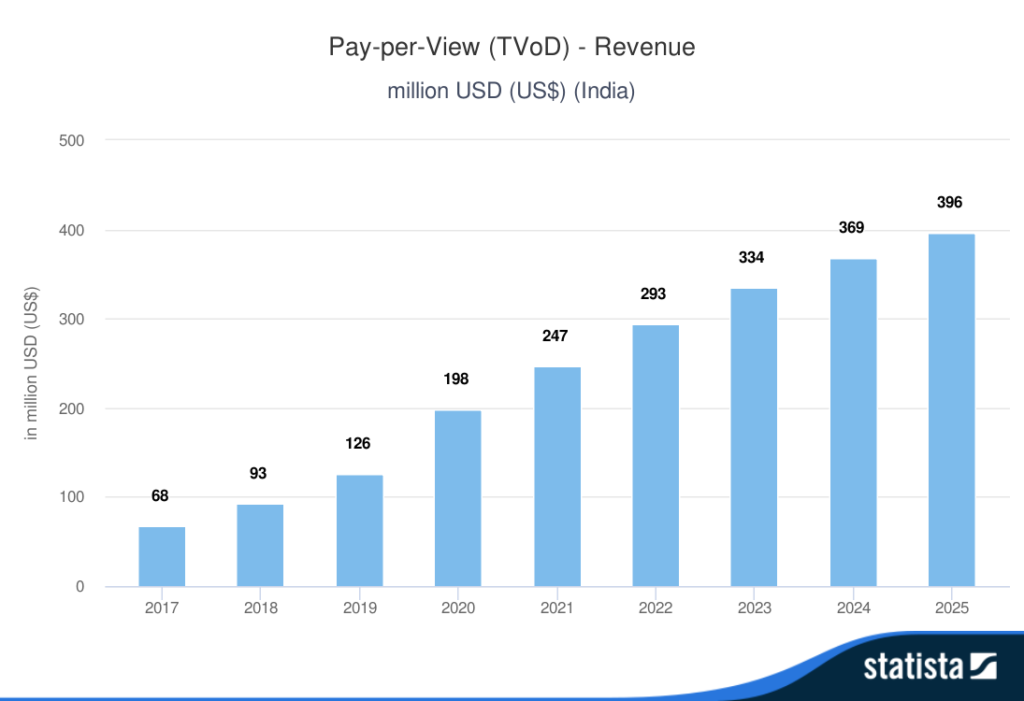 “But now, even big players in India such as BookMyShow Stream and ZeePlex are entering the scene. I feel: ‘We were so right about it!’,” he said.

India’s film industry is one of the largest in the world, with an estimated market size of INR 183 billion ($2.5 billion) in 2020. This includes not only Bollywood — the Hindi film industry based mostly out of Mumbai — but also about 20 regional film industries that make movies in Tamil, Telugu, Kannada, Bengali, Punjabi, Bhojpuri, and other languages.

The pandemic disrupted production schedules and release dates, and the industry was vocal about not getting sufficient help from the government, but it is expected to grow to INR 260 billion ($3.6 billion) in 2024.

“The TVoD model allows us to disrupt the typical avenues for film distribution and opens up a huge realm for independent filmmakers,” said Raturi. Now, Cinemapreneur has 45 feature films, documentaries, and shorts.

This is, however, not a new phenomenon in the country. YouTube and Google have been offering movies on rent and purchase for years. Satellite television service Tata Sky launched Showcase, its pay-per-view service, in 2006. 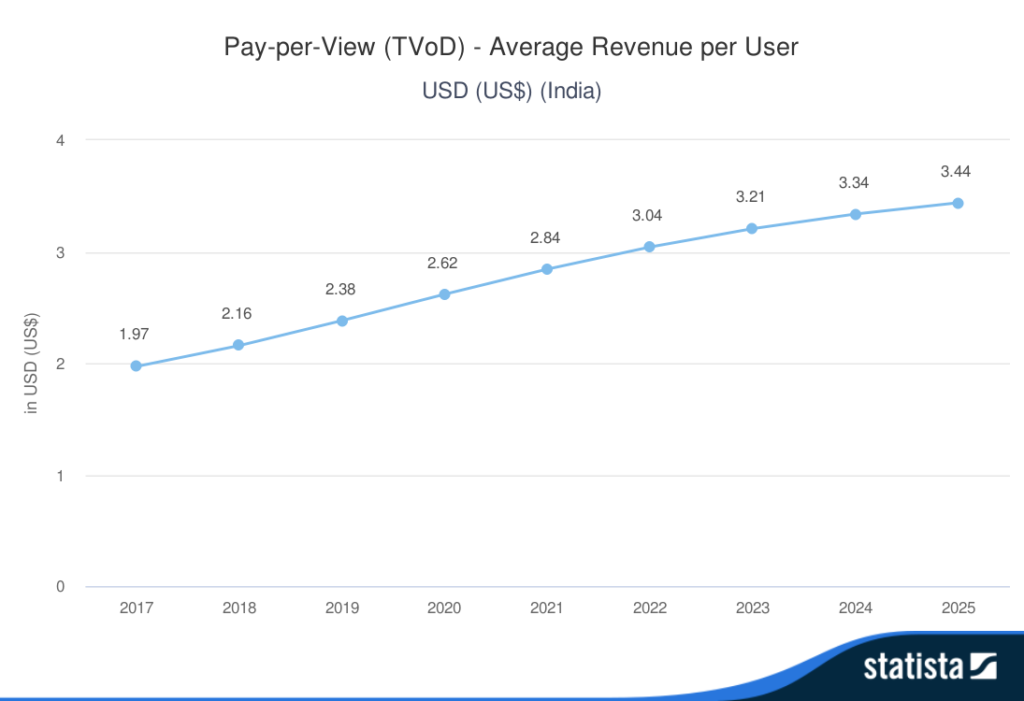 The National Film Development Corporation of India (NFDC) launched www.cinemasofindia.com in 2012. Established by the government in 1975, NFDC has produced some best-known films from the parallel cinema movement and financed the work of internationally reputed directors such as Satyajit Ray, Shyam Benegal, and Mani Kaul.

The latest entrants in the TVoD experiment in India are ZeePlex, ShemarooMe Box Office, and most recently, BookMyShow Stream. The pay-per-view model is already quite popular in the UK and the US but remains to be explored in India.

The country has a well-developed subscription video-on-demand market, with Netflix, Amazon Prime Video, and Disney Plus Hotstar doing brisk business, along with domestic streaming platforms such as ALTBalaji, SonyLIV, VOOT, ZEE5, and MX Player, among others.

Digital media itself is going through a boom in the country. In 2019, it became the third-largest segment in the media and entertainment sector. The growth trajectory continued in 2020, with the number of paid subscriptions going up to 100-125 million from 49 million in 2018, according to a report by Boston Consulting Group and Confederation of Indian Industry.

“The pay-per-view model has made a strong beginning,” Shariq Patel, chief business officer, Zee Studios, told Zenger News. “There is strong monthly growth, and it is here to stay.”

ZeePlex, the TVoD service of Zee Studios, was launched in October 2020 with the Hindi film “Khaali Peeli” and the Tamil Film “Ka Pae Ranasingam”.

A few days before, on Sept. 4, 2020, Disney released its fantasy drama “Mulan” as a premium video on Disney+ in the US. The film’s theatrical premiere was on March 9, 2020, but the pandemic forced Disney to cancel its release across the country. Subscribers paid a premium of $29.99 to watch the film.

“Hollywood leads the way — in technology, content, monetization, and production,” he said. “Whatever they do has a ripple effect everywhere. In India, we are still three to five years away from a developed TVoD market. But, it has begun, and it will grow.”

Different players in the segment are trying different strategies to woo audiences.

ShemarooMe Box Office, for example, offers a new film every Friday at INR 100 ($1.4). Viewers can watch the movie multiple times over three days.

ZeePlex launched the Bollywood film “Suraj Pe Mangal Bhari” three weeks after its theatrical release on Nov. 13, 2020, and the Telugu film “Solo Brathuke So Better” a week after it hit the big screen on Christmas last year.

Cinemapreneur tried a 99-hour release for “Nirvana Inn”, which had its world premiere at the Busan International Film Festival 2019.

“TVoD gives a lot of flexibility to filmmakers,” said Cinemapreneur founder Raturi. “A film can create some buzz through it, and get some spotlight. A pay-per-view release can even lead to an organic SVoD demand, getting a larger audience for the film.”

BookMyShow Stream entered the market with 600 titles, including Christopher Nolan’s “Tenet”, Gal Gadot-starrer “Wonder Woman 1984”, and horror fantasy “The Craft: Legacy”. It struck deals with production giants and independent distributors across the globe.

The pandemic might have given the pay-per-view segment a shot in the arm, but is the boom going to last? As India catches up on vaccinations and cinemas start reopening, will people still be interested in watching movies at home?

“The cinema market is in an evolving situation, and we expect the industry to come to some level of normalcy in the next six to eight months,” Shibasish Sarkar, Group chief executive officer, Reliance Entertainment, told Zenger News.

“People [in the film industry] are trying to explore if we can provide films that do not get a theatrical release with a window,” he said.

“Whether it will succeed or not, only time will tell,” said Sarkar.

The post Enter Pay-Per-View, In One Of The World’s Largest Film Industry appeared first on Zenger News.