American pop star Rihanna and Swedish climate activist Greta Thunberg were burned in effigy in New Delhi days after they had posted support on social media for India’s farmers who for months have been protesting new farm laws.

Activists from the United Hindu Front who took to the streets last week also burned effigies of former adult film star Mia Khalifa and photos of Meena Harris, an American lawyer who is a niece of US Vice President Kamala Harris. Meena Harris had also tweeted in support of the farmers.

Some of the protesters carried signs that read, “No one is allowed to interfere India’s internal affairs,” and “Mia Khalifa regains consciousness.”

Rihanna, who has more than 101 million followers on Twitter, sparked outrage with her tweet on Feb. 2: “why aren’t we talking about this?!” with a link to a CNN story about the government cutting internet service in Delhi as farmers clashed with police.

On the day of the protests against her, Thunberg tweeted: “I still #StandWithFarmers and support their peaceful protest. No amount of hate, threats or violations of human rights will ever change that.” 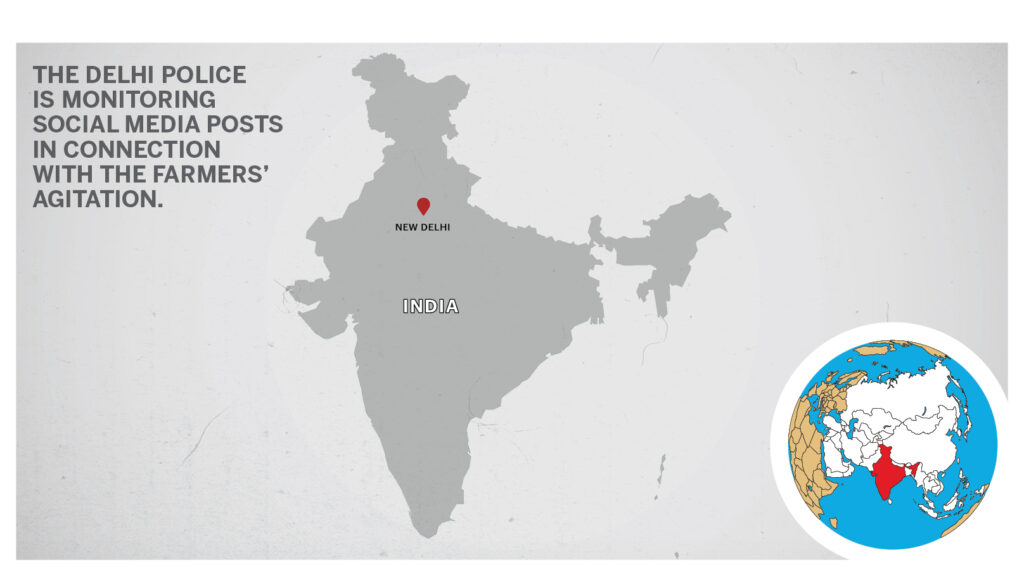 The celebrities’ posts have prompted a police investigation.

“The Delhi Police is monitoring social media posts in connection with the farmers’ agitation,” said Special Police Commissioner Praveer Ranjan. “Delhi Police has identified more than 300 social media handles that have been used for pushing hateful and malicious content. These handles are being used by some organizations/individuals having vested interest, and they are spreading disaffection and ill-will against the government.

“It came to our notice that one document titled ‘toolkit’ was uploaded through one of the handles on a particular social media platform,” he said.

The alleged “toolkit” containing information on how to back the farmers’ protests reportedly was tweeted and later deleted by Thunberg. She was not named in the First Information Report (FIR).

The FIR was registered under sections of the Indian Penal Code dealing with sedition, promoting enmity between different groups, provocation with intent to cause riots and criminal conspiracy.

Ranjan said there are indicators that hostile “deep-state actors” were either behind the farmers’ protests or would join in to exploit the sentiments.

“Preliminary inquiry has revealed that the toolkit in question appears to have been created by a pro-Khalistani organization, Poetic Justice Foundation,” he said in a press statement. “The unfolding of events in the past few days, including the violence on Jan. 26, has revealed copy cat execution of the ‘action plan’ detailed in the toolkit.”

The government has also asked Twitter to delete 1,178 accounts that it says are linked to Khalistan sympathizers or backed by Pakistan. It had earlier asked the micro-blogging site to delete 257 such accounts. The government under section 69 (A) of the Information Technology Act can take action against posts and accounts that may pose a threat to public order.

Jack Dorsey, the chief executive of Twitter, had drawn criticism over neutrality from the government recently after he liked a few tweets by celebrities supporting the farmers’ protest.

Indian Prime Minister Narendra Modi — playing on the term FDI [foreign direct investment] — said on Feb. 8 the country needs to be alert against harmful influences from outside the country which he called “foreign destructive ideology”.

Hundreds of protesters and policemen were injured when farmers staged a tractor parade in Delhi on Republic Day, Jan. 26, and detoured from agreed routes. During the protests, internet service was suspended in areas where violence had broken out.

After the tweets by Rihanna ad Thunberg, a spokesperson for the Ministry of External Affairs, Anurag Srivastava, tweeted on Feb. 3 that the “temptation of sensationalist social media hashtags and comments, especially when resorted to by celebrities and others, is neither accurate nor responsible.”

The head of a major farmers union said that the farmers “do not know who Rihanna or Greta is; we are mere farmers.”

Yudhvir Singh, general secretary of the Bharatiya Kisan Union, said, “We did not reach out to them for help; they understood the situation in this country.”

As far as the protest being linked to some sort of international conspiracy, he said, “It is what the (ruling) Bharatiya Janta Party usually does to defend themselves.”

The U.S. State Department raised questions about the farmers’ protest and the government’s move to block internet services.

“We recognize that peaceful protest are a hallmark of any thriving democracy, and note that the Supreme Court has stated the same,” said a U.S. embassy spokesperson in New Delhi. “We encourage that any differences between the parties be resolved through dialogue.”

Hours after the Biden administration on Feb. 4 urged the government to resolve the issue through dialogue, Srivastava said any protest in India should be judged within the context of ethos and polity in the democratic country.

“The incidents of violence and vandalism at the Red Fort on Jan. 26 have evoked similar sentiments and reactions in India as did the incidents on the Capitol Hill on Jan. 6, and are being addressed as per our respective local laws,” said Srivastava. “The temporary measures with regard to internet access in certain parts of the capital region were, therefore, understandably undertaken to prevent further violence.”

For more than three months, millions of Indian farmers have been protesting, demanding the repeal of three farm laws passed in Sept. 2020. When the peaceful protests turned violent on Jan. 26, they drew international criticism.

The post Counter-Protesters Lash Out At Celebs Who Posted Support For India’s Farmers  appeared first on Zenger News.