MUMBAI — When her first child was born in June 2018 and was kept in a neonatal intensive care unit, Mumbai resident Manisha Bector remembers how he was fed breast milk from the hospital’s human milk bank. As she nursed her second child born in Aug 2020 at home and had an excess amount of breast milk, she ensured that it will go to a newborn baby in need.

Bector has donated nearly 16 liters of breast milk to the Surya Hospital’s human milk bank in Mumbai since September, while continuing to breastfeed her own baby. Her freezer is now stacked up with more breast milk, carefully packed in storage bags, which she plans to send out to the hospital soon. 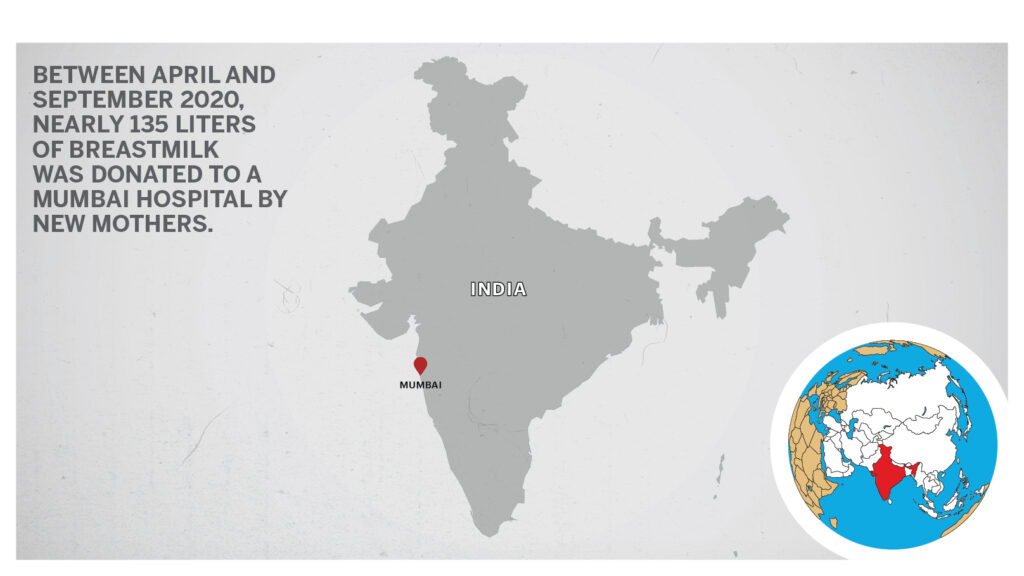 Bector is among the 80-odd new mothers who have donated breast milk to the hospital during the pandemic, playing a crucial role in protecting many babies from infections, providing them with the necessary nutrition, and increasing their chance of survival.

“I was apprehensive at the beginning,” said Bector, 32. “My biggest concern was, what if I don’t have enough milk for my baby? But this concern soon faded away as I continuously had an oversupply.”

Bector believes that the stress of not producing enough milk leads to less supply. “Being stress-free helped me to a great extent,” she said.

Breastfeeding is one of the most effective ways to ensure child health and survival, according to the World Health Organization. It estimates that more than 20 million infants are born weighing less than 2.5 kg (5.5 pounds) every year — over 96 percent of them in developing countries.

“These low-birth-weight (LBW) infants are at increased risk of early growth retardation, infectious disease, developmental delay and death during infancy and childhood,” the WHO states.

The WHO recommends that low-birth-weight infants should be fed a mother’s own milk.

“When a mother’s own breast milk is not available, the alternatives are either expressed breast milk from a donor mother or formula milk. Available evidence shows that compared with formula, donor human milk is associated with lower incidence of the severe gut disorder, necrotising enterocolitis, and other infections during the initial hospital stay after birth.”

After the novel coronavirus pandemic hit Mumbai in March 2020, the national lockdown that followed disrupted many services, including routine healthcare procedures.

“Fortunately, we had a pool of breast milk donors who were willing to donate,” said Dr. Hari Balsubramanian, a neonatologist at the Surya Hospital. “We also eased the process by facilitating zero contact collection of milk so that the new mothers do not have to step out.”

In May, when Covid-19 cases were surging in the city, hospitals struggled to get blood for their patients as blood donation drives had come to a halt, but thankfully that was not the case with breast milk.

“In Surya Hospital too, we were finding it difficult to reserve blood for the babies, but our human milk bank had a steady supply of donations, which was a great relief,” Balsubramanian said.

Nearly 135 liters of breast milk were donated to the hospital by new mothers between April and September 2020.

The quantity of the donated milk ranged from as little as 300 ml (10 ounces)to over 50 liters (13.2 gallons). Babies born in less than 33 weeks of gestation or those who weigh less than 1,500 grams (3.3 pounds) are considered for donor milk if their own mother’s milk is not available or insufficient, said Balsubramanian.

The hospital’s neonatal intensive care unit (NICU) has 65 percent occupancy at any given point of time and it was the same since the pandemic hit. “Therefore, even a small quantity of milk donated by a mother makes a huge difference for us,” he said.

The biggest contributor to the hospital’s human milk bank was 42-year-old Nidhi Parmar Hiranandani, a film producer based in Mumbai. Hiranandani gave birth to a baby boy in February 2020. After feeding her baby every day, she began freezing the excess breast milk for later use.

“Soon my freezer was full as I was expressing more than what my baby needed,” said Hiranandani.

Experts say that the average volume of breast milk consumed by babies throughout the day is about 750 ml (25 ounces). A mother produces anywhere between 850 ml to 1,000 ml in a day, and the more she expresses, the more she produces.

Hiranandani’s friends suggested using the milk to bathe her baby, wash her own hair, and daily body massages. But she was not convinced. An internet search about what to do with the excess breast milk brought up results about the possibility of donating it for needy newborn babies. She then spoke to her gynecologist who directed her to Surya Hospital’s human milk bank.

“I ordered storage bags and froze the milk in them. The hospital would arrange for zero-contact pickups at a regular interval,” said Hiranandani, who has donated more than 50 liters since May. “I still continue to donate.”

When the lockdown eased, Hiranandani visited the Surya Hospital’s NICU with her husband. “It was heartbreaking to see such tiny, preterm babies,” she said. “I felt really good about the decision to donate my milk to babies who needed it for survival.”

Awareness about breast milk donation is still very low in India. Many mothers continue to discard excess milk out of lack of knowledge about such donations or lack of access to a milk bank. Doctors say that many hurdles and stigma persist, and some mothers often fall prey to myths like bathing their babies with the milk for smoother skin. But examples of mothers going out of their way to save milk for other babies are slowly increasing.

“People in India are familiar with the concept of blood donation, but there is little awareness about breast milk donation,” said neonatologist Dr. Jayashree Mondkar, who has been associated with India’s first milk bank since its inception in 1989. The milk bank in the civic-run Lokmanya Tilak Municipal General Hospital in Mumbai now functions as a center that assists other hospitals in starting their own milk banks.

“Things are improving,” said Mondkar. “We have 83 milk banks in India. The number rose fast after 2015, and now we have many more milk banks being set up across the country.”

New mothers are advised to store the milk in the home refrigerator’s deep freezer section and send it to the milk bank within 15 days of expression. At the milk bank, the frozen milk is pasteurized, tested for pathogens, and stored for use.