Boxing legend James Toney predicts a ‘vicious’ outcome in a potential bout between him and former heavyweight champion of the world, Mike Tyson.

Toney concluded his legendary boxing career with 77 wins, including winning more than 50% of his bouts by way of knockout, accentuating his moniker, ‘Light’s Out.’

An even more astonishing stat is in his 90 professional bouts, Toney has never been knocked out. Due to Covid-19, Toney’s Nevada Boxing Hall of Fame induction ceremony has been postponed.

Toney’s masterful skillset in the ring also qualified him eligible to be enshrined into the International Boxing Hall of Fame as well. However, that honor is still pending because of the pandemic.

With Tyson’s recent exhibition fight against Roy Jones Jr. and Iron Mike’s upstart, ‘Legends Only League,’ Toney wants in on the action by setting his sights on a showdown with Tyson or spark a rematch with Roy Jones Jr. who handed Toney his first career loss in 1994.

Toney, never short of words, opens up about the potential fights that the ‘Legends Only League’ can produce, talks about his Hall of Fame career, and much more. 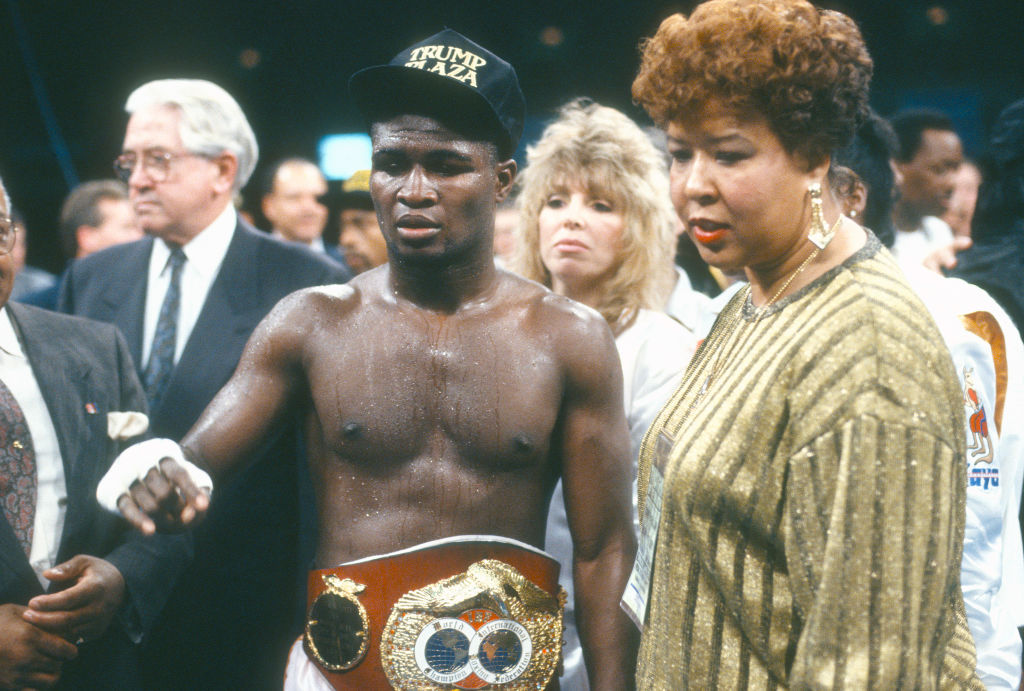 Toney: Thank you, man. I’m enjoying life. Actually, I was supposed to go in last year, but because of the pandemic s**t it didn’t happen, so I’m going in with this year’s class. I’ll know more about that on January 3rd. Everybody is telling me that I got in and if that’s the case, I’m good.

Zenger: You fought 90 fights, and you have never been stopped. Is that your biggest accomplishment in the sport?

Toney: I think my biggest accomplishment is becoming the heavyweight champion of the world. That was a big thing because that’s something many men can’t do, especially coming from the middleweight division like I did.

Zenger: For me, the Evander Holyfield win was your most shocking results. Not that you won but the way you dominated him. Do you feel like the Iran Barkley fight was your best performance?

Toney: I believe I had a better performance when I fought Holyfield than Barkley because, for one, I was peaking. I wasn’t old, but I was just peaking at the right time. I got bit by the easy bug. That was an easy fight for me.

Zenger: What are your thoughts on the Mike Tyson vs. Roy Jones Jr. fight?

Toney: Man, I was happy for them. Anytime a man Tyson’s age, 54 can improve his body and lifestyle … people say, you’re too old to do certain things; you’re never too old to do anything. As long as your body and your mind are sharp, you’re in shape and still have your wits, then do it. I was happy for Mike and Roy.

Zenger: I think it opens the door for some fights that couldn’t have been made in the past, but now we could see some of those fights. Would you be interested in fighting someone like Antonio Tarver?

Toney: Man, listen here, the only guys I’m interested in fighting are either Mike Tyson or Roy Jones. The only reason I’m not going to say Tarver’s name is because the only thing he’s going to do is run. Roy gonna run too, but you know what, this time I would be in shape.

Zenger: Seeing Mike Tyson’s weight loss, his journey to get back in great shape, did that motivate you any?

Toney: Percy, newsflash, a hundred pounds ain’t nothing. I lost 100 pounds when I retired in 1997, I ballooned up to 289, something like that.

I fought Steve Little for the IBO Cruiserweight Championship in one year, and I weighed 189 for that fight. A year later, the same year the Bulls and Michael Jordan won their last championship, I was 298.

Zenger: You pride yourself on being a real fighter. Could you fight under the modified rules of an exhibition fight?

Zenger: Which one of the two were you most impressed with?

Toney: I’m happy for both of em, but in my mind, that fight was not a draw. You know who won that fight, Percy.

Zenger: Mike Tyson wanted to fight more and pressed the action for sure.

Toney: It wasn’t Roy Jones. If you look at Roy’s face from beginning to end, this dude was scared to death. Roy Jones was scared to death! After six rounds, he survived, he calmed down, and he did his thing. I’m glad nobody got hurt; everyone seemed happy and healthy.

Beat John Ruiz easier than Roy Jones did with one arm. Holyfield … s**t, I had fun with Holyfield. I played with him. I could’ve knocked him out earlier, but he pissed me off. I wanted to punish him.

Zenger: Your style is not made to move around and use your feet. You have upper body and head movement.

Toney: Yeah! Everybody talks about Floyd, but Floyd is not doing the shoulder roll. I do the real shoulder roll. I’m slick, but I return fire. I don’t move around from nobody. If I fight Mike [Tyson], it would be easier than Holyfield, trust me. Mike is a tremendous fighter, don’t get me wrong. We are two greats, but I was pound-for-pound when I was 35 years old.

Zenger: They cannot have a ‘Legends Only League’ and not include James Toney.

Toney: It should happen, but the reason why it won’t happen is because they are all scared of me. They all scared to death of James Toney. James Toney is the realest. I am the truest-realest fighter there is, and you know that. I would love to get in that league and keep this thing going, though.

Zenger: Always appreciate your time, champ. Hopefully, we get to see you in some of these legend’s fights. Thanks for your time.