MUMBAI, India — Indians who had loved the 2016 hit “The Girl on the Train” starring Emily Blunt can now see the official Hindi remake of the film on Netflix. Released on Feb. 26, it has the same name, but Indian actor Parineeti Chopra has stepped into Blunt’s shoes.

“The structure and the basic material are from the original film and the book,” director Ribhu Dasgupta told Zenger News. “But we have given it our own color. We have rewritten certain characters and certain parts of the film.”

Official remakes are somewhat new in the Indian film industry, one of the largest in the world with estimated market size of INR 183 billion ($2.5 billion) in 2020.

For decades, Indian filmmakers have been accused of lifting stories from Hollywood films. But now, many of them are making official remakes of hit Hollywood flicks in Indian languages. 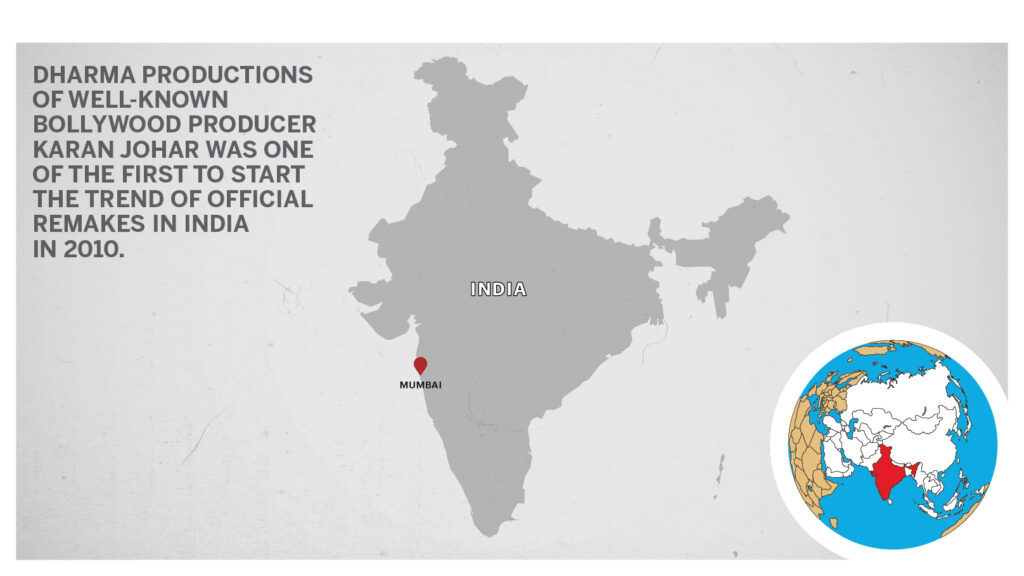 India’s first Oscar-nominated film “Mother India” (1957) was accused of copying the Hollywood film “The Good Earth” (1937). Another iconic film, “Sholay” (1975), which had a five-year run in the cinemas after being released in 1975, was accused of being a rip-off of Akira Kurosawa-directed “The Seven Samurai” (1954) and John Sturges-directed “The Magnificent Seven” (1960).

Over the past decade, however, Indian filmmakers are buying officials rights of Hollywood and international films they want to adapt. One reason for this is the entry of corporate and Hollywood studios in India’s growing media and entertainment industry, which is expected to touch $55 billion by 2024, according to a PwC report.

The other is legal trouble.

In 2003, bestselling author Barbara Taylor Bradford filed a case was in the Calcutta High Court for copyright infringement against Sahara Media Entertainment for a TV serial, “Karishma: The Miracles of Destiny”, it had produced.

Though Bradford did not win the case, Indian filmmakers were alerted to the possibility of legal action in the future.

Another film that got away with alleged plagiarism was “Koi&mldr; Mil Gaya” (2003). Amblin Entertainment, which had produced Steven Spielberg’s “E.T. the Extra Terrestrial” (1982), sued the film’s producers, but the Indian courts did not rule in its favor.

But, in 2009, 20th Century Fox managed to drag BR Films to the Bombay High Court for the film “Banda Yeh Bindaas Hai”, which was an alleged copy of “My Cousin Vinny” (1992). The release of the Hindi film was blocked and the two studios reached an out-of-court settlement to the tune of $200,000.

“Earlier, filmmakers would take ideas and movie plots illegally,” trade analyst Taran Adarsh told Zenger News. “But now the laws are stricter. You cannot pass off such ‘inspiration’ as your idea. It is better to make an official version.”

Celebrity producer-director Karan Johar was one of the pioneers of official remakes in India. In 2010, his company Dharma Productions officially remade the 1998 Hollywood hit “Stepmom” in Hindi as “We Are Family”.

“Our producer (Viacom 18 Motion Pictures) bought the right to the original 1969 Michael Caine film as well as the 2003 remake,” Mastan told Zenger News. “We didn’t want to get into any legal trouble.”

“We Are Family” and “Players” disappointed the box-office, earning INR 42 crore ($5.92 million) and INR 48 crore ($6.6 million), respectively, according to Box Office India, a Bollywood trade website.

“There’s a curiosity among those who haven’t watched the original films,” said trade analyst Amul Mohan. “But, success depends on how the films have been made.”

Several international remakes are in the pipeline this year, as Hollywood plans to piggyback on Bollywood’s plans of bouncing back after the pandemic-induced lockdown.

Streaming platforms are often the ideal home for such adaptations, like Netflix was for “The Girl on the Train”.

Disney’s Hotstar is adapting the British miniseries “The Night Manager” for Indian audiences, having already remade “The Office” and “Doctor Foster”.

Applause Entertainment, another production company, has bought the rights for the Israeli series “Fauda” and has begun production of an adaptation of the French show “Call My Agent!”

“For most filmmakers and production houses it all boils down to the story and whether it is adaptable for the Indian market,” Applause chief executive Sameer Nair told Zenger News. “We look for a universal story which suits the Indian culture.”

Comparison with the original is always a fear in the mind of the directors and producers.

“When you are remaking a popular film or a show, comparisons and criticisms are going to happen,” Rohan Sippy, the director of “The Office”, told Zenger News. “But I know many people who enjoyed both the original and the version I directed.”

“When we are adapting a successful film, it’s possible that many people haven’t watched the original,” Ajit Andhare, chief operating officer, Viacom18 Studios, which is producing “Laal Singh Chaddha”, told Zenger News. “One can’t predict the market, but we can try to understand what the audience wants.”