Wilmington, North Carolina — With an historic election upon us, last-minute court battles are determining whether mail-in ballots received after Election Day will count.

In hundreds of cases fought in more than 40 states, voting rights advocates, candidates and state party officials have challenged and defended voting rules, many of which have been changed this year to ensure that voters can safely cast ballots amid the pandemic.

Many lawsuits center on the deadlines for counting mail-in ballots, which in some states have been pushed to more than a week after Election Day. Others challenge rules for submitting absentee ballots by mail. The Healthy Election Tracker, a project of Stanford University and the Massachusetts Institute of Technology, is tracking 434 court cases across 44 states, all related to changes in voting rules made to accommodate Covid-19 concerns.

In Minnesota, a federal appeals court ruled Oct. 30 that mail-in ballots must be received no later than Election Day. That’s a win for the Republican challengers. It ends the window after Election Day that officials had wanted for validating any ballots held up by delays in mail delivery.

The U.S. Supreme Court ruled Oct. 28 that Pennsylvania and North Carolina can count ballots received after Election Day. That’s a win for Democrats, who wanted added time, given the large number of mail-in ballots cast during the pandemic, to ensure that all votes are counted. In North Carolina, ballots postmarked by Election Day will be counted so long as they are received within nine days after the election.

On Oct. 16, the Michigan Court of Appeals overturned a lower court ruling that had allowed the counting of absentee ballots postmarked by Election Day for two weeks after Nov. 3.  Under the Appeals Court ruling, only ballots received by 8 p.m. Election Day will count.

Voting rights advocates argue that election systems must provide extra time for ballot counting to ensure that any delays in mail delivery do not disenfranchise voters, especially when so many Americans are voting by mail to avoid contagion.

Senior citizens — who are at elevated risk of suffering severe Covid-19 symptoms — must be able to cast their ballots without compromising their health, advocates say. The North Carolina Alliance for Retired Americans demanded the State Elections Board make procedural changes to protect the rights of older voters.

The alliance argued that county election boards need extra time to count ballots, as delays in mail delivery could disenfranchise voters who mail in absentee ballots. Protecting mail-in ballots is particularly important this election, the alliance said, as older voters risk exposure to coronavirus while waiting in long lines to vote.

However, in several states, Republican legislators and campaign directors have argued that loosening balloting restrictions or extending ballot submission deadlines would open the door for voter fraud, a claim widely disputed by election experts. They also have argued that changes to state laws shouldn’t be permitted so close to Election Day.

In Wisconsin, the U.S. Supreme Court sided with Republicans. The justices on Oct. 26 rejected an appeal from Democrats to permit mail-in ballots in the state to be received up to six days after Election Day, so long as they were postmarked by Nov. 3. (The six-day extension for primary voting was enforced in April, Justice Elena Kagan noted in her dissent.)

Although the Supreme Court rejected a request by the Trump campaign and North Carolina Republicans to intervene in the mail-in ballots argument in North Carolina, U.S. District Judge William Osteen also ruled that absentee ballots must include a witness signature — a decision that could invalidate some of the more than 530,000 absentee ballots already cast in the state.

Karen Brinson Bell, executive director of the North Carolina State Board of Elections, said Osteen’s rulings “allow us to move forward to ensure all eligible voters can successfully cast a ballot in the general election.”

Another issue in North Carolina is how voters fill out the envelopes of mail-in ballots. Under state law, an envelope containing an absentee ballot must be signed by a witness. The law allows almost anyone, including spouses, to serve as witnesses, but ballots must provide witness information.

In addressing the demands of the North Carolina Alliance for Retired Americans, the state board ruled in September that voters who submitted absentee ballots with insufficient witness information could correct those ballots by submitting affidavits. The agreement also allows county boards to accept ballots postmarked on or before Election Day up to Nov. 12.

These revisions came when the state election board reached an agreement with the North Carolina Alliance for Retired Americans, which had filed a lawsuit pressing for several changes. The group said the extra time was needed due to concerns about whether delays in mail delivery could disenfranchise voters who use mailed-in absentee ballots.

Richard Fiesta, executive director of the Alliance for Retired Americans, said the board’s decision is a victory for all the state’s voters, but is especially valuable to the 1.3 million North Carolina voters over 65.

One group studying the issue in North Carolina is the Sightline Institute, a Seattle-based think tank. Its analysis shows that ballots cast by minority voters are rejected at disproportionately high rates. It noted that the state was on pace to reject 35,000 absentee ballots. 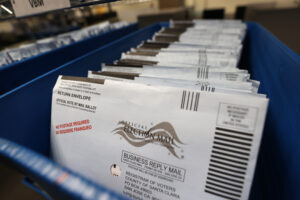 President Donald Trump and his Democratic challenger, former Vice President Joe Biden, are in a tight race in North Carolina, with Biden up 1.9%.

“Even a modest rate of rejection among North Carolina’s absentee ballots could prove not only devastating for voter disenfranchisement, it could determine who wins North Carolina’s 15 electoral votes, which could decide the election,” the Sightline Institute said.