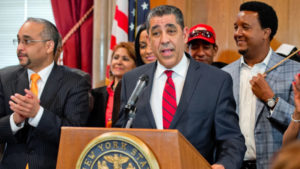 Congratulations on your recent election as Chair of the illustrious Congressional Black Caucus (CBC), which is rightly dubbed the conscience of the United States Congress. And double congrats on your appointment as Chair of the Africa Sub-Committee in the House of Representatives.

This moment is particularly special for the Cameroon American Council (CAC), because we were there when you announced your Cameroonian ancestry and when the Cameroonian Ambassador to the U.S. warmly re-introduced you to us, your Cameroonian cousins. As America’s leading African immigrant advocacy organization, the CAC applauds your dedication to immigration issues by virtue of your personal convictions highlighted in the LA Times about immigration being a Black issue.

This open letter is to strengthen and expand upon the Cameroon American Council’s petition, which successfully culminated with the CBC establishing its first-ever Immigration Task Force in 2013. We also want to reintroduce our 2017 request that the CBC prioritizes Black Undocumented Immigrants on its agenda and within the CBC member ranks.

Specifically, we are asking that you accept the request of membership of all Blacks in Congress, including Congressman Adriano Espaillat (D-NY), a former undocumented individual who, like you and I, is of African descent.

We recently celebrated the birthdays of two visionary Black leaders, Martin Luther King Jr. and Arturo Alfonso Schomburg. Yet, this February, as we honor the birthday of the pioneer Rosa Parks and celebrate Black History Month, it is a perfect time for the CBC to address our request and petition for an inclusive Black agenda and membership.

And like Rosa Parks or Queen Esther in the Bible, it will take a woman to lead an inclusive CBC, for such a time as this…

Such a time like this, when 2019 marks 400 years of our shared African ancestors being sold in Virginia.

Such a time like this, when the United Nations resolution 68/237 declared 2019 as part of The International Decade for People of African Descent.

Such a time like this when the Black community in USA is no longer monolithic. And the diversity and inclusion of ALL African descent is especially needed. For instance, Espaillat’s congressional district of Harlem and Bronx in New York includes a significant African immigrant community (Little Senegal), greater Black immigrant community (Spanish Harlem) and the quintessential Black in America narrative (Harlem Renaissance).

Such a time like this, when Census 2020 is upon us and the rest of America looks to the CBC as microcosm of who will be counted as Black in America.

Your predecessors at the CBC and other CBC members officially voiced two main objections to Espaillat’s membership into the CBC: First, CBC members cannot be a part of two of the three minority/ethnic Caucuses and Espaillat’s membership in the Congressional Hispanic Caucus (CHC), excludes him from CBC. Secondly, the CBC only allows Congress members of African descent, and Espaillat may not be Black or Black enough or self-identify as an African descendant.

To debunk these objections, you would agree that it is indeed FALSE that one can’t be a member of the CBC and simultaneously be part of another ethnic/minority caucus.

On the issue of Blackness, for centuries there have been debates regarding who is Black and who is considered of African descent based upon appearance alone, even in the halls of Congress. Rumors have swelled about Congressman G.K. Butterfield, who some say appears to be white and was chair of Congressional Black Caucus; or Congresswoman Nydia Velazquez who some say appears Black, yet says she is Hispanic and she was chair of the Congressional Hispanic Caucus (CHC). With both of these members of Congress, the Congressional tri-caucus relied on their self-identities and inducted them to CBC and CHC respectively, regardless of their appearance.

That being said, Espaillat, along with (some) Dominican-Americans, self-identify as Black and Latino. In 2002, he was elected as Chair of the New York State Black, Puerto Rican, Hispanic and Asian Legislative Caucus. More recently, the Congressional Research Service and Pew Research note that in 2017, out of more than 500 legislators, only two Members of Congress officially indicated dual racial/ethnic identities, Senator Kamala Harris (Black and Asian) and Congressman Espaillat.

If Kamala Harris is Black enough to be in the Black Caucus, so is Adriano Espaillat.

Unless of course, the CBC is looking at Blackness based on country of origin or immigration status. Congressman Espaillat, born in Dominican Republic, was a former undocumented Black Latino. Not only should he be included in the CBC, but so should the priorities of Black Undocumented Immigrants, such as the recent immigration arrest of Atlanta’s rapper, 21 Savage, an undocumented Black man, by ICE agents.

It will take a woman to push for such a critical inclusion. That woman is you, Chairwoman Bass. You understand the intersectionality of Blacks, immigrants and the undocumented.

From one Cameroonian descendant to another, please expand CBC rules to include ALL descendants of Mama Africa.