PUNE, India – Twelve children, all under the age of five, were hospitalized in a village of India’s western state of Maharashtra on Jan. 31, after health officials gave them sanitizer drops instead of oral polio vaccine drops.

A district official confirmed the news to Zenger News.

“The children came in the morning to take the vaccination, and mistakenly 12 kids were given two drops of sanitizer instead of the polio vaccination drops,” said M D Singh, district collector of Yavatmal.

The incident happened at a medical subcenter, Bhambora Primary Health Care, in Yavatmal district, around 700 kilometers from the state capital, Mumbai, during the National Pulse Polio vaccination drive for children aged between 1 and 5. 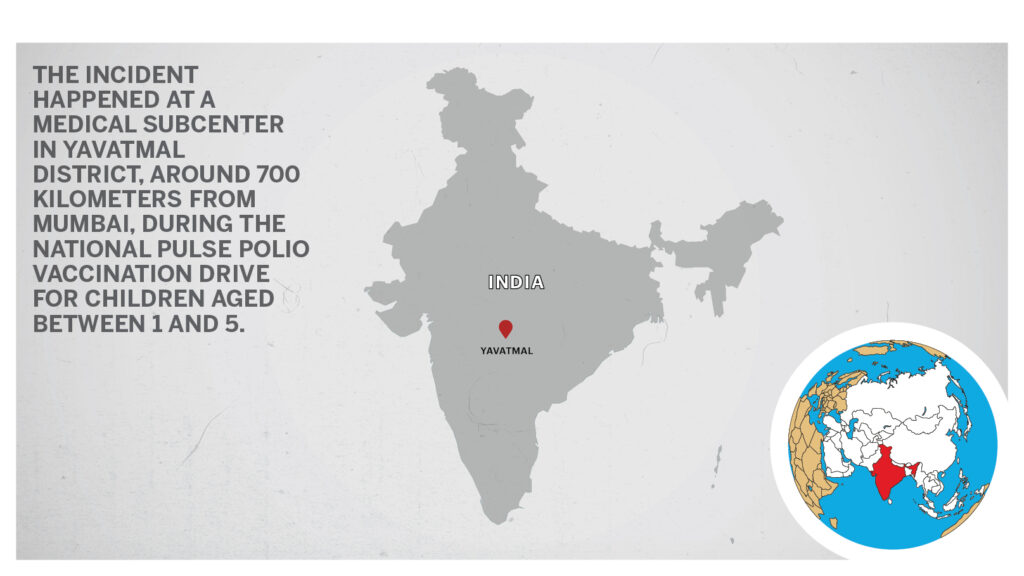 There were three medical representatives present during the incident — a doctor, an anganwadi sevika (a volunteer supervising 40-65 workers and providing them with on-the-job training), and a ASHA volunteer (community health worker instituted by the government).

“All three were terminated from their services,” said Singh. “It is an unfathomed incident because the medical representatives are given a lot of training. The vaccination preparation is going on for the past one month. This kind of negligence is not expected from health staff.”

Singh said it was an exceptional occurrence and that the vaccination drive in the other 434 health subcenters was carried out smoothly.

“We are making sure this does not happen again by increasing the training time for the workers.”

All the affected children were admitted to Vasantrao Naik Government Medical Hospital later that day after one of the children showed adverse effects, including vomiting.

“Since admission, all the babies are stable and playful, they are eating properly,” said Surendra Bhuyar, medical superintendent of the hospital. “While admission, eleven babies were not showing any signs of adverse effects, the other one vomited once. After that, he was put into medical supervision and was fine.”

Singh said the incident was not known until a village sarpanch (head of a village) checked the dosage bottles and found them to be hand sanitizer and not polio doses.

“The 12 kids were called back, and the polio doses were given to them,” he said.

He claimed to be present at the hospital after getting the news.

“As per medical rules, we will observe them for 48 hours, and then they will be released,” he said.

Bhuyar denied there was any medical negligence as they received proper training prior to the vaccination drive, and it was complete callousness from the three medical representatives.

Indian President Ramnath Kovind administered the launch of the National Polio Immunization Day for 2021 on Jan. 30 at his residence.

“As per a provisional report on day one, close to 8.9 million children under five years across the country were given polio drops,” India’s Ministry of Health and Family Welfare said in a statement. “Vaccinations were conducted at close to 700,000 booths which were staffed with around 1.2 million vaccinators and 180,000 supervisors.”

The last case of wild poliovirus in India was reported on Jan. 13, 2011. Since then, the nation has been free of polio for a decade.

The post 12 Toddlers Given Hand Sanitizers Instead Of Polio Drops In India appeared first on Zenger News.