Mumbai — Nearly 1.2 million infants in India missed out on the first dose of the measles vaccine in 2019, a joint report by the World Health Organization and the U.S. Centers for Disease Control and Prevention states. India is one of six countries with a high number of infants who did not receive the vaccine.

Between January and April 2019, India ranked third among countries with the most cases of measles, with 7,246 reported cases, according to Statista.

“India’s national immunization program is very strong. Therefore, the findings of the report are surprising and alarming,” said Dr. Bakul Parekh, president of the Indian Academy of Pediatrics. “In India, we give a combination of measles-rubella (MR) vaccine because there are concerns of congenital rubella syndrome as well. The vaccination for measles is crucial because the disease can cause mortality as well as severe morbidity.”

Infants who do not receive the measles vaccine are vulnerable to secondary infections due to immunosuppression, and their nutrition and growth may also be affected.

Among the possible reasons why infants are not immunized, Parekh said: “There is an anti-vaccine lobby that exists everywhere. There is a lack of education and knowledge about the importance of the vaccine, while some parents fall prey to misinformation and religious beliefs, too. Awareness is very important in making the immunization programs stronger.” 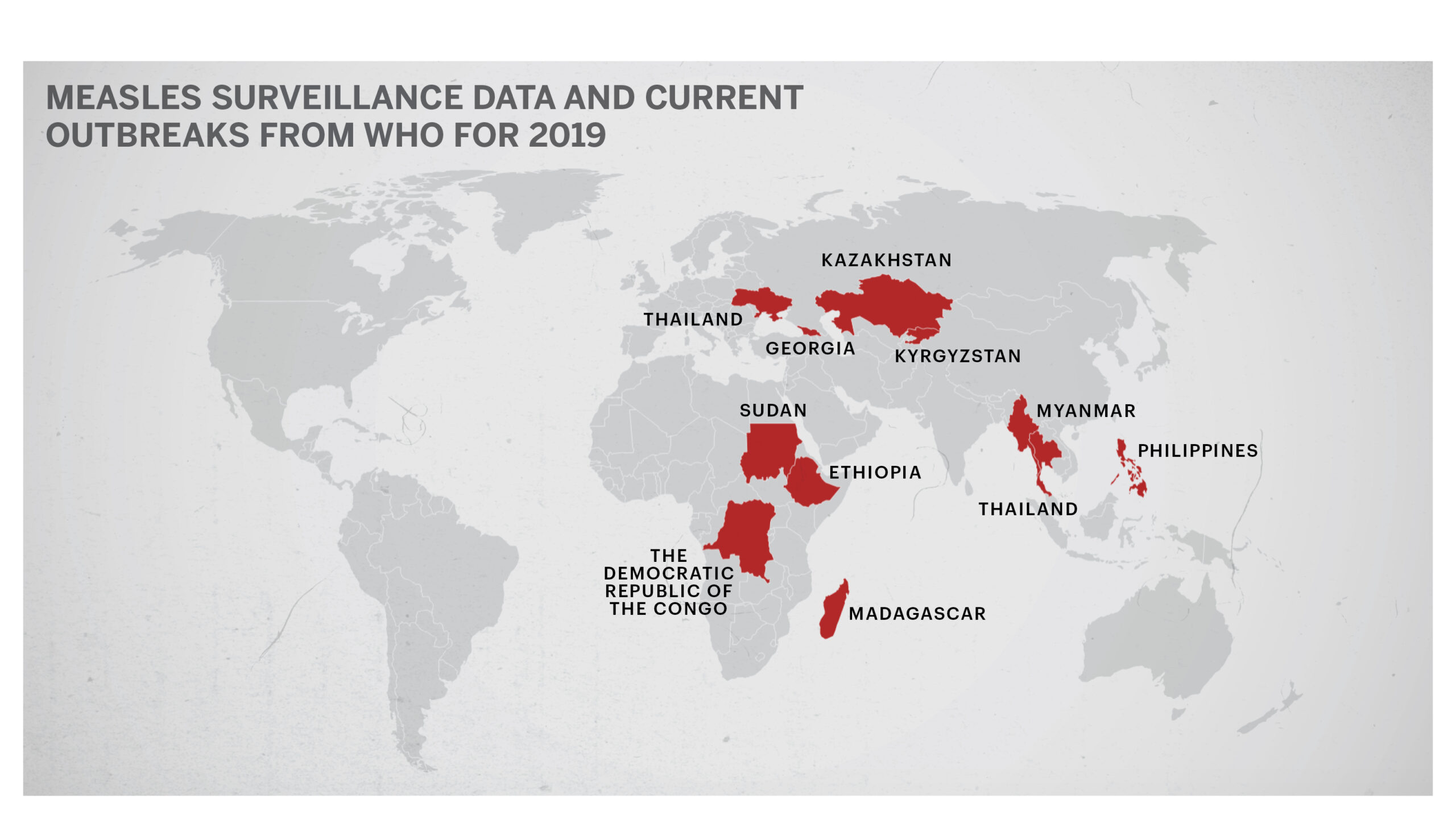 Measles are caused by a virus that is spread through direct contact and through the air.

“The virus infects the respiratory tract and then spreads throughout the body,” the World Health Organization states.

The WHO recommends two doses of measles vaccine, either alone or in a measles-rubella (MR) or measles-mumps-rubella (MMR) combination. In India, measles vaccinations are administered under the Universal Immunisation Programme at 9-12 months of age, with the second dose at 16-24 months.

“Over the last four years, the number of measles cases has gone down drastically,” said Dr. B Avasthi, director of the Department of Pediatrics at Surya Hospitals. “Earlier, we used to see a lot of cases of measles with complications such as pneumonia, gastroenteritis, etc. About 20-30 percent of our admissions used to be measles or measles-related complications. But the sharp focus on immunization has helped in reducing the cases.”

Despite the availability of a safe and effective vaccine, more than 140,000 people died from measles in 2018 globally — mostly children under the age of five. India reported 55,399 cases of measles in 2018.

Before the introduction of the measles vaccine in 1963, and then the widespread immunizations, major epidemics occurred every two to three years, causing an estimated 2.6 million deaths each year, according to the WHO.

The report also highlights greater challenges during the Covid-19 pandemic, during which fewer children have been immunized and state surveillance on the mandatory guidelines was disrupted.

“Many parents delayed the vaccination due to the pandemic and the lockdown, but they are now coming back,” said Avasthi. “Covid-19 definitely disrupted the routine but many who postponed the vaccination are now getting delayed doses.”

The report states that progress in eliminating measles during and after the pandemic will require strategies to include catch-up vaccinations into essential immunization services.

The WHO estimated that as of the end of October this year, “delays in vaccination campaigns in 26 countries have led to 94 million children missing scheduled measles vaccine doses, placing many of them at risk of measles.” 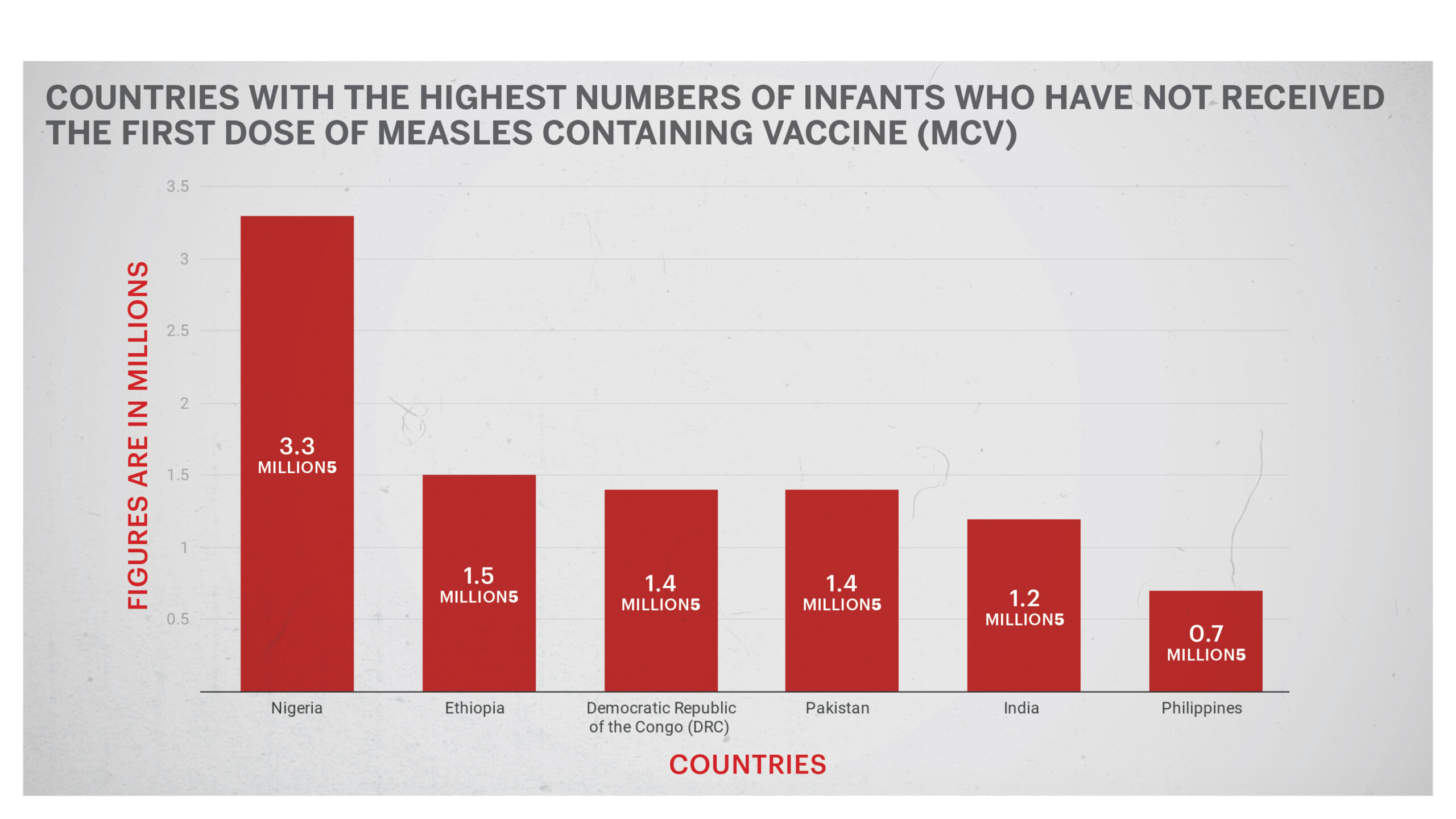 Other reports also warn about the significant impact of vaccine-preventable diseases and a possible spike in cases during the pandemic. Immunization drives were either not conducted due to the lockdown, or parents did not risk stepping out with their children.

A recent report in the medical journal Lancet said data from the first six months of 2020 suggest that measles cases are down in most countries, but noted that this case reduction “is typical of the epidemic cycle of measles, and probably also reflects the reduced transmission of respiratory viruses due to Covid-19 control measures and reduced domestic and international travel. Compromised surveillance and reporting also have a role, with disruptions in many countries.”

In India, routine immunization services have resumed as cities unlock, but it is too early to assess the efficacy as the health care sector is swamped with Covid-19 cases.

“The percentage of immunization has already gained momentum now,” said Dr. Mangala Gomare, executive health officer of the civic body in Mumbai. “All our health posts are fully functional and are getting good response from people. Vaccination of many children has been delayed, but we are encouraging parents to get it done.”

(Edited by Siddharthya Roy and Judy Isacoff. Graph and map by Urvashi Makwana.)

The post 1.2M Infants in India Did Not Get Measles Vaccine in 2019: Report  appeared first on Zenger News.