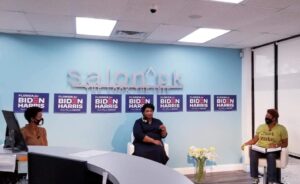 Convention Center for a “Drive-In Get Out the Vote Rally” urging residents to make a voting plan. Finalizing her journey to Duval, Abrams joined Rep. Tracie Davis and Rep-elect Angie Nixon for “Salon Talk in Jacksonville,” a round-table-style discussion on some of the top issues facing Black women and our communities at-large. Abrams challenged Jacksonville voters to bring their advocacy to action through the power of the ballot box. “As we watch our economy spiral out of control, our universal healthcare continually attacked, millions of people unemployed, our small businesses struggling and voting rights challenged, Stacey emphasized to viewers not to panic, but their vote for Joe Biden and Kamala Harris is the only way to restore the soul of this nation,” expressed Rep. Tracie Davis.