“This is historic,” Jones said on CNN Tuesday afternoon. “We now have the President of the United States and a Democratic front-runner competing on who can be the best on criminal justice reform.”

President Trump hit Democratic frontrunner Joe Biden for his work on the 1994 Crime Bill in a Tweet Monday: 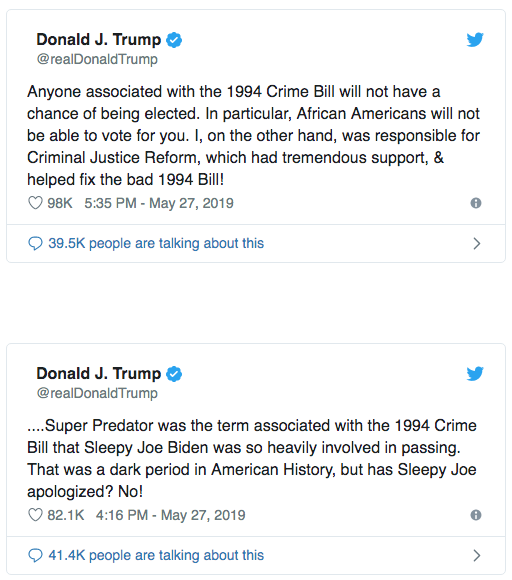 VAN JONES: Let’s just take a step back. This is historic. We now have the president of the United States and the Democratic front-runner competing on who can be the best on criminal justice reform.

For my entire adult life, the parties have been racing who can put the most in prison, who can be the toughest on crime and now you have them arguing and debating, no, I’ll be better at reform, I’ll be better at reform. So as silly as some of this stuff is, Trump can’t say to, you know, Biden, well, because of your past, nobody can vote for you. You can go back and forth on that, but fundamentally what you’ve got is a historic watershed that is now showing up in the presidential election. Both party trying to move in the direction of reform.

If they want to go record to record, here’s reality. Trump can say, “I was better than the Obama administration on legislation” because he passed the first step back. And he’s worse than the Obama administration, in other words, the Department of Justice under Trump has actually gone backwards, has not implemented the First Step Act well enough, so Trump can be strong and say I’m better than you on legislation. Biden can say I was better than you on administration, so they both have strengths and both have weaknesses, but I’m just jumping up and down because we now have both parties saying they want to do better, and that’s a good thing. We’ve got to give Trump credit where credit is due. he worked hard to pass the bill, and he made it possible for other Republicans to also be in the pro-criminal justice camp. That is a positive thing. He’s going to play politics with it, that’s what politicians do. But now you two parties that are healthy and that is good.

BRIANNA KEILAR, CNN: Here you’re saying there’s a silver lining, maybe even a gold lining as you’re describing it, but the politics of this. I’m curious what you think about this. Look, we know Trump, when you look at his past, he’s not the ideal messenger on the issue of criminal justice despite the signing of the recent bill, right? He took out full-page ads and called for the death penalty of the Central Park Five, those five teens who were convicted in the rape of a Central Park jogger in 1989, and knowing they were innocent he still questioned their innocence. Politically speaking does that matter? Because his supporters don’t seem to be dissuaded by that. But on the flip side, will Democratic voters be deterred from supporting Biden from his past with the Crime Bill?

VAN JONES: This is going to play itself out over a period of time. Trump owed a lot of people apologies. If he wants to encourage Biden to apologize, Biden probably will get around to apologizing for it — Bill Clinton has, I think Hillary Clinton has. If we’re going to go down the apology road, Trump has still not apologized to the Central Park jogger, a mishandled case, so that stuff will go back and forth.

Here’s what I wanted to add as well. Look, you now have an opportunity, I think, for Biden to get out of this situation. He’s going to have to resist the temptation to go back and say, well, listen, this part of the bill was good and that part wasn’t good, whatever. Just say listen, we did what — tried our best at that time and here’s what we wanted to do in the Obama administration to make it better Republicans stopped us. And here’s what I could do if I were there.