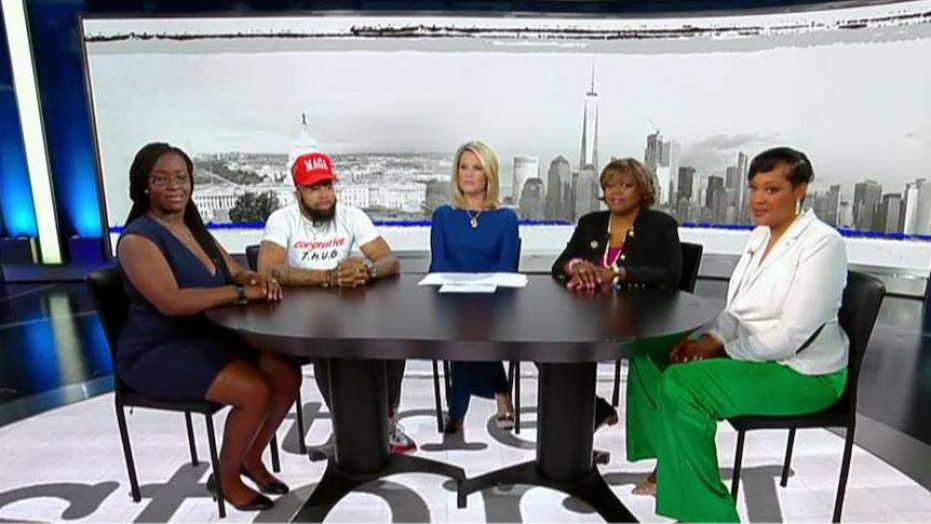 Democrats are frantic. For decades, they have taken the black vote for granted. Today, there are signs that empty promises and radical leftist social policies are leaving black voters behind. Worse, polling shows that President Trump is picking up support from black voters. Having tarred the president as a racist and bigot, liberals cannot imagine that even one African American could possibly choose to support him. They are in denial, and it could cost them the 2020 election.

Democratic candidates are promising the moon to win over black voters. Reparations, massive support for historically black colleges, bail reform — everything is on the table. But there are signs that the candidate racking up the most consequential wins with minority voters is Trump.

Nothing — nothing — could be more threatening to Democratic prospects in 2020.

In a recent interview with CNBC, BET founder and billionaire Robert Johnson suggested that Trump’s reelection is “his to lose.” As a prominent black businessman and faithful Democrat, Johnson’s views are noteworthy. He cites the increase in black employment and the strong economy as helping Trump, as well as the leftward lurch of Democrats. “I do not see anybody in the Democratic primary race today that is enough in the center where I believe most of the voters are, and particularly where most African Americans are,” Johnson said.

Black activists say Johnson’s wealth puts him out of touch with mainstream black voters, and dismiss his concerns. But recent polling suggests Johnson is on to something.

Two polls, one by Emerson College and one from Rasmussen, put black support for Trump at or above 34 percent. Those soundings so alarmed Trump critics that a horrified CNN host described the two polls as “fake” and sarcastically suggested that only Kanye West and other black Trump surrogates had been surveyed.

The Emerson poll showed 34.5 percent of black registered voters supported the president, up from 17.8 percent a month earlier. The poll had a margin of error of plus or minus 8.3 points. Rasmussen showed the president with 34 percent approval from blacks.

Most polls put the president’s approval among black voters at about 10 percent. But it is worth noting that Trump won only 8 percent of black votes in 2016; as dismal as that showing was, it was better than that of John McCain in 2008 and Mitt Romney in 2012. And, as modest as 10 percent is, it’s better than his tally in 2016.

In 2016, Trump asked black voters, “What do you have to lose?” He hit a nerve, and while only a small fraction of that cohort pulled the lever for Trump, turnout among blacks receded to pre-Obama levels, which could well have cost Hillary Clinton the win.

This year, he has ramped up his outreach to African Americans, and it may be getting some traction. In the 2018 midterms, Democrats carried 90 percent of the vote in House contests, obviously a huge majority, but that was shy of the 93 percent that voted for Hillary in 2016. While Democrats are scoring better with white suburban women, they appear to be slipping among blacks.

Why not? Trump signed the most consequential criminal justice reform bill in decades and is presiding over an economy that has delivered rising incomes and jobs to even the most vulnerable Americans, like ex-felons. The poverty rate is at the lowest level since 2001 and fell last year by 0.9 percent among blacks. Black unemployment is at record low levels and in recent years, gains in median household income for blacks have exceeded those of whites in most metropolitan areas.

In October, the Trump team launched Black Voices for Trump in Atlanta, with the president vowing to “campaign for every last African American vote in 2020.” In that inaugural address, the president told several hundred African American supporters, “the Democratic Party already left you a long time ago.” He added, “If you don’t want liberal extremists to run your lives, then today we say welcome to the Republican Party.”

Those remarks point to a real problem for the left: black voters tend to be more conservative than other Democrats. While Sen. Elizabeth Warren, D-Mass., and Pete Buttigieg are busily rounding up progressive primary voters, they are leaving many blacks behind. Joe Biden is leading with that group. Some of his popularity no doubt stems from having served as vice president to President Obama, but it is also because Biden is a more moderate candidate than many of his rivals.

In sparring with the four progressive women of color in the House known as the “squad,” Trump may have offended liberal editorial writers, but it is unlikely he lost much support from black voters in Georgia. Research cited by the Times shows that over the past few decades, “The African American electorate has been undergoing a quiet, long-term transformation, moving from the left toward the center on several social and cultural issues.”