Jacksonville, NC, primarily known for Marine Corps Base Camp Lejeune, was established as the United States entered World War II. Today its 14 miles of beaches remain a major area for amphibious assault training, and its location between two deep-water ports (Wilmington and Morehead City) allows for fast deployments. It also has roots in Black history. 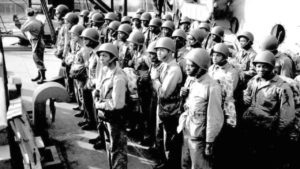 After Pearl Harbor, President Franklin D Roosevelt issued the order to admit African Americans into the Corps. From 1942 to 1949, approximately 20,000 African American men were admitted to the Marine Corps, the last branch of the service to do so.
Segregation caused these men to train at a separate part of Camp Lejeune called Montford Point, where they had to “fight for the right to fight.” In doing so, they faced some of the strongest drill sergeants the corps could find, other African Americas to push them physically and mentally to withstand tests that surpassed the high standards used for white Marines.

The Montford Point Marine Association and the US Government is searching for lost members of those first African American Marines who trained there to fight in WWII.

During the Pacific Campaign, the Montford Point Marines were called into service, first as defense units holding land far behind the front or as ammunitions carriers; they saw little action. Later, about 8,000 black Marine stevedores and ammunition handlers served under enemy fire during offensive operations in the Pacific. 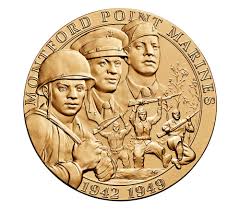 However, a bigger problem loomed for these Marines. No detailed records were kept on these thousands of men because they were never expected to succeed. They, however, surpassed all expectations.

The Montford Point Marines’ swere recognized in 2012 when all men known to have served were awarded a Congressional Gold Medal. With no official record of those who served from 1942 to 1949, the Montford Point Marine Association has sought to recognize and continue awarding the medal to the families of the men who served. If you know of one who may be unrecognized, please call Carman Cole, National Secretary at (706) 840-1789.