Michelle Obama once said, “Our love, our gratitude, our admiration for our men and women in uniform, our veterans and their families – all of that is bigger than any one party or any one election.”

In the same spirit of support for vets, the Usher Ministry, number 3 of Emanuel Missionary Baptist Church proudly hosted their 17th annual Patriotic Breakfast last weekend.  The event had over 150 guests in attendance in support of local vets, and many attendees representing veteran support agencies.

The festive event, which was free for all active military and veterans, opened with everyone standing and reciting the Pledge the Allegiance followed by a rousing rendition of the national anthem. Many guests were patriotically adorned in red, white and blue as they witnessed the presentation of the Color Guards presented by Ribault Senior High School Marine Corp Junior ROTC.

The program speaker was centenarian veteran Sollie Mitchell who informed the audience of his stint in WWII, participation in the 1963 March on Washington with Dr. Martin Luther King, Jr. and his tenure on the railroads as a Pullman Porter until he retired in 1981.  Also on the on the dais was guest speaker Lieutentnat Colonel Yasmeen Neal speaking to the attendees on her military service and accolades.

The breakfast was also held in memory of former usher president Margaret Britton, who was the inaugural organizer of the breakfast. Each of the 25 veterans in attendance who served in the Vietnam War received a pin and certificate of recognition for their service. 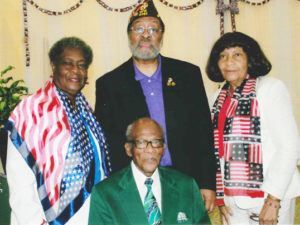