By Aramide A. Tinubu – The disregard of Black life in pursuit of the American dream is ingrained in our history. Lee presents it in technicolor for audiences in this film.

In Netflix’s “Da 5 Bloods,” Spike Lee takes his audience on a journey across the decades, putting a spotlight on the Black veteran experience in a way few filmmakers ever have. In doing so, he successfully links a film nominally about the Vietnam War to today’s cultural battles. 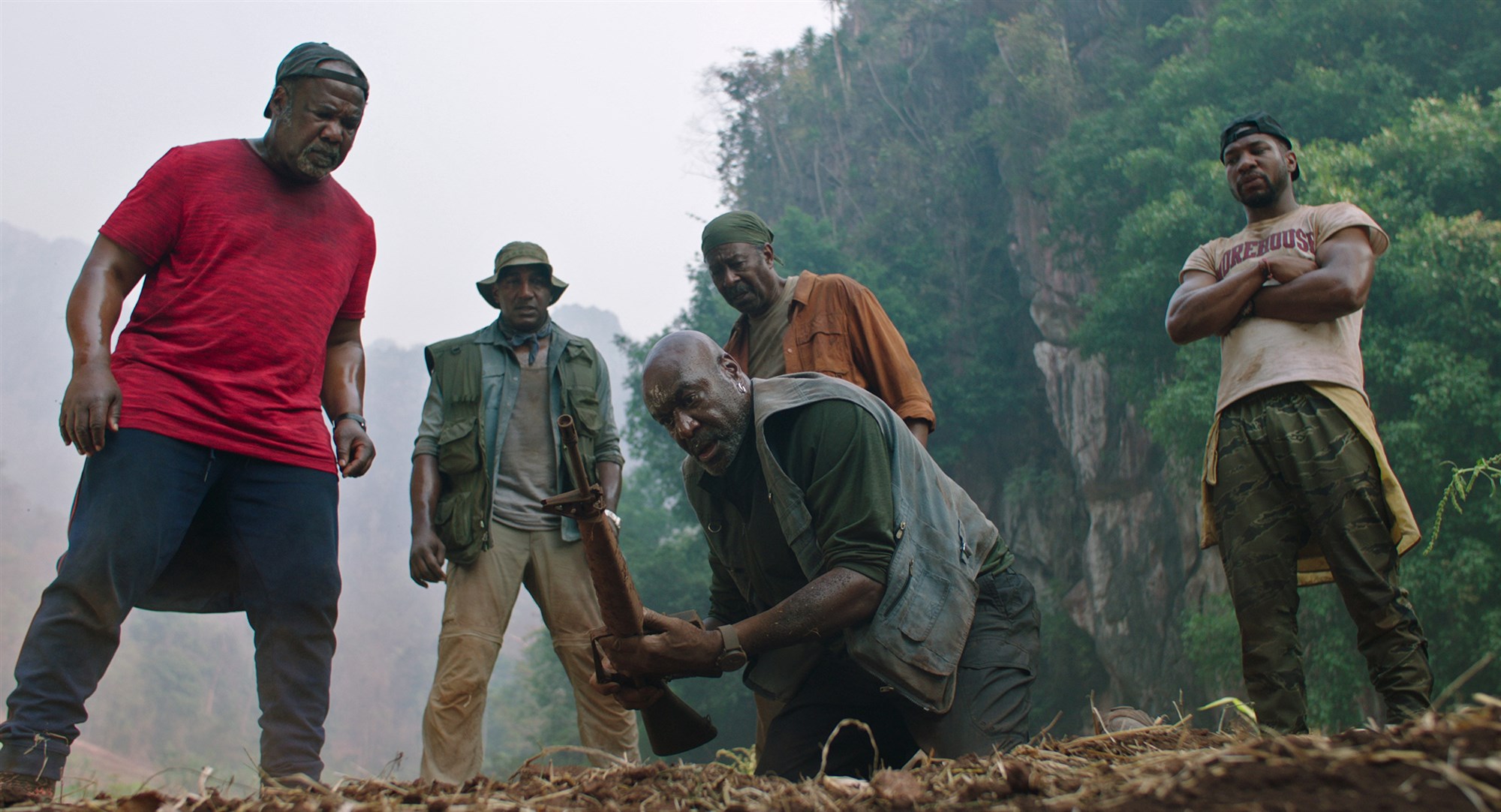 The film follows four Vietnam War veterans who call themselves Da Bloods — Otis (Clarke Peters), Eddie (Norm Lewis), Melvin (Isiah Whitlock Jr.) and Paul (an absolutely gripping Delroy Lindo) — as they return to Vietnam to retrieve the remains of their fallen comrade and the fifth Blood, Stormin’ Norman (Chadwick Boseman). Norm died in Vietnam, but his guidance and teachings on Black history and the Black experience have remained with his brothers throughout their lives.

Lee’s film is sweeping and gritty — almost in juxtaposition to his picturesque World War II feature, “Miracle at St. Anna.” Opening with Muhammad Ali’s speech on why he opposed the Vietnam War, “Da 5 Bloods” tells the story of the Black veteran in a way that only a Spike Lee Joint can. Though this is the story of a group trip, it’s mostly centered around Paul — a MAGA hat-wearing, enraged Black man suffocating under the weight of his post-traumatic stress disorder and the circumstances surrounding Norm’s death. Though he spouts ignorant rhetoric and speaks openly about voting for Donald Trump, Lee and Lindo never allow the character to become a caricature. Paul wears his fury, pain, paranoia and trauma like combat gear. Lee makes it clear that America made Paul into this.

During one pivotal scene, Otis schools the Da Bloods’ guide Vinh (Johnny Tri Nguyen), when he suggests that George Washington is the founder of America. Otis explains that Washington would not exist without the labor of the 123 Black people he owned to prop him up.

And, of course, there are other discussions about white wealth and black death: At another point, Otis says, “They put our poor Black asses out here on the front line,” and Melvin adds, “Killing us like flies.”

Lee drives home his point even further with Paul’s adult son, David (Jonathan Majors), who accompanies the four buddies on their trip. Though he’s wearing a T-shirt from the esteemed Morehouse College for much of the film, David finds himself in the same war zone that his father never truly escaped. Being a “respectable” Black person, Lee’s film says, guarantees you nothing.

Though it might be the most evocative Vietnam War film in recent times, Lee certainly isn’t the first director to capture the Black veteran experience on-screen.

In 1989’s “Glory,” Denzel Washington portrayed the formerly enslaved Private Trip as he was beaten and humiliated in front of the 54th Massachusetts Infantry Regiment. Although “Glory” is literally about one of the Union Army’s first all-Black volunteer regiments, film director Edward Zwick had to fight for true Black representation in it, rather than a focus on the white officer. (Nearly 30 years later, Michael B. Jordan would use the scars on Trip’s back and Washington’s evocative performance as inspiration for his “Black Panther” anti-hero, Killmonger.)

Then, in 1995, two very different films about the Black veteran experience premiered. The HBO movie “The Tuskegee Airmen” focused on the racism and injustices that the all-Black 332nd Fighter Group faced in the Deep South during World War II. These prejudices continued even as they were called upon to protect their white counterparts who were dropping bombs on Germany. (In 2012, Anthony Hemingway would direct the glossy — though less effective — “Red Tails,” which introduced a new generation to the Tuskegee Airmen’s story.)

Fresh off their chilling “Menace II Society”, the Hughes Brothers that same year delivered their take on the Black veteran experience with “Dead Presidents,” in which Anthony Curtis (Larenz Tate), returning home from the Vietnam War to the Bronx, finds only dead ends. The realization leads him down a road of destruction in an ill-fated attempt to take what he felt he’d earned.

The idea that Black American veterans’ battles have extended well beyond their tours of duty was also beautifully captured by Dee Rees in 2017’s “Mudbound,” a story of two families — one Black and one white — stuck together on a rural Mississippi farm. Their lives are altered forever when the end of World War II brings their loved ones home. Rees depicts the injustices that the Jacksons’ eldest son, Ronsel (Jason Mitchell), faces upon returning to the Jim Crow South after living freely as a sergeant overseas.

More than that, “Mudbound” explores, more explicitly than its predecessors, how and why so many white people feel so comfortable with telling Black people how they should feel about American patriotism.

Black Americans cannot afford to buy into the patriotism to which white Americans often cling; too much has been done to us, often in its name. Black veterans and Black people overpaid for our rights to live and thrive in this country only to often be denied one, the other or both. Therefore, it is our right to either stand in reverence of Old Glory or turn our back on her in disgust.

The disregard of Black life in pursuit of American “freedom” is ingrained in our history, but Spike Lee’s “Da 5 Bloods” also presents it in 154 minutes of shocking technicolor with a haunting acoustic version of Marvin Gaye’s “What’s Going On” draped over it. Fittingly, Lee chooses to close his latest film with Langston Hughes’ eloquent poem, “Let America Be America Again.” The lines read, “America never was America to me.”

Black blood has been spilled on the battlefields and in the streets of this nation from well before this country was even founded and every day afterward. Yet, the promise of America has never come to pass for us.

Aramide A. Tinubu is a film critic and entertainment writer who has been published in EBONY, JET, ESSENCE, Bustle, The Daily Mail, IndieWire and Blavity, and writes at her blog, Chocolate Girl in the City.