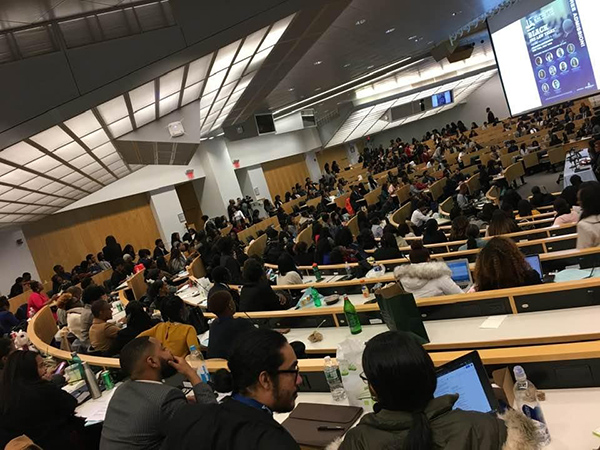 New York, NY — Hundreds of people from across the country came together from November 8th to November 9th, 2019 for the 15th Annual National Black Pre-Law Conference and Law Fair 2019 Sponsored by AccessLex Institute. This year’s event was hosted at Columbia Law School in New York City, New York. With nearly 700 aspiring Black law students in attendance, this conference brought together the largest number of Black law school aspirants gathered in one place for any one pre-law event in the country. In addition to the pre-law attendees, pre-law advisors as well as parents and supporters also attended. Further, over 170 law students, lawyers, and law school, law firm and non-profit administrators served as speakers, panelists, presenters, honorees, advisors, networking facilitators and volunteers to encourage, empower and support future Black law students. The goal of the conference was to provide law school aspirants with information, resources and connections they otherwise would not have access to in order to help make them more excellent, strategic and competitive law school applicants and law students.

This year’s event included informational workshops on understanding legal education pedagogy, Law School Admission Council resources available in the admissions process, crafting the law school personal statement and diversity statement, strategically applying to law school, and financing one’s legal education. There were also robust panel discussions on how Black law students can have a successful law school experience, and ways that Black lawyers can use their legal training to do meaningful work and help uplift the Black community. Moreover, one-on-one pre-law advisement sessions were held so that prospective law students could receive personalized advice and feedback. Additionally, there was a law school recruitment fair featuring over 130 exhibitors which showcased more than half of all ABA-approved law schools as well as some non-profit organizations, employers and programs targeting pre-law students.

Keynote speakers included legal powerhouses in their own right. The first keynote speaker was celebrated Stuart, Florida-based attorney Willie E. Gary, Esq., who is well-known nationally as “The Giant Killer” who earned the highest jury verdict ever – $23 billion – for a wrongful death case against one of America’s largest tobacco companies. The second keynote speaker was Cannon D. Lambert, Sr., Esq., a successful Chicago, Illinois trial attorney, who is best known for representing Sandra Bland and her family. Sandra Bland’s police stop, wrongful arrest and unexplained death following her detainment helped bring more attention to the mistreatment of Black women by law enforcement during the Black Lives Matter Movement. Attorney Lambert was able to obtain a $1.9 million settlement for Bland’s family, and also force historic mandatory changes in jail policies.

The conference ended with the 15th Anniversary Honors which recognized persons who have contributed to the conference by giving of their time and talent throughout the years. Outstanding individual supporters received the Legal Education Access and Diversity Champion Award and outstanding law schools who have supported every year or nearly every year received the Outstanding Law School Diversity Outreach Award.

As is the tradition with every conference, it ended with the Aspiring Lawyers Pinning Ceremony which was presided over by Judge J. Machelle Sweeting, a judge at the Family Court of the City of New York, who led the law school aspirants in a spirited rendition of the “Aspiring Lawyers Success Pledge.” Judge Sweeting surprised pre-law attendees with the generous invitation and opportunity to visit and intern in her chambers. Immediately thereafter, current lawyers pinned future lawyers with eagle pendants and congratulated them on their decisions to move forward in their plans to pursue law school.

This annual powerful and jam-packed conference weekend celebrated 15 consecutive years of empowering and inspiring aspiring Black lawyers since its founding in 2005 by a first-generation college and law school graduate Evangeline M. Mitchell. Attorney Mitchell had written books, created an informational website, founded a Black pre-law organization, and spearheaded other initiatives to help Black students interested in law school. But after all of these efforts, she created the conference because she wanted to do something greater in terms of outreach that was more impactful than previous work she had initiated or had seen being done.

Reflecting on 15 consecutive years of organizing and hosting the event and her future plans, Mitchell said, “I am proud of what we have accomplished because we have helped thousands of Black people with law school aspirations. But the reality is that we still have so much farther to go in terms of increasing the numbers of African American law students and lawyers. The path to becoming a lawyer is challenging and there is an urgent need for more people fighting for issues that affect our communities especially in our current times. I am more committed than ever to move forward and continue the conference, to make it bigger and better – and at the same time, do even more beyond it.”

When asked about the significance of the event and what she wanted participants to take away, she stated, “The most important thing that I want participants to see and understand from attending this event is not only that we need more Black lawyers, but that this is a grassroots, collective effort. All of these people have come together for them because we care about them. They are not alone. They have a community who is rooting for them, who wants to see them succeed and who wants to help them achieve their goals. To me, that is what this conference represents. It’s a public demonstration that Black law students and Black lawyers and their allies want to proactively help support the next generation of Black lawyers. They are our legacy. Their success is our success. We are not successful if we don’t reach back.”

The event is offered completely free of charge and is open to all. For updates and information about next year’s event which will take place in Cambridge and Boston, Massachusetts in November 2020, please visit the official conference website at www.blackprelawconference.org.