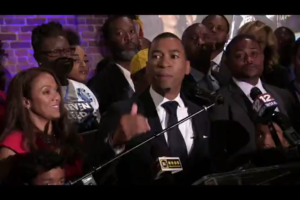 Montgomery, a city where more than half the population is black and known as the birthplace of the civil rights movement, elected an African American to the highest position in municipal government for the first time in its 200-year history.

Steven Reed, the Montgomery County probate judge, on Tuesday beat television station owner David Woods in a runoff, gaining 32,918 votes to Woods’ 16,010 votes with 47 precincts of 47 precincts, according to incomplete, unofficial returns. He will be sworn into office Nov. 12 at Montgomery City Hall.

Montgomery is one of only three cities in six Deep South states with a population of 100,000 or more that had not previously elected an African American as mayor. Beginning in the late 1960s, the election of first black mayors in Cleveland, Ohio, Newark, New Jersey, Detroit, Michigan, Gary, Indiana, and Los Angeles manifested black power, said Derryn Eroll Moten, chairman of Alabama State University’s Department of History and Political Science.

The city being led by a black mayor is an achievement pushed forward by defining moments during the civil rights movement. The outcome of the Oct. 8, 2019 election is a product of the key figures who fought for civil rights from Alabama’s capital like the Rev. Martin Luther King Jr., Rosa Parks, E.D. Nixon and Johnnie Carr.

Changes materialized in the South in the wake of the Voting Rights Act in 1965, with the election of Sheriff Lucius Amerson in Alabama and the election of Julian Bond to the Georgia House of Representatives. Both were elected in 1966 and became the first African Americans to hold these offices since Reconstruction.

Some say it’s a paradox that Montgomery is both the birthplace of the civil rights movement and the cradle of the Confederacy. Others say it shows the resilience of African Americans that a city with a history of slavery, lynchings, white supremacy and Jim Crow laws elected its first black mayor Tuesday.

Montgomery is going through a noticeable transformation. Last year, the Equal Justice Initiative opened the National Memorial for Peace and Justice and the Legacy Museum in downtown Montgomery to honor victims of lynching. The memorial is adjacent to the slave market site in Montgomery. It has brought several hundred thousand visitors here, many who wouldn’t have visited the Deep South otherwise.

There are outside investors building downtown hotels for those visitors, and a new whitewater park and outdoor center is planned near downtown. The multimillion-dollar investment is in a near west side neighborhood inhabited predominantly by black families. It’s one of the poorest areas, in need of development but often overlooked.

Before the election results were announced, local historian Richard Bailey predicted the voters would show Montgomery’s progress since those days of racial terror. Reed’s election is the latest example of the city reconciling its past and planning for a better future.

Now, it’s the future that Reed must lead the city into.

Big changes are coming for Montgomery with the election of Reed and three new members on the City Council. The last three mayors held office for at least a decade. Mayor Todd Strange did not seek reelection.

“Montgomery is a city with limitless potential, a city that has no limits outside of our imagination,” Reed said. “The only thing that can hold us back is our fears. When we come together there’s nothing that we can’t accomplish. “

Reed said he wants to invest in public transportation and address the issue of brown water and food deserts in some of Montgomery’s communities. He talked about elevating the economy by being more receptive and supportive of young talent and making the off pace city more competitive. He mentioned working with real estate developers so artists can receive discounted rent for work space.

He said he was open to an ad valorem tax that would increase the millage rate for public education funds. He’s repeatedly mentioned a full day, universal pre-K program. The program would guarantee children a spot regardless of their family’s income as early childhood education can be expensive for low-income families.

Reed will be charged with overseeing the city’s $260 million budget that was adopted Sept. 17. He’ll deal with continued pressure on the internal service fund used to pay employee medical, dental and retirement benefits. Another issue he will take on is finding funds for salary increases for public safety employees to recruit, retain and address the issue of crime in the city.

“I’m aware that I didn’t get here by myself. It took all of you on the record, off the record, on the table, under the table,” Reed said. “All the things you have done to support this vision.”

David Woods, Reed’s opponent, told his supporters while conceding, “Going forward, we would have made Montgomery, the city of your dreams. And it is a great city. I think it’ll still be a great city because the people who were here yesterday are here today, and they’ll be here tomorrow. And as I continuously say, Montgomery is a special place populated by special people.