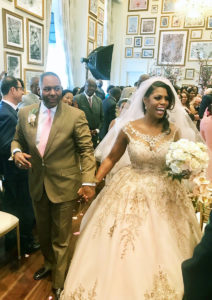 Manigault, 43, had originally planned on exchanging vows with Newman, 61, in Jacksonville on March 25, but ended up rescheduling and changing locations after getting death threats.

Trump and several of his senior White House staff members did not attend because they are spending the weekend at the President’s Mar-a-Lago resort in Palm Beach, according to Politico.

Manigault and Newman met while she was teaching at Howard University in the nation’s capital. They got engaged last July after less than a year of dating. Newman proposed to Manigault in front of a crowd of churchgoers during a service at his church..
Manigault indicated she was nearing her big day earlier in the week when she shared an assortment of photos with her White House colleagues celebrating her nuptials via social media.

Manigault earned a big following as the villain on the first season of “The Apprentice,” which was hosted by Trump. She was the ninth of 15 contestants fired that season.

She joined Trump’s staff as a director of African-American Outreach during his presidential campaign last July and now serves as a director of communications for the Office of Public Liaison. She also boasts the title of assistant to the president.
The former reality star recently appeared on an episode of TLC’s wedding show “Say Yes to the Dress” that netted her $25,000 worth of merchandise for their wedding.