Crime is no stranger to the Families of Slain Children Inc. (FOSCI) staff, volunteers, community partners and the families impacted by homicide in Jacksonville.  FOSCI is a community-based organization founded 13 years ago to help families who have lost their children at the hands of violence.

Founder Beverly McClain lost her son in 2005 to homicide when he was found dead in Trout River in North Jacksonville.  To this day no one has been arrested for the crime.

When asked how she overcame her grief, McClain says, “On my Knees every minute, every second, every hour and every day.  The death of a child is not something that goes away overnight.”  Since her loss, the mother turned activist has tirelessly combed the community to help others that have been affected by a homicide.

Earlier this year FOSCI, located on Myrtle Avenue, was in jeaparody of loosing its office and community outreach building. For more than ten years, the organization’s rent was only one dollar thanks to the kindness of the building’s owner.

McClain said ten years ago when she moved into the two story building and it was condemned, but through donations and hard work the organization turned the structure into a place of hope for crime victims.

A victim’s memorial wall was also erected on the property listing the many victims of homicide in Northeast Florida since 2006.

Recently, the landlord decided to sell the building and asked FOSCI to either purchase or vacate the property.  Not having the resources to purchase the building, McClain reached out to local news outlets asking for help.  No sooner than the segment aired, Beverly received a call from Michael J. Ward, former Chairman and CEO of CSX Corporation.

“I saw the story and immediately wanted to help,” said Ward. “For 13 years, Beverly has done a fantastic job with the center. There’s still more work to do.” Ward and his team set up an appointment with McClain toured the facility and were impressed with the center’s goals and mission.

Once negoiations for the purchase of their existing facility became difficult, Ward and McClain scoured Northwest Jacksonville for a new building to house FOSCI. Still on her knees, McClain and Ward stumbled on the former Duval County Teachers Credit Union building, a place where black teachers could start savings accounts and borrow money at a time when African-Americans’ lack of access to financial institutions left them vulnerable to loan sharks and predatory lenders.

Ward proudly purchased the property and donated the structure to FOSCI and also donated $30,000 with a challenge for community trustees and philanthropist to match the funds.

On November 30th, McClain and Ward closed on the property with the cheering of family, staff and friends.  Still located in the heart of the urban core, McClain and her team will continue to advocate for victim’s rights.

“I’m so excited to have the keys. Mr. Ward is a blessing. That’s why I stay on my knees praying.  We can now continue our work and not lose one second of our ability to console the hurting families in our city. This violence has to stop.” said McClain. 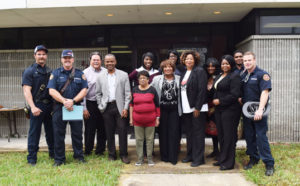