By Lynn Jones – For more than 20 years, Comedian Cocoa Brown has spewed comedic jokes across the country! You’ve seen her in the movies and she is now co-starring in the hit show 9-1-1 currently airing on the Fox Network. Her comedic roots began as a young lady in school making her classmates burst out laughing!

Cocoa has graced the stage around the country telling jokes that are truthful, authentic and relatable to today’s hot topics. Her edgy comedy makes you laugh out loud at yourself!

Her daily life consists of raising her six-year-old son. Cocoa boasts that her six-year-old is currently ranked in the ten percentile ranking of top math scholars in the Nation. She smiles through the phone as she relates that being a mother is her ultimate accomplishment.

As an entertainer, actress and mother, her style of comedy is built on putting in work traveling, mentoring and reaching back to help other comedians. Cocoa admits that her role models growing up were women who exuded stature, style and grace, “My role models were my mother, my aunties, Lena Horne, Dorothy Dandridge, the Clara Huxtable’s and other African American women from back in the day that were built to last, had true talent and a decorum that exemplified womanhood.”

According to her website, she has also appeared in the films: “Lakeview Terrace” with Samuel L. Jackson, Tyler Perry’s “Single Moms Club” and garnered a nomination for a Screen Actors Guild award.  Brown has her sights set on an Oscar, an Emmy and a Pulitzer Prize. She is writing a revealing autobiography and producing her highly anticipated one-woman show, “Confessions of a Suicidal Diva”.

Cocoa continues to put in work with her nonprofit, “Wigs of Love,” dedicated to making everyone a Star! Wigs of Love mission is: to make you feel like a beautiful, shining star again with a star studded make over.   Wigs of Love provides premium hair pieces and wigs for women who have lost their hair due to lupus or chemotherapy treatment.   For more visit www.wigsoflove.biz. Alright now here she comes to Jax, the one, the only comedian that keeps it real – Cocoa Brown back in town! For tickets and more info visit www.jacksonvillecomedy.com. 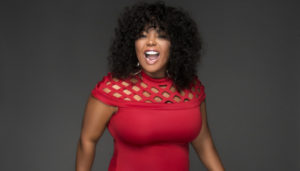