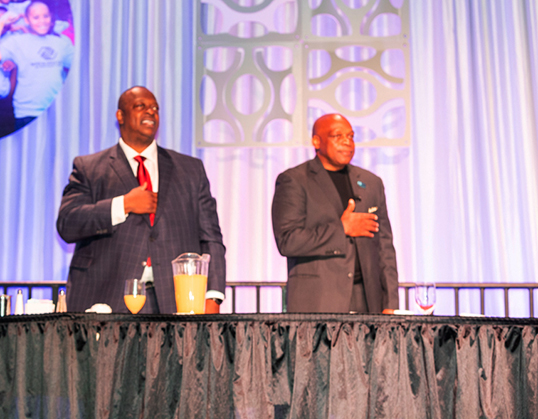 By Lynn Jones
In the tale of two city events, on Friday, January 17th, the National Association for the Advancement of  Colored People (NAACP), in concert with former Mayor Alvin Brown, SCLC and the African American Ministers Alliance Council held a sold out breakfast in honor of Martin Luther King, Jr. simultaneously with the city of Jacksonville as they presented their 33rd commemorations.  The city’s breakfast was held at the Prime Osborn Center and a few miles away, the NAACP breakfast convened at the Hyatt Riverfront. Both of the breakfast touted big name speakers including MLK, III and Coach Ken Carter, an author, speaker, education activist and former high school basketball coach portrayed by Samuel Jackson in the movie, “Coach Carter.”
Local dignitaries, friends and guests were on the front line to hear MLK, III discuss the next steps for economic empowerment and the pressuring issue of voting in the upcoming 2020 elections.
“My father used to say, a voteless people is a powerless people and one of the most important steps that we can take is that short step to the ballot box,” said King, III to the largely African American crowd at the NAACP Breakfast.
Carter gave a motivating speech and was applauded for his tenacity, while praising Mayor Curry for his work in the African American community.
Despite the appearance of divisiveness, the NAACP breakfast attendees and speakers made it clear to note that local African American communities have and will continue to thrive with or without city, “diversions.”