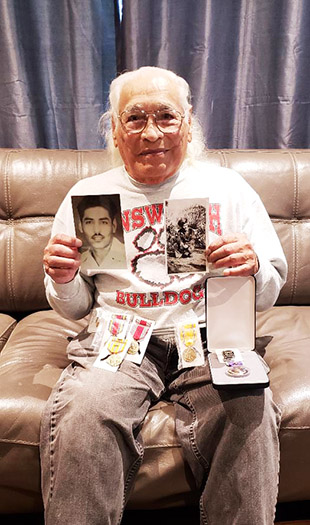 Born December 24th, 1917 in New Mexico, Andrew O. Elias has traveled around the world for work, war and women! At age 15, with permission from his aunt, he joined the army and began his military career as one of the elitist combat achievers in the nation.  With a 5th grade education, Elias was eager to begin his career and take charge to alter his family’s trajectory. His baby sister and brother were in the care of his aunt, once he enlisted, Elias sent every penny home to care for his family.

Elias personality is one of laughter and stories that turn into life lessons and surprise endings. One of his funny stories include the time he went to pick up his wife at the train station and was perplexed, as he didn’t remember how she looked.  Even though she was taller than him, he eagerly asked women in the lobby if they were her and Elias thought, well wait a minute, “how bout I just let her find me.” When you laugh at the thought of someone not knowing you, you burst out laughing and Elias laughs with you! Another story expounds on his days in the military and his covert missions. A prominent mission he discussed was where 300 soldiers were chosen for a war mission, 39 came out of alive and yes Elias was one of them!

After serving in the army for many years, Elias was awarded the Purple Heart, and many other awards for his military bravery and service. “I’ve always been a happy go lucky guy.  I love to laugh and make people happy.  My war stories are filled with circumstances that couldn’t be denied.  I’m proud for my record, my family and my success to have lived over 100 years,” said Elias.