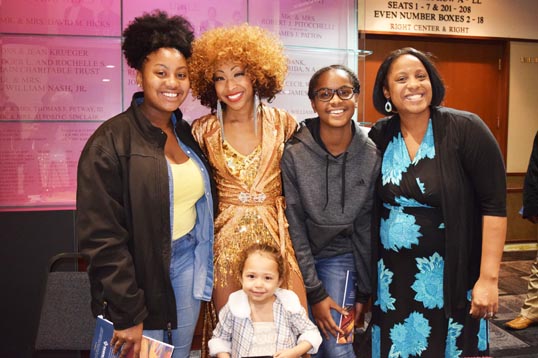 Songstress N’Kenge took to the Times Union stage this past weekend to belt out songs in the Jacksonville Symphony production of “Legends: Billie Holiday, Diana Ross, Leontyne Price, Beyoncé and more!” Symphony fans were in awe of the singers range and her dedication in honoring legends in song.  Her next role is the production of a Dorothy Dandridge musical. When she has time off, N’Kenge volunteers with musical nonprofits teaching music and mentoring to underserved students who are eager to develop musically and train and study around the world. Shown is N’Kenge after her performance with fans signing autographs and students Jahnique, Jah’niyah, and mother Whurriah Lys and Legends producer and star N’Kenge and her daughter Jahzara Pacurar.